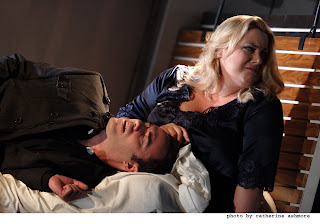 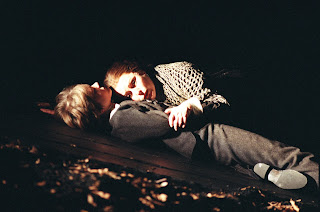 That's to say, not as in Forster's 'two cheers for democracy', but one resounding cheer at the beginning of the week for James MacMillan's The Sacrifice, hitting London for the first time, and another, more predictable one for Britten's The Turn of the Screw at English National Opera on Friday. The production pictures show Leigh Melrose as Evan and Lisa Milne as sacrificial offering number one Sian in Katie Mitchell's Welsh National Opera production of The Sacrifice (copyright Catherine Ashmore); and George Longworth as the dead Miles mourned over by Rebecca Evans's Governess in the ENO Turn of the Screw (copyright Neil Libbert).

For me, the MacMillan was the more shattering event of the two - perhaps because it was so fresh, so punch-packing and also because I'd completely forgotten what I'd read of the plot's most shocking twist and found myself unable to move from my seat at the end of Act 2. MacMillan and his librettist, poet Michael Symmons Roberts, have adapted a powerful tale from the Mabinogion to the present (or an imagined future), distilling the age-old situation of love thwarted by tribal hates and an implacable cycle of revenge. Isn't it odd that Adrian Mourby, in the Screw programme, writes how the 20th century had 'had its fill of star-crossed lovers caught between emerging nation states'; and yet here in the 21st is a myth which speaks as powerfully to us as Romeo and Juliet, with a further savagery all too familiar from world events today.

MacMillan serves Symmons Roberts's spare, eloquent and often piercing lines with all the devices opera has always used to move and terrorise its audience: memorable lyric phrases prevented from becoming cliched by their unusual shape and the often acid harmonies supporting them, violent dance music punctuated by crackling choruses - surely the most vigorous in British opera since Peter Grimes and Billy Budd - and, in the third act, ritualistic scenes of mourning and, finally, a tentatively hopeful pezzo concertato of which, as one reviewer justly wrote, Verdi might have been proud.

The contemporary music mafia sees it as a sell-out: good heavens, direct communication, tunes, duets, ensembles! But it rarely seems contrived - I even 'bought' the love-scene at the heart of the opera, after resisting its obvious setting-up for a minute or two. And the vocal writing, though clearly strenuous, especially for the men, is surely the most speech-melodic since Britten and Janacek: although Adams made a good shot of it in Nixon in China, this is where Ades (unintentionally, I think) and Birtwistle (with a quite deliberate angularity and instrumental leaping-about) part company with the truly great opera composers. As for the archetypal action, Katie Mitchell's fluid production and the lacerating commitment of some of our finest singing-actors stopped it sliding into black and white. Lisa Milne's Sian, the girl who makes a marriage of convenience in an attempt to bring two warring factions together, was moving to tears in her Act 3 lament, and always truthful in her simple dignity; Christopher Purves as her father, the General, brought all the intensity and focus which stunned us in his Wozzeck, also for Welsh National Opera. In the pit, the sounds conjured by JMacM ranged from the bewitching spider-web of soft sound in the Prelude to the razor-sharp Celtic snaps of the dangerous celebrations.

There could be no doubt that all the operatic mechanisms were working at full pelt in one of the 20th century's most rigorous masterpieces: The Turn of the Screw stands alongside Wozzeck in its phenomenal musical organisation made manifest in every stage of the drama. Throughout the four weeks I've spent on the opera in my City Lit classes, we've been terrified by Katie Mitchell's atmospheric film - also starring Lisa Milne, a rather radical departure from the 'mostly in the mind of the Governess' theory which James surely intended but convincing on its own terms - and Luc Bondy's visceral Aix production. David McVicar at ENO never put a foot wrong in terms of a sensitive, ambiguous presentation: the children never see the ghosts except in the dream sequences, but are clearly haunted by their awful recent history, while the Governess is an easily flustered, hot-headed young woman who's read too many romantic novels rather than an up-tight neurotic. But there was a problem in the hugeness of the ENO stage and the sets, not always ideally lit though very haunting when darkness triumphed.

My biggest disappointment came in the climactic interlude where the celesta makes the ghost of Quint manifest and the horn plays the 12-note 'Screw theme' for the first time in its entirety since the introduction. It was almost obliterated by the servants sliding on the creaking screens and shunting the scenery about, which took me back to my days as a Hesse student at the Aldeburgh Festival in 1983. I was privileged then to assist the adorable, stalwart Aldeburgh caretaker and stage manager Bob Ling with the scene-shifting for the Britten-Pears School's production (Lynne Dawson was the first of the two Governesses, fresh from music college; Helen Charnock led the second cast). Helping out Basil Coleman's revival-on-a-shoestring, we had to push around the noisy leftovers from the previous year's Eugene Onegin, and they made a heck of a noise during the interlude-variations. Myfanwy Piper, a rather intimidating lady, and Sir Peter Pears were much displeased, but there was nothing we could do (and it didn't prevent them singing 'Happy Birthday' to me on my 21st, even though they had no idea who I was). ENO's effort wasn't quite as bad, but given the bigger budget and the greater sophistication of stage machinery, it should have been silent.

Having all those servants, who are definitely there in the James novella but who benefit the opera by being absent and leaving the claustrophobic action to the six protagonists, diffused something of the horror; and of course, it would have chilled us more to the bone in a smaller theatre. That said, the projection and nuancing both of the soloists and the orchestral players under Garry Walker was at a higher level than in any other performance I've heard.

Rebecca Evans, without the edginess of the original Governess Jennifer Vyvyan, conveyed all the protagonist's impulsiveness and neediness through inflection of the text. Her most melting moments, such as the letter-writing in Act 2 and her desolation at the end, were heart-breaking. Nazan Fikret's Flora, as always much older than James's creation, came across as a big girl on the brink of womanhood, clearly already disturbed and marginalised by the Governess's fixation on sweet little Miles - also a performance of startling maturity from the second of the two boys in the cast, Jacob Moriarty. The ghosts didn't quite have the physical presence of Bondy's pair, but maybe that was part of the point; and Timothy Robinson was emblematic of the production's hard work on detail in the profound plumbing of every word as Britten so magnificently set it. I'd love to see McVicar's vision on film: that could solve the scene-shifting problems in the all-important interludes and allow us the close-ups I didn't get from my seat at the back of the stalls.
Posted by David at 12:08