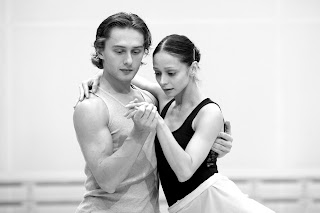 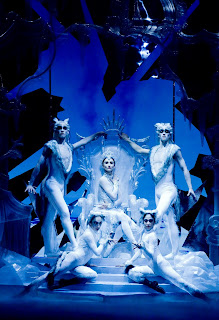 While the Royal Ballet has refurbished and refreshed the classic Kenneth MacMillan Romeo and Juliet, English National Ballet continues to grab headlines with its newish production of The Snow Queen, purportedly to Prokofiev's last and least well-known ballet score, The Stone Flower. Choreographer Michael Corder had long wanted to try his hand at this full-length baggy monster, but was apparently told that no-one knew the story (a tale from the Urals about a perfectionist artisan who seeks the stone flower that will create a malachite vase of matchless beauty, only to sell his soul temporarily to the Mistress of the Copper Mountain until rescued by his true love). Hans Christian Andersen's The Snow Queen provides a more familiar correspondence, as I pointed out in my notes for the Chandos recording of The Stone Flower back in 2003.

Perhaps it was inevitable that a three-act ballet on the subject would have to be as conventional as the original Bolshoi and Kirov productions of The Stone Flower. As you see from the second picture, courtesy of Patrick Baldwin, the Snow Queen (Darya Klimentova) sits on a superkitsch throne flanked by furry dancers who look like refugees from the cast of Cats (in fact they're supposed to be wolves and foxes). She does look splendid, of course, in her 'half kilometre of Swarovski edging...as well as several thousand crystal motives and thousands of individual stones'. Otherwise, the sets and costumes would not be out of place in a Soviet show of the 1970s.

Nicholas Georgiadis's 1960s sets for Romeo and Juliet over at Covent Garden, on the other hand, have been restored to their original glory, and so long as you like plenty of Sienese reds and browns, still look handsome. Within that framework I adored the small but perfectly formed and hyperpoetic lovers of Ivan Putrov and Roberta Marquez (pictured above by Rob Moore in rehearsal). The balcony scene brought tears to the eyes, as it so often does, and if something of the chamber-musical intimacy of the later scenes gets lost on the Covent Garden stage, the denouement was harrowing as ever. Everything about this revival breathed a confidence lacking the last time around, and Boris Gruzin's fluid pacing of the score made it sound better than I've ever heard it at the Garden. What an irresistible introduction to the ballet this still is, and how moving to recall that incredible television documentary in which inner-city kids worked on it for 18 months with the Birmingham Royal Ballet.

The Snow Queen presses all the right classic buttons, but rarely blazes with life, except in the vigorous gypsy divertissement of Act Three. To my untutored eyes, much of the choreography seemed stereotyped: surely an opportunity was missed to make the icy palace people more other-worldly and peculiar? Their dances were very ordinary. As for the score, amazingly well played under Martin West - what a deal of conducting talent is immersed in the regional ballet companies - it can hardly be said to have been 'arranged' by Julian Philips, unless you take 'arrangement' to mean 'positioning'. Wisely, perhaps, since The Stone Flower rarely rises to Prokofiev's greatest lyric heights, he has taken the romantic highspots from War and Peace - in the suite put together by the late Christopher Palmer, who is the only true, uncredited arranger of the evening - and the Summer Night suite drawn from Betrothal in a Monastery.

Elsewhere, the plums - and some of the duffer numbers - of The Stone Flower have been cut and pasted; if there are any new transitions, I didn't notice them. The biggest mistake, I think, is the start. Prokofiev's icily brilliant introduction is the perfect representation both of the Mistress of the Copper Mountain and her Andersen counterpart. We didn't get it: instead, the curtain immediately rose on the Snow Queen and her court, prancing to the polonaise from War and Peace. Thus what Verdi would have called the 'tinta' of the piece was never properly established. Best, perhaps, was the end of the First Act, Kay's absorption into the ice maiden's kingdom played out at length to the scherzo from the Fifth Symphony (originally an idea for Romeo and Juliet). Yosvani Ramos's Kay and Fernanda Oliveira's Gerda charmed; Klimentova had poise, and glittered in her Swarovski diamonds, but didn't seem to me sufficiently supernatural. Ah, the ballet world - how mired in the old-fashioned it is. And even when it tries to be modern, as we saw from Michael Clark's half-cock Stravinsky, it often falls flat.

Still, to see aristocratic dancing at its best is quite something: after listening to my fourteen complete Nutcrackers for Radio 3's Building a Library, on Saturday evening I watched the Royal Ballet show with incredibly slow but powerful conducting from the late, great Svetlanov and marvelled at how they could furnish not two but four wonderful principals. That's the sort of thing that Matthew Bourne's New Adventures (as Adventures in Motion Pictures is now called) can't do, but they know their strengths and their Nutcracker! is as fresh as when it first hit the stage in a double bill (as Tchaikovsky originally devised it) with the opera Yolanta. I'm taking one of my goddaughters to see it on Saturday. As for my library choice, you'll have to wait until 22 December to find out. Don't hold your breath. All I should add is that I love this masterpiece even more than when I started. It's a difficult thing to keep up the inspiration across the span of a two- or three-act ballet. Prokofiev managed it once, in Romeo and Juliet. The Stone Flower, like Britten's Prince of the Pagodas, starts well but then falls back on mere professionalism. Only Tchaikovsky pulled off the trick three times.

Can I just finish on a self-indulgent paean to what makes London on a crisp, clear winter's day so marvellous? After I'd had a fun time recording the Nutcracker script with the excellent Kevin Bee and his team in Broadcasting House, I allowed myself an afternoon off following two weeks of solid work. I had a slow-to-be-served but sociable lunch at the ICA with Jeremy and our Alexander teacher friend Tom Pope, looked round the exhibition of Peter Hujar's often outlandish photographs, cycled off to pick up scores from Westminster Library and then whiled away the hours before The Snow Queen up in Marylebone. I wanted to see the drawings from the Rothschild Collection at the Wallace Collection, which didn't take long - apart from the vivid Bakst Scheherazade design and some Lancrets, it didn't interest me - but I ended up more absorbed by the sword hilts in the oriental armoury, which I had entirely to myself. Then I wandered up and down Marylebone High Street, bought some records in the enormous Oxfam Shop, pottered in Daunt Books and had an omelette in Paul, where I bumped into Peter Maniura, his wife Robin and their daughter. Peter wanted to know if he should televise The Snow Queen, so I'll point him to this report. No doubt the Swarovski costumes will look good in close-up; but I don't anticipate it rivalling the telly hit of the Bourne Nutcracker!, for which Peter was also responsible.
Posted by David at 10:13

Good morning, Mr. Nice
I am an Italian musician. I am an oboist and I'm going to finish the two-year second level academic at the Conservatory of Udine.
I'm working on a thesis on the quintet op. 39 in relation to the ballet trapeze. So far I've found some interesting elements, including the re-orchestration of two lost movement of the ballet by Samuel Becker. On the page of this composer is a link to the page www.prokofiev.org/interviews/nice.html where there should be one of your interview, but the link is not working. So I found your blog and here I found the same link to the interview, but it does not work. How do I find this interview? I would be very interested to read it because I seem to have realized that Trapeze is mentioned.

Waiting for your response,
I thank you for your attention and I greet you cordially

Good to hear from you, Cristina (if I may). It is very frustrating: the Prokofiev.org website was hacked and the website owner, Sugi Sorensen, still hasn't got round to cleaning it up, though he promises he will.

I don't have a copy of that interview but I know the interviewer, Andrew Grossman, does. So I'll ask him to supply a copy.

There is a detailed article by my dear, late, so much lamented friend Noelle Mann on her work on Trapeze in the fourth issue of the Three Oranges journal (November 2002). I hope you can get easy access to this but let me know if you can't.

I wish you well and shall let you know more about the interview when I can. You might also like to get in touch with Sam Becker. It might be easiest to leave your email, if you don't mind, for easier co-ordination.

Finally, I'm an oboist too - and I loved Udine when we visited on route between Trieste and Tarvisio. Che bella citta!

Thank you very much for your time.
is a nice coincidence that you are also an oboist and know Udine!
My email address is cristina.decillia@gmail.com
In the meantime, I look for the article in the Three Oranges journal.
There are many things that I still do not have clear origin of this ballet and I would really like to talk to an expert like you.

If you can send me an email so I also have your e mail adress.
Thanks for everything