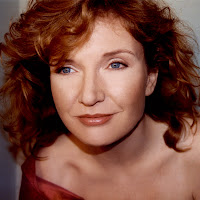 For those of us who never cared much for Schwarzkopf, and even dared to find flaws in Lisa Della Casa, the times have never been better for the enjoyment of that singular phenomenon, the Strauss soprano. There's no one way of going about it, and in recent years I have enjoyed in equal measure the liquid tones of Karita Mattila and Soile Isokoski as well as the fuller, more enveloping sound of Christine Brewer and now the young Anja Harteros, whose Four Last Songs with Fabio Luisi and the Dresden Staatskapelle on Sony is a wonder of communicative strength (even if she sings a little sharp at times in her excitement).

It took me longer to understand the special qualities of Anne Schwanewilms (pictured above by Johanna Peine). Some still find her subtlety a little perplexing: her Ariadne at Covent Garden did not, apparently, come across as vividly to those sitting way back in the amphitheatre as it did to those of us lucky enough to be in the stalls. But her Strauss songs for Hyperion's ambitious series, pioneered by that most sensitive and supportive of pianists Roger Vignoles, proved beyond measure that her uncanny ability to change colour, to float a high line and to choose the unexpected make her second to none in this repertoire.

At the Wigmore Hall with Vignoles last week, she was more unconventional than ever, plunging straight into hushed rapture with 'Traum durch die Dammerung', and ending with the desolation of Mahler's early 'Nicht wiedersehen!' (though of course there were consoling encores in more Strauss - 'Das Rosenband', the long line on 'Elysium' always unforgettable with this singer, and 'Wiegenlied'). The recital had an unsettling core of sadness and madness, and the audience was clearly drawn into the inner world that Schwanewilms so uniquely creates.

I was keenly anticipating her first Berlioz Nuits d'ete with Sir Colin Davis and the London Symphony Orchestra at the Barbican this Wednesday. It was obvious from the first verse of 'Villanelle', however, that there were problems with the French, and a worrying lack of consonants. One of my usually more astute colleagues, Ed Seckerson, said it was one of the most boring performances he'd ever heard. I strongly disagree - again, Schwanewilms draws you into her interior world, which this of all 'cycles' demands (and got, especially with such a small and responsive LSO ensemble). Held rapt by 'Le spectre de la rose', I wept intemperately from the middle of 'Sur les lagunes' onwards. Of course, 'Absence' is one of the two most beautiful songs ever composed (the other has to be Mahler's 'Ich bin der Welt abhanden gekommen', doesn't it?). But again the special tone colour she brought to each refrain created even more magic than usual.

Even so, the rapture had to be modified - which it certainly wasn't when viola-player Tabea Zimmermann took wing with Sir Colin and an LSO on top form for Harold in Italy. Here the vivacious lady is, portrayed by Suschech Bayat: 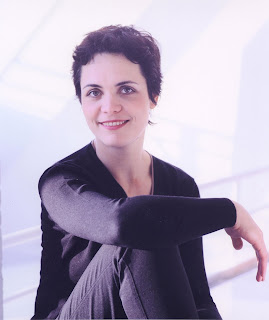 She has to be among today's most dramatic and involving performers, moving with the music and playing with the entry of the protagonist's liveliest tune in the first movement in a way that made me want to laugh out loud for joy. The quiet refrain in the shepherd's piping sequence, too, was mesmerising. And what a great work it is, so full of melody as well as the familiar unconventional instrumentation. To think that at the same time a friend was enjoying what she said was an extraordinary Mahler 3 conducted by Rozhdestvensky over at the Festival Hall. London's musical scene has never been livelier: I keep saying I don't want to overdo it by cramming in too much, but there are too many irresistible and unusual programmes for the taking, and so many great artists to see.
Posted by David at 11:22