Song and dance in Mali

I promised not to tax your patience with reams of holiday snaps and chat. Yet I think I can justify a brief zigzag across the blog-piste if I stick to matters more or less musical.

There are almost as few travellers' destinations in Mali as there are travellers to fill them (though fill them, in peak season, they easily do). So it's only to be expected that rituals have been tailored to order: in Dogon country, where animist traditions cling on partly due to a devil's pact with tourism, they bring out the fake masks - the real ones are, of course, sacred - and do fake dances to order (it was our signal to flee down the falaise once the hitherto quiet village of Begni Mato welcomed a tour group, and the drumming began).

Of course those who travel in twos, threes or fours high-handedly demand a more authentic experience when they can command it; such is the paradox of our privileged wanderings. We found it during the holiday of Tabaski (the west African version of the Muslims' Eid Al-adha festival, the one marking the Abraham and Isaac story), riding out with Sophie to Diabolo, a quiet village near Djenne. Our informal tour of Diabolo was hassle-free and amiable; but it was enlivened enormously by the entertainment taking place near the pond. Dame Ethel Smyth would have been pleased to find a (nearly all) ladies' ensemble... 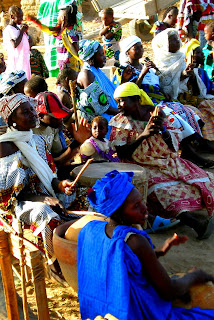 ...accompanying a group we later saw described as 'the Women Dancers of Diabolo'. So they weren't averse to performing their rites before tourists; but this was a spontaneous event to celebrate Tabaski. 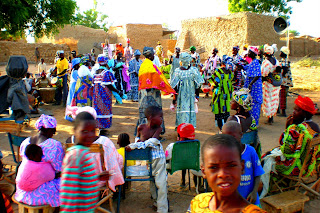 The men of Djenne, in the meantime, honoured Friday prayers at the great mud mosque in all their new just-for-Tabaski finery:


Afterwards, they filed out and stood for five minutes in silent rows to mark a funeral. Sophie thought we were exceptionally fortunate to witness Djenne life at its most formal and colourful. She did, in fact, wheel out an instrumental ensemble at Hotel Djenne Djenno for a large tour party which failed to materialise - for an explanation, see Sophie's recent blog entry. Anyway, the few of us there were lucky enough to enjoy a very spirited balaphone group. I'm fortunate to have heard this big xylophone wielded with supreme mastery by Mamadou Diabate, the leading virtuoso from Burkina Faso, in a very strange meeting with schrammel players at one of Vienna's many heurigen. But Sophie's boys certainly had plenty of panache.

What little I've heard of Malian music is pure sunshine, incarnate in the bluegrass but not at all bluesy guitar of the late, great Ali Farka Toure. His playing nicely encapsulates the apparently easy-going spirit of a delightful people.

I'll leave you with a shot of me at my jolliest, sitting on the roof of our pinasse as we sailed down the majestic Niger, not far from Ali Farka's home village of Niafounke.


You'd never know that I'd just spent one of the worst nights imaginable, buffeted by the windswept waves of Lake Debo in the heart of the Niger inland delta. Sunrise, though, brought a return to the high spirits of the previous day's journey from Timbuktu. And we did make our ultimate destination, Mopti, in a record-breaking two days.
Posted by David at 22:12

how lovely to have you with me, and tonight the balafon orchestra is playing again, I will think of you
XSophie