The question-mark is there because I can’t pretend an overview of all the great events of last year. That’s why, of course, we had a wide-ranging jury for the 2007 BBC Music Magazine Awards, nominations for which are there on the magazine’s website awaiting your votes until 28 February. Hardest-fought categories were Instrumental and Chamber, where some of us only had our way thanks to certain shuntings over to the jury-only awards (yet to be announced, so I’ll keep mum on that).

In two categories I can balance what I’d personally like to see win – Hayroudinoff’s Rachmaninov Etudes-Tableaux and Schwanewilms’s Strauss Lieder disc – with what I think the public may (equally deservedly) choose – Mitsuko Uchida’s magisterial Beethoven Hammerklavier Sonata and the Terezin anthology from Anne-Sofie von Otter and friends. I was sorry not to see any of Julia Fischer’s several concertos discs make it to the Orchestral troika, and must briefly note that candidates for the ‘Opera and Dramatic Oratorio’ category were very thin on the ground – a dearth more than compensated by the DVD offerings decided by the jury (and TBA). Most overrated of the reviewers' five-star choices which we had to sift? Surely the misalliance of a tired-sounding Thomas Quasthoff and Dorothea Roschmann in the least impressive of many Bach cantatas up for consideration, an otherwise revelatory strand in the mountain of listening.

In the meantime the CD containing my Most Played Track of the Year couldn't be considered for the 2007 awards because it had already appeared on another label. That’s Wigmore Hall Live’s (re)issue of the late Lorraine Hunt Lieberson’s 1998 lunchtime recital... 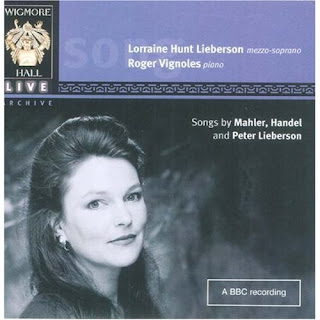 ...and the track in question is her carefully modulated, earth-motherish dream of a Handel aria, ‘As with rosy steps’ from Theodora. Roger Vignoles’s ethereal tread makes sure we don’t miss the orchestral trappings.

The beginning of 2007 saw me eat my words about not sitting through another Handel staging if I could help it. Four hours of his relatively early masterpiece, Agrippina, at English National Opera flew by thanks to the teeming inspiration – many of the arias, of course, found more famous homes in later works – and the witty, resourceful staging of David McVicar, briefly dark and threatening when it needed to be. The cast wasn’t as perfect as Sir Charles Mackerras’s line-up for the revival of the Royal Opera Orlando a few weeks later, but each singer communicated vividly and relished the opportunities McVicar provided for a tour de force or two. The cocktail bar scene (seen here in Clive Barda's production photograph with Christine Rice as Nero and Lucy Crowe as Poppea) was laugh-out-loud funny. 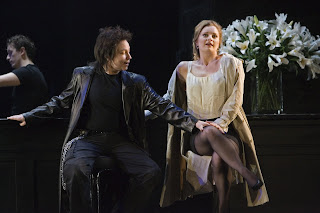 Most unsettling operatic scene of the year would have to be the shadowing of Banquo and Fleance by the assassins in Richard Jones’s Glyndebourne production of Verdi’s Macbeth. Cardboard boxes and smilies have never seemed more sinister. It was musically a top-notch evening too. I also felt – and in this I’m in even more of a minority – that drama and music fused perfectly in the Royal Opera’s much-booed Pelleas et Melisande: to use the pit and the auditorium as the natural world seen and sensed by Debussy’s bewildered protagonists was an inspiration on Stanislas Nordey's part that also allowed perfect co-ordination with Rattle and the orchestra as well as direct communication with the audience.

Stinker of the year? Glass’s Satyagraha: four chords in forty-five minutes for starters – my conventional mind screamed out for modulation – and an overrated cliché-ridden production from Improbable Theatre. All so dead on its feet at ENO after live-wire Americana courtesy of Bernstein, Comden and Green in Jude Kelly’s revival of On the Town – a total work of art that wears its learning lightly.

For me, the most overwhelming theatrical event of 2007 year was the National Theatre of Iceland’s mortuary-bound Peer Gynt, directed with an intensity that veered between the visceral and the visionary by Baltasur Kormakur. Eggert Thor Jonsson's photograph of Bjorn Hlynur Haraldsson’s Peer at the end of his life, visited by a final vision of Solveig (Brynhildur Gudjonsdottir), shows one of many extraordinary stage pictures. 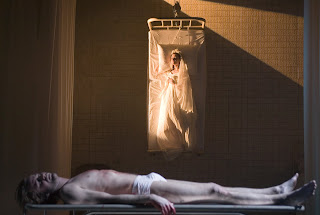 I saw this fast-moving but by no means cut-to-ribbons Ibsen adaptation twice in one week at the Barbican's Pit theatre, and it wrung me out on both occasions. The sudden havens of crucial Grieg – Ase’s lament, Solveig’s song – in the often frightening ‘sound design’ certainly helped to heighten the emotions. And how extraordinary not only that the Icelanders should have learnt it in English for their London appearance, but also that they should have spoken the feisty translation with a clarity and range that you don't often hear at the RSC or the National (though notable exceptions there have been Simon Russell Beale's perfect comic timing in Hytner's sunny - too sunny? - Much Ado about Nothing - and poor Alex Jennings, doing his best to put resonance into the arch piece of fluff that is Coward's Present Laughter).

Finally, and briefly, the concert scene: hard to choose between a Gergiev blockbuster programme that actually worked, again at the Barbican - Stravinsky's Symphonies of Wind Instruments and Rite of Spring bookending Debussy's La Mer and a Prelude a l'apres midi with the most refined of dying falls, and Prokofiev's raucous incantation Seven,they are Seven - and the complete Kodaly Hary Janos music done with gusto by Hungarians under Adam Fischer in Vienna. Kodaly's ideas and orchestration teem with wit and spirit throughout: no excuse for just hearing the Suite (and even that's a rarity in the UK, perhaps because cimbalom players are thin on the ground here?) New works? Unquestionably Widmann's ad absurdam... (see first blog entry) and, on a larger scale, MacMillan's The Sacrifice also featured below, promising big things for his new Passion this Easter.

I wanted to go on to books and films, but I've prated too much already, so that'll have to do.
Posted by David at 20:23