Yes, I know, it’s been three long months since there was any life in this blog, but as spu-rring is here (as represented by my barely budding mulberry, still in exile on the south side of the square, and more colourful seasonal display beneath it)…


…and as the BBC Music Magazine awards were finally announced on Wednesday, let’s pick up where I left off. I didn’t have anything inspiring to say about such much-touted events as Salome – overrated except for Jordan’s fastidious conducting, the Narraboth and the Page (!) – and Gruberova. But on Tuesday I’d say I got my soul back. My loyal student, and intelligent patron of the arts, Gillian Frumkin, drew belatedly to my attention that the live-wire Jerusalem Quartet, whose first violinist Sasha Pavlovsky usually stays with her in London, were helping to launch Steven Isserlis’s Russian chamber music festival at the Wigmore. So I forsook the BBC Symphony Orchestra, being especially keen to hear the Jerusalems on the eve of their BBCMM award (for this:) 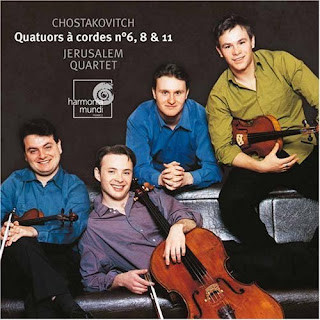 ...and boy, was I delighted. Isserlis, clarinettist of the moment Martin Frost and a very imaginative, effortlessly virtuosic pianist new to me, Kirill Gerstein, kicked off with Glinka’s Trio pathetique – hardly great music, but how they cherished its Donizettian bel canto. But the real melodic heart of the matter came from the Jerusalems, in a performance of Borodin’s Second Quartet much meatier, if less silvery, than the familiar interpretation of the mighty Borodins. I heard things I’d never noticed before: the way the cellist leads the quartet into a magically distant key in the first movement recap, lovely touches from the viola and such a droll mock-serious dialogue before the finale bursts out laughing. ‘Moy lyubimy kvartet’, I told Sasha’s charming father in the interval, and it’s true – only Dvorak’s American Quartet has quite the same spirit of delight.

Sasha and cellist Kiril Zlotnikov bowed out to the Amazonian Baiba Skride and Isserlis for the Taneyev Piano Quintet. What a monster, at least in the gusty outer movements, and how convincingly they all rode the storms. I actually preferred the brighter worlds of the second and slow movements – the latter is Taneyev in most leonine mode, with a constantly descending passacaglia figure of striking dignity: utterly memorable. I wanted to hear it again immediately. And listening to the first and third quartets in the afternoon for the Music Mag, I was struck again by how full of feeling Taneyev is in chamber mode – a far cry from the misleading image of the dry-as-dust contrapuntalist, and from interminable works like the cantata At the Reading of a Psalm, after a performance of which by Pletnev (who for some reason loves it), Andrew Stewart and I rudely guffawed in the face of a colleague's ‘Hats off, gentlemen, a masterpiece!’

Andrew, I was glad to see, was one of the 150 or so guests on board the Silver Sturgeon for the third BBCMM awards. Other private faces in public places, Rob Cowan and Anthony Burton, joined me for a blissful ten minutes in the spring sunshine on the upper deck (cycling along the Victoria Embankment, I found myself humming the opening of Janacek’s Osud, which of course is about the guests at the spa resort basking in the sun). Only at the end did I catch up with two of my fellow jurists, Christopher Dingle and the delightful Berta Joncus. Chris said, and I agree, that if we’re asked to do it again in a few years’ time, we should insist on all the same heads getting together, so well did we get on. Alas, although the Jerusalems should have been there to receive their prize, squeezing in a short appearance between a six hour rehearsal for Tchaikovsky’s Souvenir de Florence (more of which anon), their taxi failed to meet the SS as it made a special mooring half way through the event. Anyway, I’m delighted they won the chamber award for their vitally re-imagined Shostakovich quartets, though I can now say that their appearance among the threesome was only thanks to the passionate pleading, bullying even, of two of us on the jury that they should be given a chance and a Kagel disc shunted to the Premiere Recording category (same thing happened with Rustem Hayroudinoff and the Rachmaninov Etudes-Tableaux, which made it thanks to the sidewards shift of David Fray’s dazzling Bach/Boulez programme).

As I guessed – and even the jury wasn’t allowed to know until the last minute – Mitsuko’s Beethoven Hammerklavier ran away with Disc of the Year. She made the most charming and vivacious speeches imaginable; filmed, alas, but you could feel her presence and I bet there wasn’t a single person present who didn’t fall in love with her on the spot. She talked amusingly about being built for Schubert and Mozart, but not Beethoven, and told us about her three pianos, one of whom was a real diva. Here she is with her award, as photographed by Mark Harrison for the magazine: 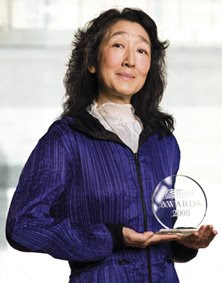 I was also delighted to see Maxim Vengerov there at the lunch. His equally charismatic personality triumphed over that dubious Tango Concerto in the DVD Documentary category (best of a not especially wonderful bunch). No stars graced my table, and I was in the faintly embarrassing position of being with the EMI folk when frankly I wouldn’t have chosen Martha Argerich’s Shostakovich Piano Concerto No. 1 as the best orchestral disc (not naughty enough for me; though the Piano Quintet is a different matter – chamber material, though). I hope I made amends by telling David Groves in all sincerity that I’d rooted for Pappano’s Respighi disc. Of the other special guests, I only got to speak to Robert Carsen, there to receive the best DVD Performance award for his spare but harrowing and ultimately transfigurative production of Poulenc’s Dialogues des Carmelites, about which we were all unanimous. Even in the minute or so they screened of that most moving of all final operatic scenes, tears came to my eyes. As they did to Carsen’s in his acceptance speech; his mother had died three days before, and she specially loved the Carmelites.

Anyway, the Jerusalems’ day spent on Souvenir de Florence with Joshua Bell and Steven Isserlis turned out to be more than worth it. As an enthusiastic American gentleman who accosted me in the Wigmore foyer afterwards put it, ‘that was beyond belief, wasn’t it?’ And it was. It’s such a tough piece, and I’d never appreciated quite how exhausting the Finnish-sounding third movement can be for the listener as well as the performers. It was good, too, to hear Jerusalem viola-player Amichai Grosz equal in the beauty of his solos to soaring Bell and subtle Isserlis. Another ingenious programme began with Arensky’s Second Quartet (for violin, viola and two cellos) in memory of Tchaikovsky: a personal and at times meltingly beautiful work. I hadn’t realised that the second movement formed the basis of his best known piece, the Variations on a Theme of Tchaikovsky for string orchestra. Rubinstein’s First Cello Sonata sounded commonplace by comparison – the main theme of the finale starts out as if it wouldn’t be out of place in a G&S patter song – but again Kirill Gerstein made light of a heavyweight piano part (you could tell that Rubinstein, like Taneyev, was a first-rate pianist). Pity I can’t hear the third concert in the series on Saturday – Rosenkavalier at the South Bank beckons – but I wouldn’t miss Bell, Isserlis and Mustonen in the Shostakovich Second Piano Trio on Monday for anything.
Posted by David at 10:37