Welcome to all the pleasures...

…which in my case meant a rather excessive Monday, the day before we left for Cyprus, embarking on the first of six two-hour sessions on my best-beloved Rosenkavalier with the City Lit students, followed by a hasty cycle over to the English-Speaking Union where I was addressing Glyndebourne regulars on Yevgeny Onegin (faced with the mock-rococo of this unfamiliar Mayfair establishment, I felt I was still in the world of 18th century Vienna). The Onegin event was to have been a conversation with Vladimir Jurowski, such knowledgeable and enthusiastic company for last year’s Betrothal in a Monastery study day as well as a Tate round table, but he’d double booked; we then expected the conductor of eight performances, Kirill Karabits, but on Friday he heard he was wanted down there at rehearsals until 6pm.

So I went it alone, but not too fearfully as I know and love the subject well. I think I covered most bases, sticking by and large to Tatyana in Act 1 though pointing out how her most heartfelt theme connects with others for the Nurse, Onegin, Lensky and finally the anthem for doomed love in the final scene. The examples I’d put on to CD all worked fine, but as a bonus I’d asked for ten minutes of DVD screening to show Yelena Prokina, Tatyana incarnate, in the Glyndebourne production on its first appearance. Somehow the sound was sabotaged, barely audible through interference, so the audience had to surmise the truthfulness of Prokina’s intense performance through visuals alone. Here she is in Graham Vick's Glyndebourne staging, as photographed by Mike Hoban:


A very friendly punter suggested I joined him and his partner for a drink while the sound engineer faced the firing squad (as he put it) and I found myself embroiled in the Boris Johnson fan club, who were not above taking pot shots at the Kinnocks and the EU (which I had to defend as best I could). Nice people, all the same, which shows one doesn't have to share political opinions to get along. 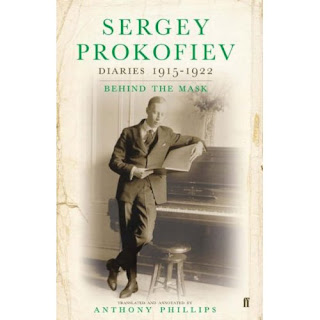 I’d hitherto only skimmed the Russian text with my plodding grasp of the language. What will need to be revised in the biography? News on all his women, for a start, between Nina Meschcherskaya and Lina: the casual lays as well as the romantic liaison with Stella Adler and more details on ‘Frou-Frou’ Baranovskaya than I’d had access to when I wrote the book. The American stretch was always the least well documented, but it springs splendidly to life, especially in a flavoursome description of a Californian New Year’s Eve party. And the evocation of the Ballets Russes, the rehearsals and premiere of the Chicago Love for Three Oranges and a séance conducted by the barmy but brilliant Nina Koshetz, a truly great singer, are written up with first-class literary flair. These are diaries for anyone interested in the upheavals of the early 20th century, and certainly not just for music-lovers. Phillips’ annotations are a mine of useful and arcane information, and how splendid that there have been no abridgements. More details will have to wait until my review appears in the July BBC Music Magazine. In the meantime, roll on, Vol. 3.
Posted by David at 16:03