Show me the corpse

Apparently one of the unspeakables on Newsnight Review, that slough of anti-musical (and sometimes anti-everything) philistinism, said of The Minotaur something along the lines of 'if you think classical music is dead, go to Covent Garden and view the corpse'. Well, I can't speak for Birtwistle until I've seen the show, which I'm due to do tomorrow, though some reports suggest these might well be the death-throes of the 1960s avant-garde. But I'd respond to this lofty pundit by saying 'if you think classical music is dead, go hear the Britten Sinfonia and see a healthy body bursting with vitality'.

This band seems to have its finger on the pulse without resorting to any trendy gimmicks. The audience is a bigger mix than any to be seen over at the Festival Hall concerts, with plenty of young people and quite a few kids, and as the lights dim and the players come on stage, they're received with all the ecstasy usually reserved for a cult group. The BS programmes are inventive in the extreme, though not always esoteric: you could take from Wednesday's Queen Elizabeth Hall programme the excerpts from Don Giovanni and The Rake's Progress as well as the more outlandish numbers from the complete Pulcinella and insert them into one of those quasi-club evenings which have sprung up in Berlin and are now being tried out at the RFH. One of the nice girls who work for the Sinfonia told me that they will be participating in just such an event this October, playing Tchaikovsky which will then be 'remixed' by a DJ (!)

Yet this was a programme to be taken in the round. They started with Britten's early, and apart from its finale not terribly memorable, Sinfonietta and Stravinsky's very late and simple arrangement of Bach's Prelude and Fugue in C sharp minor. The Fugue, scored for three clarinets and two bassoons, was an especially phantasmagorical event in the hands of the BS's world-class wind department. In that respect, the group is like a mini version of Abbado's super-band Lucerne Festival Orchestra, and it boasts perhaps the finest oboist in the world (at least I think so, because as a player I'd always aspire to his beefy, full-blooded sound), Nicholas Daniel: 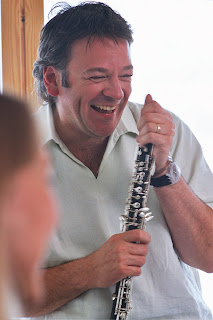 He shone so much in the Theme and Variations of Pulcinella that even friends who didn't know him as one of our greatest oboe soloists - second only, surely, to his teacher Maurice Bourgue - were startled by his brilliance. But this was an evening of great solos from this army of generals. The vocal trio included Roddy Williams, who gave the most relaxed and focused performance of Don Giovanni's Champagne Aria I've ever heard, and Toby Spence, again unusually virile and full-toned (and phrase- and breath-perfect) for Don Ottavio's 'Il mio tesoro'. The soprano, Rachel Nicholls, was a last-minute replacement for the sublime Carolyn Sampson, whom I've been longing to hear live since listening to her Bach Cantatas on CD. Nicholls is intensely musical, but in this company her voice seemed a shade lacking in individuality, and the cruel top C of Anne Trulove's aria was not her strongest asset. What a nice idea, though, that they all came back for Pulcinella, and seemed to enjoy its purely orchestral passages so much (how could they not?). Masaaki Suzuki was in his element here, but wanted just a little human sympathy in his early-music view of Mozart. Still, it was a deliriously happy evening.

I've been taking the Morley/BBCSO students through the Vaughan Williams symphonies (4 and 6 especially). How easy it is to overlook their unusual shape and originality of expression - even the Pastoral Symphony, which I haven't heard in concert for many years now, took me by surprise in its more tortured passages. Here's real individuality, even if one sometimes tires of the over-used folksy intervals.
Posted by David at 08:56