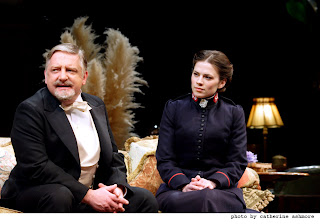 On this especially horrible day, when the Burmese military regime lets thousands of cyclone victims die, as tanks rumble across Moscow's Red Square for the first time in years and Hezbollah decimates a once-peaceful Beirut, the serious issues raised by Shaw's Major Barbara seem stronger than ever. I went to see Nicholas Hytner's National Theatre production on Tuesday, and was stunned as so often by GBS's complex dialectics lightly presented as well as by the sheer warmth and humour of so much of the text. And all this in 1905 (the year The Merry Widow was also premiered)! The show boasted two superb tours de force from Simon Russell Beale, less like himself than in any other performance of his I've seen as the Machiavellian 'Prince of Darkness' arms dealer Andrew Undershaft, and Clare Higgins, newly graduated to grande dame status and a mistress of comic timing as his estranged wife Lady Britomart. Alongside her assured delivery, the ingenue playing Barbara, Hayley Atwell, came across as rather weak of voice, but she wasn't bad either. Otherwise, the ensemble was flawless. Here's Paul Ready as Adolphus 'Dolly' Cusins, wondering if he still be able to 'wage war on war' in Undershaft's employ (photo, as above, by Catherine Ashmore): 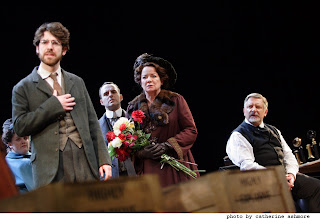 By pure serendipity, the morning of the day we were due to visit the National was taken up with reviewing Britten's Owen Wingrave, in which the protagonist of the James story on which the opera is based also wages war on war. It's a relatively one-dimensional paean to pacifism, but the music is so much more remarkable than I thought when I saw it in action at Glyndebourne some years ago. I'll save any observations about the new recording for the BBCMM review, but this is the chance to underline how inventive Britten is in his late spare style, from the arresting gamelan-style military parade at the beginning to the haunting chords of time suspended towards the end. There are embarrassing bits, like the easily-parodied 'scruples' ensemble, and Myfanwy Piper's libretto lacks the irony of James's marvellous story. Perhaps, too, it should be in one act rather than two (James adapted it as a one-acter for the stage called The Saloon). Yet once more it's clear how many more striking ideas catch the ear than at any point in The Minotaur. Time, though, to lay that poor beast to rest.

Further war thoughts, finally, were soberly provoked by our Morley look at Vaughan Williams' Sixth Symphony. What a superbly-constructed masterpiece, chilling to the bone and equal to Shostakovich 8 and Nielsen 5 (and I never thought I'd say that). Sir Andrew Davis performs it tonight in an amazing programme with the BBC Symphony Orchestra: can't wait, though emotionally it might be too much. Incidentally, we were all amused to see that the forthcoming RPO concert in which the great Tod Handley conducts the nasty, aggressive and totally bracing Fourth Symphony is titled 'Green and pleasant land'. We fear the cow-pat lovers, pastoralists and UKIP supporters will be in for a bit of a shock.
Posted by David at 14:00