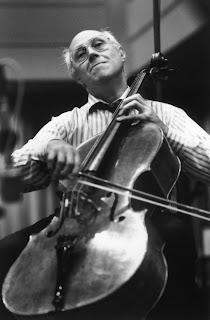 A little late, this, I'm afraid, since the picture by Suzy Maeder I'd been waiting for last week was lost in cyberspace, but it's still only just after a year since the greatest performer I've ever met, Mstislav Rostropovich, shuffled off this mortal coil. We were reminded of the fact by Natalie Clein, in a Cadogan Hall recital dedicated to Slava and intelligently planned with his inspiration to several great composers in mind (incidentally, her pianist, Kathy Stott, rather eclipsed the inward-looking impression left by the cellist).

So I recall how at the end of last April, after a hyperactive day rushing off to Bush and Broadcasting Houses to pay tribute, I dissolved in tears at every recording of Slava's I listened to (and I dug out a great deal then, believe me). Of course it's hard to banish from pride of place his close friendship with the men he told me in interview were his 'three gods above all the rest', Britten, Prokofiev and Shostakovich. But I shall also never forget his Strauss Don Quixote, his surprisingly sensitive piano-playing for wife Galina Vishnevskaya, and the way he gradually got the London Symphony Orchestra to understand him as a conductor in spite of his somewhat questionable stick technique. The Shostakovich Eighth Symphony at the Barbican, which must have been one of his last performances with them, if not the last, is branded on my memory as the deepest, most layered interpretation of a symphonic work I've ever heard (and thankfully preserved on the LSO label, though it's not quite the same experience, of course).

No more tears now: his energy and force for the good, in world affairs as well as in music, remain vitally with us - though what on earth would he make of the new Russia?
Posted by David at 15:56