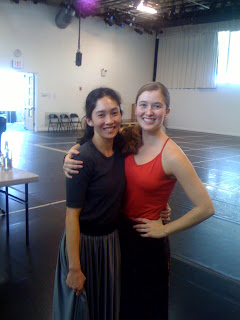 Here are two winsome Juliets, Maile Okamura and Rita Donahue, about to play a crucial role in Mark Morris’s forthcoming Prokofiev magnum opus. Last Saturday we learnt more about the radically different original version of the complete Romeo and Juliet, with its final scene of lovers reconciled to life which Morris is choreographing probably even as I write, from musicologist and fellow Prokofievian Prof. Simon Morrison. He took the above photograph and has pieced together the composer's first thoughts from manuscripts in Moscow archives. Simon's talk was the centrepiece of a Goldsmiths’ Prokofiev Study Day, fluently put together (with Christina Guillaumier) and personably steered by Noelle Mann’s successor at the Prokofiev Archive, Fiona McKnight.

Simon not only clarified the musical and dramatic nature of the original ‘happy end’ on which Prokofiev, not the Soviet state, had insisted in 1935 – Friar Laurence intervenes to rouse Juliet before Romeo can kill himself, the crowd rejoices, the lovers are left alone to dance – but also played us portions of the score as recorded by the repetiteur of Morris’s rehearsals. As well as a much extended final scene, where it is the rejoicing that rather oddly occasions the music we know as the scherzo of the Fifth Symphony, not a scene for Juliet’s nurse as I had originally believed, we heard a completely new ‘Dance of Three Moors’, part of an over-extended divertissement in front of the drugged Juliet in Act 3 (the other dances, for pirates and Antilles girls, became respectively the 'Dance with Mandolins' in Act 2, a romp which several of my godchildren adore, and the ‘Dance of the Girls with Lilies’). The weakest part of the score as we currently know it, those multiple reprises of the crowd dances in Act 2, were inserted at Lavrovsky’s insistence for the 1940 Kirov production. Juliet’s variation from the final sequence became an extra number at the Capulet Ball, and Romeo’s dance was subsequently stitched – unconvincingly, we agreed – into the so-called Balcony Scene. Morris will, Simon assures us, treat the final resurrection as a love-dance outside the frame of the story; and since it is the same rather sad music used for Juliet’s death in the revision, it merits sensitive handling. I can hardly wait for the Barbican performances in November; sadly, its Bard Festival premiere doesn't coincide with the Prokofiev events I’m attending as speaker in August.

The rest of the Goldsmiths day was taken up with papers from home and visiting academics. We heard a masterly 20-minute summary of the musical structure of The Fiery Angel from Stefan van Puymbroeck, a lively talk about Prokofiev’s relationship with Glaswegian new music champion Erik Chisholm (I had surveyed their correspondence in the Archive for the biography) from Fiona McKnight and new light on the making of the Lieutenant Kije film from the absent Kevin Bartig.

A perfect conclusion was the jeu d'esprit from forthright Serb Ivana Medic on Prokofiev’s many ‘appearances’ in rock and pop music. She is clearly an Emerson, Lake and Palmer fan, but hates Sting’s use of the Romance from Kije – ‘it makes me want to puke’. Afterwards, I asked Ivana where she acquired her idiomatic English, since she’s only been in Manchester for two years. It’s a curious story. She and her identical twin sister were so anxious to exclude a pestiferous younger sibling that they spoke English to each other as children in Serbia. The troubling question of what happened to the outcast one was happily resolved: such was her determination not to be left out that she became (if my memory serves me right) a lecturer in English.

After six hours, we were ready to drop, as you might be now after a description of such length (but also, I think, of great importance – you read the R&J stuff here first). But after a cooling interlude under the trees around the Goldsmiths field with Simon, Stefan and Daniel Jaffe, we marched back to attend a reception for Anthony Phillips and his new translation of the Prokofiev Diaries Vol. 2 (see below). Anthony is a real djentlman (as Prokofiev himself might say in Russian) and flattered me enormously by saying he enjoys the quirkiness of this blog. The gathering was more than just jawing: that not-so-old man with a beard Rex Lawson and his fellow-pianola-ist Denis Hall demonstrated Prokofiev’s Duo-Art (mechanical reproducing piano) recordings, and Sergey Sergeyevich lived again. I resolved to learn the first of the Myaskovsky Prichudy, which were the only rolls I hadn’t heard, and we all felt SSP was there in the room with the piano transcription of the Three Oranges March.

Now, I have every confidence in the super-poetic Morris’s ability to do something memorable with Romeo and Juliet. But I’d been a little more doubtful about what would result from choreographer Kim Brandstrup’s very vaguely Dostoyevskyan take on Prokofiev's music for the abandoned film of Pushkin's Pikovaya Dama (Queen of Spades) pieced together and (oh dear) expanded by Michael Berkeley, Rushes: Fragments of a Lost Story. I once met Brandstrup at lunch and proceeded to tell him how I found ballet couldn’t really develop an emotional narrative. I used as my example, foolishly as it turned out, a choreography of Othello, vigorously executed by Irek Mukhamedov, in which I said I felt that the Moor’s jealousy didn’t really rise to a peak. ‘That was my ballet’ came the answer.


Rushes tells some hazy tale about a tortured young man torn between a perverse woman in a red dress and a more homely lady in grey (shades of Lifar’s hasty scenario for On the Dnieper). There wasn’t enough real dance, and the movements were unoriginal (though the red lady was dragged around the stage rather effectively). Berkeley followed Prokofiev’s indications for scoring, but then in the ‘original’ bits made some (deliberately?) ungainly counterpoint, and ruined the spare music for Hermann and Lisa which reappears in the Fifth Symphony by extending it – on Brandstrup’s command, no doubt, to suit an interminable Pas de deux – with the symphony’s scoring. To end with a recently-unearthed, and clearly of-the-sameish period, but relatively undistinguished piano piece, Dumka, was a mistake (Brandstrup's idea, not Berkeley's).

The triple bill didn’t do this murky centrepiece much good, either. Just as in Friday’s concert, where a great masterpiece, Vaughan Williams’s Sixth, closed the first half, only to be followed by a workmanlike Royal Philharmonic Society commission, Dominic Muldowney’s Tsunami, so nothing was going to match the ethereal poetry of Balanchine’s choreography to Tchaikovsky’s Serenade for Strings. How effective the ladies in their blue-and-white dresses looked against a simple blue cyclorama...


...and what an inspired idea to place the Elegie, heart and soul of Tchaikovsky’s score, last, as a much more successful love-triangle than Brandstrup's. Here are Marianela Nunez, Rupert Pennefather and a barely-visible Mara Galeazzi in the second of Bill Cooper's production photographs:


The Ashton-originated Homage to the Queen made a flamboyant finale, with noisy but characteristic music by Malcolm Arnold, yet how, as so often in ballet, one thought, ‘not another variation, please! No more Pas de deux!’

Even so, what a line-up of the Royal Ballet’s best – in addition to Cojocaru and Acosta, we had Benjamin, Kobborg, Rojo, Bonelli, Lamb, Nunez… Neither the ethereal Romanian nor her consort, Kobborg, shone quite as brilliantly as they had the previous week in a gala for her homeland’s Hospices of Hope. Galas are usually disappointing – again, a string of variations and pas de deux in a law of diminishing returns – but this was brilliantly planned (and only an hour and a half in toto before we rushed off to a charity banquet). These wonderful images of both stars in action at the Southbank's Queen Elizabeth Hall were taken by Ryoichi Hirano: 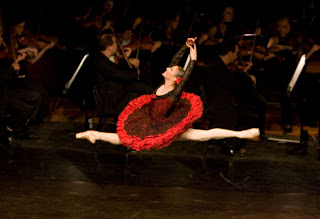 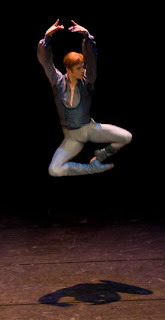 First came Cojocaru, Kobborg and a lone pianist in Robbins’ exquisite and gently playful Other Dances, to Chopin Mazurkas. There was pure but well-executed choreographic conservatism in the Pas de Deux from The Flames of Paris (Yuhui Choe and Marian Walter). I’d been wanting to hear Asafiev’s score, or part of it, since I found out that Prokofiev researched French revolutionary tunes for him; but both the orchestration and the ideas are threadbare. This would sound bad in a ballet score of the 1860s, let alone the early 1930s.

Kobborg danced an interesting choreography by Tim Rushton to Debussy’s Prelude a l’apres midi; Kojocaru premiered Brandstrup’s interpretation of Schumann’s Bird as Prophet. The moment in the evening when my eyes pricked – and they don’t very often in ballet – was for the transcendental demeanour of Roberta Marquez (a perfect Juliet last year) and Daniel Ulbricht in the Coppelia Pas de deux - though I must say that even these two lost my attention for a minute or two in favour of the Manning Camerata’s viola soloist in one of Delibes’s purest inspirations. The grand finale was a riot: ALL the previous dancers plus a few more joining in the Don Quixote Pas de deux/divertissement. A triumph, and Cojocaru seems like such a genuine and delightful person. I liked the elegant Canadian-based, Romanian-born presenter, Princess Marina Sturdza, too; she managed to talk interestingly, and interestedly, to just about everyone at the dinner afterwards. Well done to the Romanian Cultural Institute for backing such a well-orchestrated show.
Posted by David at 11:05