A more than competent beast 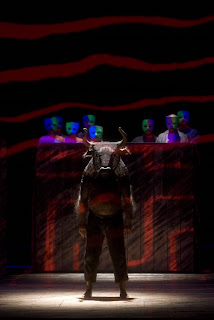 Our man from the Garrick had the temerity to approach Hans Werner Henze, in the audience for the last performance of Birtwistle’s The Minotaur (pictured above by Bill Cooper for the Royal Opera), and ask him what he thought. Very competent, came the reply, and (which was more like a ‘but’) extremely well performed. I’d say it was a little more than competent, but the extraordinary level of the performance was never in doubt for a moment: Sir Harry could not have done better by the staging, the conducting or the singers.

My problem with the music is that, while it’s shaped with plenty of instinct for dramatic contrast, and interestingly – if often thickly – orchestrated, including haunting roles for cimbalom and saxophone, no ideas leap out at you, either from the pit or in the vocal lines, and stick in the memory; and I’m not necessarily talking about tunes, just phrases of striking individuality. The Birtwistle sound world is as mired as it ever was in the thick paste of the 1960s avant garde. So it often becomes incidental, a mere prop of music theatre. There are some virtuoso fast, violent passages – Ariadne’s narrative of her half-brother’s birth, or the slaughter of the innocents – but even here you are reminded that the model without which none of this would have been possible, Stravinsky’s Rite of Spring, boasts melodies as well as rhythms.

Certainly it’s a compelling story, the stuff of nightmares. Harsent, for all the occasional banalities of his libretto, makes us feel immediately for the man-beast locked away and pre-destined to do what he does, and there could be no more persuasive advocate of his torment than John Tomlinson, still in magnificent voice. Is this so very far from the world of the Austrian horror which has hit the news? 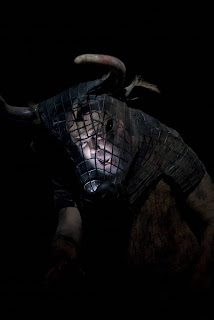 No-one is loveable. Ariadne and Theseus unite through need and convenience. Christine Rice is utterly compelling to look at as well as to hear, the very image of an archaic Kore (this production photograph is also by Bill Cooper): 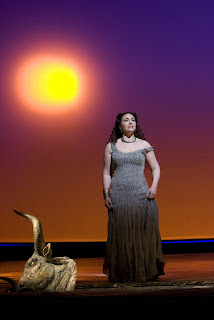 It’s probably thanks to Pappano, and the fact that director Stephen Langridge keeps most of the singers firmly downstage, that you hear every word from her and Johan Reuter. The harpy-like Keres, ripping the hearts out of the newly-dead, were perhaps a step too far - their second manifestation at the end of Act 1 made me want to laugh – but they are splendidly led by Amanda Echalaz (not singing all the right notes, I’m told, but doing so with utter conviction). There were some promising voices among the Innocents, and the orchestral playing was confident and powerful without drowning out the singers. So Pappano now adds a tough new work to a versatile list in which he has already proven his supremacy - Mozart, Verdi, Puccini, Shostakovich and Britten (and his Wagner is getting there, I’m told).

After the pagan ritual of Saturday night, the rest of the Bank Holiday weekend was holier. For the first time I joined the splendid choir that meets once a month for festival evensong at the church around the corner, St Andrew’s Fulham Fields. Father Martin Eastwood, whom I remember from his wilder Edinburgh days, is a dynamic force for all sorts of activities. There’s even to be a music festival over the weekend of 20-22 June including a premiere by a young composer called Jonathan Coffer (I felt for Humphrey Clucas, sharing that evensong, whose biography tells us that ‘his best-known work is still probably his earlier set of Preces and Responses, written as an undergraduate in 1962’). This Sunday’s evensong included the robust Walmisley in D minor and Finzi’s ‘God is gone up’ (for Ascensiontide), which I used to love when we sang it at All Saints’ Banstead. Foolishly, I’d opted to sing tenor rather than bass, and the Finzi has some treacherous full-pelt high notes, not helped by the fact that the organ is a semitone sharp. How juicy, though, is the richly-harmonised central sequence about 'Heaven's sparkling courtiers' - enravishing indeed. Since I wrote this up, I discovered that we'd been snapped; this picture by Ryszard Rybicki was on the St Andrew's website, and shows the altar in all its Victorian excess as well as us (I'm very far back on the right):


Afterwards the congregation and choir, which includes a few visiting professionals, gathered for sausages and wine at the extremely hospitable Eastwoods'.

Bank Holiday Monday was perfect in its way: another holy friend, Andrew Hammond, took us to Cambridge to meet one of my heroines, the author of the most striking libretto since Rosenkavalier and Rake’s Progress, Nixon in China. Alice Goodman is now Chaplain of Trinity College, and she sports a splendidly feminine clerical outfit. It wouldn’t be fair to reproduce what was said over a private lunch about Nixon, Klinghoffer and Doctor Atomic (on which she worked for a year before parting company with Adams and Sellars over the presentation of Oppenheimer as a Jewish Faust). I will say that she was a delightful, warm and enthusiastic companion around the Victorian extravaganza of All Saints’ and the loveable Jesus College - though I fear I shall be remembered by her as the Man Who Stepped on Jesus’ Lawn. Here she is with Fr. Andrew in the courtyard of his theological college, Westcott. The scent of wisteria is everywhere in Cambridge at this time of year: 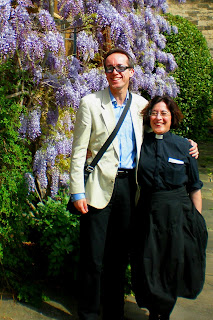 After we parted with the Chaplain, Andrew took us around Clare, his alma mater, and Kings, which I haven’t seen for years: is the Chapel the most opulent and beautiful building in the world, both inside and out? I think so. The photo is a conventional one, but I couldn't resist it: 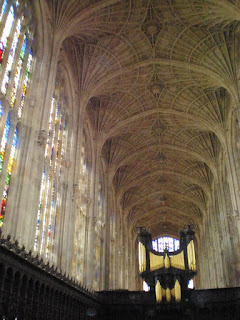