An audience with Sir Harry

Last-minute flurries by our man at the Garrick Club last week brought one of its most distinguished members, Sir Harrison Birtwistle, to talk and to table just before the premiere of The Minotaur. Here he is posing in front of Tim Shaw's minotaur sculpture outside the Royal Opera House, photo courtesy of Robbie Jack and the Royal Opera: 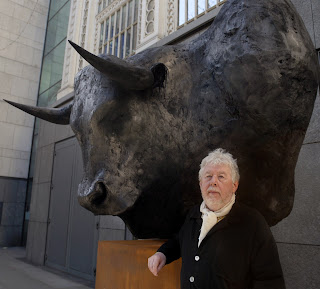 The Garrick’s formal event was a thoughtful, slightly sombre occasion, expertly and sympathetically chaired by Tom Service, who knows what he’s talking about and is especially good at filling in the audience on details the speakers might have taken for granted (who’s Pasiphae, for example). Much of the talk was about Lancashire vowels, enlivened by a question from club member Graham Clark, and about Sir Harry's northern neighbour and spiritual brother Sir John Tom (they were even born in the same nursing home). David Harsent, the poet-librettist sharing the platform, told us how Sir Harry had asked him to ‘go darker’ for certain lines of Ariadne, ‘which with Harry means very dark indeed’. My feelings on Birtwistle operas have been divided: bafflement remains over Gawain, which I duly experienced twice but bits of which I only enjoyed once the voices had been liberated from their labyrinth and replaced by instruments in the orchestral piece Gawain’s Journey. But I was drawn into the strange world of The Last Supper, from which I emerged reeling (yes, I know the libretto’s awkward, but the music overpowers it). I suspect my reaction when I go to see The Minotaur in May – pre-empting the chance of a second performance – will be much the same as Rupert Christiansen’s in the Telegraph, who found it 'enthralling, hypnotising - and unloveable'. Still, best to go with an open mind.

Our host lured the Birtwistles to a Garrick supper afterwards. I sat on the left hand of the master, and learnt that he doesn’t allow too many other influences to clog up his singular vision. Said host told him I’d written a book on Prokofiev. ‘Don’t care much for Prokofiev. When you’ve got Musorgsky and Stravinsky, what’s the point?’ Though he did like some of the piano figuration in what he claimed was the Fourth Piano Concerto. ‘Oh, the one for left hand?’ ‘No. not left hand’. So we didn’t find out which one he meant. He admits to his operatic pantheon Pelleas, Boris and Janacek. Ades’s The Tempest and Adams’s Nixon in China he’d never heard a note of – so I had to protest when he tarred the latter with the minimalist brush. He remained very good humoured when a fellow guest quizzed him along the lines of ‘why don’t you write tunes that the man in the street can sing?’ – the reply, with a twinkle, was something along the lines of ‘why on earth should I?’ Anyway, it was an easy-going occasion, not at all daunting. And I was glad knowledgeable and enthusiastic Tom was able to join us, too.

Friends Anneli Halonen and Riikka Hakola, Finland's leading Traviata (her website is www.riikkahakola.net), made quite a day of it on Saturday, going to the final rehearsal of The Minotaur in the morning, which they found scary in the extreme, before joining us for Zurich Opera’s concert Rosenkavalier at the Royal Festival Hall. Persian attar of roses, which has lasted us well since we brought it back from Kashan in Iran (city of rose-oil and dyers, too - how Strauss and Hofmannsthal would have loved it), was made available to everyone we met. Welser-Most drew silky pianissimos from his orchestra, but remained as ever a bit short on temperament and breadth. Still our dear friend and mother of cherished goddaughters Lottie, over with the chorus for a handful of lines, told us he was in tears at the end. Star of the evening was veteran Alfred Muff as a relaxed, easy-going Ochs, so assured. Stemme’s Marschallin was commanding but had too much vibrato for the golden opening of the Trio, and it didn’t help to have the singers on a platform behind the orchestra. Still, what a joy to hear this inexhaustible score out in the open, as it were.
Posted by David at 10:37