I say baton, he says toothpick

Having expected a polar-opposite experience between Gergiev's Mahler 9 at the Barbican the week before last and Haitink's Strauss on Sunday - both with the London Symphony Orchestra - I hung fire exploding about the 'mangy maestro' with the toothpick, as our uneven Ossetian has been so rudely dubbed (though he might equally well, on a good night, be called a charismatic magician of creative gestures).

Well, the near-conclusion of Gergiev's Mahler cycle was infuriating. I've missed all too many either through illness in the early part of the year or through disinclination to hear another 2 or 3 after several amazing live performances from other sources. What changed my mind about making the effort to catch the Ninth was this radical reinterpretation of the First on the LSO Live label: 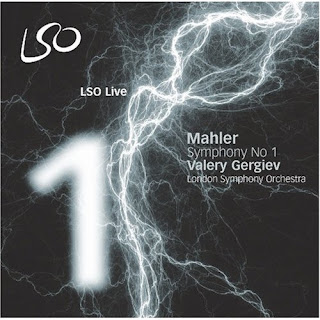 I won't repeat myself about that - you'll soon be able to read the review in the Proms issue of the BBC Music Magazine - but so alive was it that I thought I'd be mad to miss the last Barbican concert in the series (the Eighth in St Paul's is not an option, given the dire acoustics for such a work). The June concert started with the Adagio from the Tenth, for which I'd written the note, and it was both appropriately beautiful from the strings and ear-splittingly frightening come the big dissonance at the climax. But the Ninth was simply horrible: over-urgent, superficial, played extremely well but without much feeling for what lies beneath. You can't wing a work like this on little preparation and the inspiration of the moment. My heart still remains with Belohlavek and the BBC Symphony Orchestra at the start of their cycle, which has been much more sensibly paced (one symphony per season). Gergiev is inspirational at his best, but he needs time to think and breathe. I suppose we should be reassured, at least, by the fact that his thoughts did not seem to be much on the hereafter.

And yes, the contrast with Haitink could not have been greater: effortless music-making in Mozart's Symphony No. 25, de luxe and even profound lining for the ever-poised and long-breathed Dame Felicity Lott in Strauss songs. But as Heldenleben winged its noisy way, I felt I could have done with a bit of Gergiev panache; if not taken to extremes, the more aggressive parts of this mock-epic seem simply banal. Haitink came into his masterly own, as predicted, in the 'Works of Peace' and the hero's withdrawal.

More of a useful polarity, perhaps, is between Gergiev at the LSO - unpredictable, exciting, edge-of-seat music-making that can disappoint - and Jurowski at the London Philharmonic - always immaculately prepared, intensely musical but just once in a while a little reined-in. His Glyndebourne Betrothal in a Monastery whizzes past with incredible detail and ensemble-work, but perhaps not enough of the love Gergiev displays for the young couples' moonstruck music. Anyway, I'm mighty glad Glyndebourne chose this as one of the first two releases from their archive: 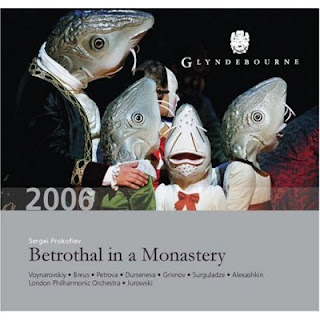 More on that in the July BBC Music Magazine, which is a bit of a Jurowski love-in. But I'm awestruck by the man and his breadth of knowledge. I've never had a happier time on the lecturing circuit than the Betrothal study day back in May 2006. Here's a visual reminder, of VJ (who played for excerpts with four Glyndebourne chorenes and dug out for us a film of the Vakhtangov Theatre's Gozzi Turandot), the very interesting and friendly director/designer Daniel Slater and myself, taken by a lady who sent me the photo through the post, but whose handwriting I've never been able to decipher to send her a thank-you (could it be Alison Sayles?):


While Jurowski hands over his Onegin baton at Glyndebourne (see below) to the by all accounts very promising Kirill Karabits, another hero of the British opera circuit, Antonio Pappano, has been fighting manfully and behaving very considerately towards an ill-cast line-up in the Royal Opera Don Carlo. I did say in my Boccanegra blogspot that the present team would be very hard-pressed to come anywhere near the dream Boccanegra quartet of Harteros, Furlanetto, Gallo and Haddock. The fact that Furlanetto was Philip offered some anticipatory reassurance, and he was by a long way the star of the show in the greatest act of Italian opera, the Fourth. All the following photographs are by Catherine Ashmore for the Royal Opera: 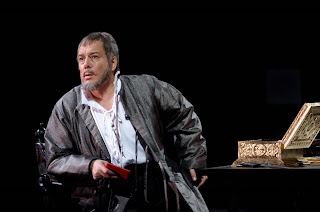 As for the rest, Villazon and Poplavskaya were overparted, had to be cautiously nurtured by Pappano and occasionally produced the odd lovely phrase. But neither flips over the stave and blossoms in the way that Verdi demands. Pops' is a voice in parts, and if she sorts out her top, she'll still have a future. They were, at least, touching in the last act. 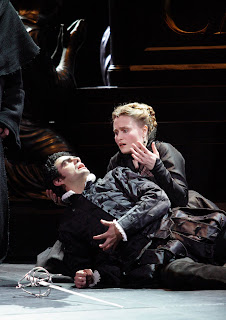 Or maybe it's just that the final duet, 'We'll meet in a better world', always reduces me to tears because the last time I heard it at the Garden, with the exquisite Mattila and Julian Gavin, was in the company of my dearest older friend Trude Winik. A long-term student of my opera classes, Trude had lost all her Viennese family in Treblinka and, having successfully escaped to England, spent every day of her life feeling guilty and depressed that she had survived. When she finally received her 'National Socialist Compensation Fund' money from the Austrian government, she spent half on a donation to Save the Children and the rest on a box at the opera for her closest friends. As she got into her taxi at the end of a truly great evening and there was a kerfuffle with the seatbelt, she told the driver, 'you can strangle me now, I've had my evening'. And she didn't really go out again after that until she died at the age of 87.

Had I taken her to the Hytner production, and not the Bondy show, I'd have had to muffle my disappointment. How odd that a theatre director who thrives on naturalism and human warmth in his National Theatre productions couldn't pare down the Italianate posturings of Villazon, Ganassi and a wobbling, frequently tone-sharp Greek replacing Keenlyside as Posa. The regal couple had dignity, but even Furlanetto, I imagine, could be persuaded to be more inward and less Italianate-sobby by a different director. The sets by Bob Crowley were inconsistent - some striking, others tacky - and the Auto da Fe scene mixed Pythonesque crowd babble with a not very convincing attempt at ritual humiliation: 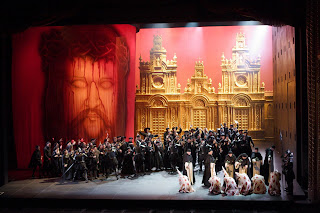 Does it have to look so cheap and nasty? My companion for the evening, Jill Dunkerton from the National Gallery, pointed out that Philip, as Titian's patron, was an extremely cultured man: the Escorial is not about garish reds and golds. In any case, the director faces big problems with the crowd scene: how do you make such a preposterous ceremonial not seem absurd, however horrible? We're too tainted by Monty P and 'what a day, what a day for an auto da fe', with which I anticipate being sharply regaled in Robert Carsen's production of Candide at English National Opera next week.
Posted by David at 13:02