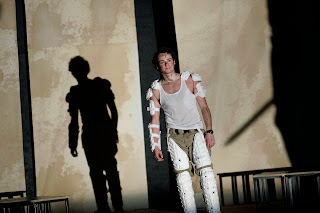 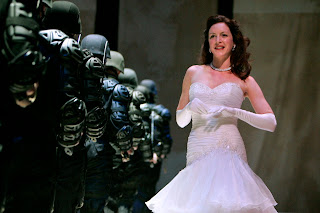 Few, I think, would claim Troilus and Cressida as their best-loved Shakespeare play, but it exercised a horrible fascination on me when I was at university, and it does so still. None of the three productions I've now seen resembled the other two in any shape or form, and all of them raised more questions than answers.Declan Donnellan's modern-dress production for Cheek by Jowl, now enjoying a well-deserved residency at the Barbican Theatre, didn't start terribly well. Even for spectators like myself who knew the characters, it could be quite confusing working one's way through the vast dramatis personae, and three very puzzling performances didn't help: Alex Waldmann (appearing in the first photo above as taken by Keith Pattinson) and Lucy Briggs-Owen as the not-always-central lovers were compelling and even moving at times but I couldn't understand what they, or Donnellan, wanted to say about their capricious natures, while the bizarre delivery of Ryan Kiggell's Ulysses threw away two of the finest speeches in all Shakespeare (if I found myself switching off in them, what could it have been like for Troilus virgins?) In fact a great deal of the verse was poorly spoken, which as my friend Simon pointed out was particularly tough given the knotty language of this problem play.

Minutes into the second half, however, it all took wing and the intertwining themes of brutal war and vacuous vs fledgling love were compellingly presented. I enjoyed the Helen of Marianne Oldham (also pictured above by Keith Pattinson), a celebrity mannequin suddenly disturbed by all she's so unthinkingly been through, and there were two first-class interpretations: David Caves's noble, naive Hector, whose slaying at the hands of Achilles' myrmidons was rightly unbearable, and the production's greatest coup in having Richard Cant portray Thersites as a waspish drag queen with a cleaning fetish. The rendering of the scene in the Greek camp where he/she entertains the temporarily trucing enemies was unforgettable.

I'm glad to be able to say all this, because at the interval I was thinking like Troilus 'words, words, mere words, no matter from the heart', and reflecting on how much more touching in some ways had been the serendipitous performance I caught outside the White Tower on Friday. I'd taken my eight-year-old friend Lucien on a big day out in the city, an exhausting but thoroughly rewarding six hours' rambling. As we sat eating our sandwiches, a group of actors in Elizabethan costume stepped out before us on the ravens' lawn and started to deliver a little drama about mock sword fights to honour Good Queen Bess. They'd nicked some Shakespearean lines and the centrepiece of the portmanteau plot was a Shakespeare in Love-like idea about the wife of a weedy swordfighter outstripping him in combat. The drama was to be continued at 3pm, but Lucien, much as he loved it, thought we had yet more to see and do in the multiplicity of first-rate museums that is the Tower of London. Anyhow, here he is enjoying the show: 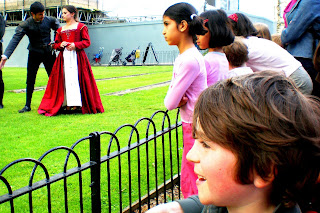