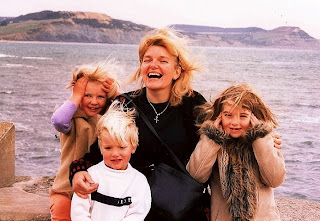 Nell Harris (nee Martin), a close friend for over 25 years, died peacefully on Saturday afternoon. I took the above photo of a windswept Nell and her three lovely children - my goddaughter Rosie May on the right, Eliza and Paddy - in 2002 when they came to meet us at Lyme Regis at the end of one of our Coast Path hauls. Nell kept an astonishingly wise perspective during her years of illness. Sometimes she could be bleakly humorous, only occasionally angry or despairing. We had some wonderful times together even in the last few months, among them the family's trip to our Herefordshire retreat on the hottest weekend of the year, the importance of which neither Nell nor her husband Geoff ever left me in any doubt about, and the visit to Glastonbury in September - there should have been more - with our mutual friend (and Rosie's godmother) Eleanor.

By what I can only call a happy coincidence - as I always feel slightly uneasy about that 'meant to be' stuff - I phoned Eleanor on her mobile on Saturday afternoon just when she was sitting with Nell in the hospice. We all thought - and I found this particularly hard to take - that Nell was unconscious, but she made her feelings felt by light pressures of the hand. Eleanor, who said it was an astonishing experience - 'like being at a birth'- asked her if she'd like me to say anything, and she signalled that she would, so I did - twice, through the receiver Eleanor held to her ear. She died a couple of hours later. Let me never curse the mobile phone again.

That weekend, I was steeped in scripting and selecting examples for the forthcoming Radio 3 Building a Library on Sibelius's Sixth Symphony for a Monday morning deadline. It was strange to intertwine this with phone reports of Nell's condition, but I couldn't have been listening to a more bracing or philosophic piece. I wouldn't call the end exactly positive - the pantheistic hymns of praise fade to a single note of infinity - but it all seems so organic and natural (in the best performances, that is). Curiously, it was a disc of the Sixth - the 'winner', as it turns out, of the programme, though that's on hold for a week and a half - which I took in to Charing Cross Hospital when I had a brain scan several years ago. Of course it was a wasted effort: the MRI machine made such a racket that the music being piped into the room was obliterated. But it's now, more than ever, a desert island piece of mine. I can hear Nell saying 'how wonderful' at this picture of old Jean sitting beneath the pines near his home of Ainola. I found it in an old book Anneli leant me on Ainola from the Finnish Embassy, and I'd never seen it before - though it really needs to be enlarged. 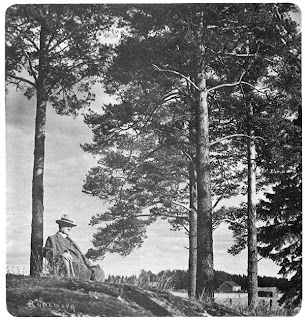 So much for northern timelessness. As for uncanny Glastonbury, the title of my slightly oblique blog entry, 'And did those feet...', will come into play at the funeral service when we sing 'Jerusalem' (in the words of which, as I wrote, Blake is plausibly believed to have been referring to Christ and his putative visit to Somerset with Joseph of Arimathea). Nell told me two months ago that the music she wanted was Tavener's The Protecting Veil, with its piercingly serene high line for cello (it's one of the few of that composer's works I actually love - the liturgies always seem like too pale an imitation of the real thing). Maybe there'll be some fado from Mariza, and Simon will play his flute.

As a perfect example of how to celebrate the person, the September memorial service at St. James Piccadilly for my 'student' Naomi Weaver stood very high on a long list. Six of us from different walks of her life made short tributes, Cathryn Pope sang twice with the expert accompaniment of the very fine organist, and the readings carefully selected from different parts of the Bible in which Naomi was so well steeped were beautifully read by her American friend Elizabeth Hart.

This photograph of Naomi in the early 1990s was kindly sent to me by her son Jonathan. 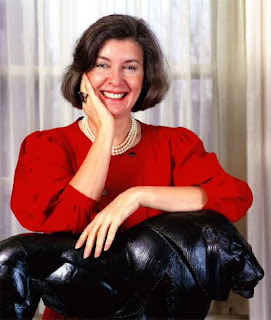 The sculpture is by Rembrandt Bugatti. One of the fascinating things we learnt about Naomi's multiple interests was the intensity of her collecting. Matthew Flowers, great Angela's son, told us of an expedition to New York to acquire a Patrick Heron where she made him walk with her twenty blocks in a snowstorm to get to the gallery first. Deborah Ashencaen spoke about Naomi's love and knowledge of Himalayan art.

As for music, I remember her as a quiet student who would always make her feelings known, gently but firmly. She was no slouch in standing up for much-maligned Lulu or Donna Anna, contributed a paper on the various Marys when we were 'doing' Parsifal, and always sent cards to me addressed to 'Prof. Nice'. When I told her I was no such thing, she replied, 'well, you are to me', and carried on regardless. The last card I had from her, a fortnight before her totally unexpected death, gave me the details of the travel firm with which she'd toured more or less independently around Uzbekistan. It was, again, a happy coincidence that I'd just had my longest ever conversation with her over tea, in which I learnt much more about her childhood in Rhodesia, her solitary travels around Africa and her most recent trip. How often we miss out on these opportunities - but it's wonderful when they happen.
Posted by David at 12:23