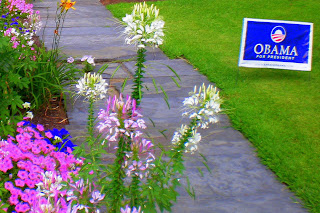 Last seen among the neatly manicured lawns and flowerbeds of Rhinebeck up the Hudson, August. Wish I was there in NY now.

If spirits really walk, then Martin Luther King is doing a backflip somewhere in Washington. But quite apart from that historic change of heart, when was there last a nobler or more sincere-seeming President than Barack Obama? If only he can honour all his election pledges. It's quite a list.

You can reinforce your hopes in those pledges, and leave a message in Washington, via this excellent campaigning site, Avaaz.

In the meantime, there was on another site, until today, a Washington scenario that ain't gonna happen, now or ever. I'm sad in a way that the inspired artists have done the decent thing and that you can no longer hear the wit and wisdom of La Palin (for it was she sitting at the desk until today), nor spin the globe to land in 'Somewherestan', nor click on all the other little jokes, like the exploding Alaskan wildlife behind the door and the 'nucular' trigger on the phone... Back in 2016, they say. Well, we'll see.

PS (Wednesday lunchtime): the flipside - projections for the result of the Californian bid to pass Proposition 8 (against gay 'marriages', ie full civil rights) suggest that the expected 52/48 pass will be the outcome of what one observer calls 'the heavy, and new, black voter turnout for Obama in California'. Obama himself is against unions 'not ordained by God'. It's never that simple, is it?

PPS (late Wednesday night): I'm confused. Obama is against gay 'marriage' but not against 'civil unions' - that's what we mean here by 'civil partnerships', right? So what's the difference? Blessing in church? Can someone clarify?

10 November: someone has - thank you, George (and thank you, Barack Obama). Do follow this link to Obama's TV interview with Civil Rights activists. Note especially that Obama states clearly he is ‘a strong supporter not of a weak version of civil unions but a strong version and ((of))... the rights which are conferred at the federal level to persons of a same sex union.' His line on religion: ‘I don’t think the Church should be making these determinations when it comes to legal rights as conferred by the state’ - although he adds that his church, the United Church of Christ, DOES support civil unions, and otherwise. discrimination is 'unacceptable...I’m going to fight hard to make sure those rights are available’.

16 November: thanks again to George, here's a clip which I don't want to lose sight of - a one-minute extract of Senator Obama in 2005 reciting Copland’s Lincoln Portrait with the Chicago Symphony Orchestra conducted by Bill Eddins. The words, as the blogger who provided the link pointed out, are of course prophetic.
Posted by David at 08:37

On the whole Prop 8 thing and African-Americans, from hearsay (being neither Af-Am nor gay), my understanding is that in the aggregate, the Af-Am is far from fully tolerant and progressive when it comes to gay marriage. That was the unwitting side effect of so many Af-Am's being fired up to go to the polls in California and Florida, a case of the law of unintended consequences.

Regarding the distinction between civil unions and marriage, probably the wikipedia entry is a good a place as any to start.

But to your overall point, so many of us are so relieved that Barack Obama won the election. He's going to inherit a terrible mess, which the Bushies will do their worst to exacerbate in the 70+ days they have left. The terminally right-wing are hopeless, but the mushy middle are at least willing to give him a shot. Barack will need all the luck he can get.

Many thanks for that, George. It is a pity all this muddies the waters, and that the rather unpalateable truth you cite brings accusations of racism from some quarters.

I'm still uncertain, despite reading Wikipedia: does Obama condone the signing of a civil contract between gay partners, ie what gives them equal rights in terms of inheritance and so on? That, at least, would be essential. I know he spoke up for the gay community in his speech, but how far does that go? I also know there are certain things he might like to pass but will never be able to if he wants to hold on to power - the usual devil's pact.

Found this video link for you.

I'm very grateful for that link, George - and apologies for tardy thanks (it takes me ages to watch these things on the computer, as the flow is broken up every five seconds).

What Obama says is clear and fair. As a civilly-partnered UK citizen who flipped every time anyone called our partnership a 'marriage' - we had a 'just not married' party to underline the point - I understand that. But I wouldn't deny the rights of those who DO wish to call it by that name.

Somewhat off from the previous topic, I sent to one of your compatriots this link about our Prez-to-be, but I hadn't found this related link at the time.

Wonderful to have that one-minute clip of Obama in the Copland - and, as the blogger says, apt words indeed. Thanks again, George, for your web-connectedness.