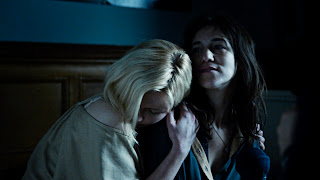 Anything Lars von Trier makes is worth seeing - anything (and I know, all that nonsense he spouted at Cannes, which is so crucifying to watch, led a lot people to turn their backs on him, and in a sense who can blame them?) I couldn't steel myself to see Antichrist, though one day I shall, and I can well believe those who say it's not as sensationalist in its horrors as others make it out to be. It was even a bit of a task to get to Melancholia, as I'll admit it rings true to the not so distant past, but I knew we had to go, and to see it on the big screen which, by and large, we've all but abandoned other than for special events in recent years.

Funny, that, how certain modes of being feel right at one time and not another. We used to make a regular Monday thing of it after my classes - tea in Bertaux, a film at the Curzon Soho (at least since the Metro and the Lumiere gave up the ghost), a Chinese meal afterwards in the New World. Maybe cinemas are noisier, less pleasurable to visit than they used to be; I know the Empire Leicester Square is a no-go zone because of the shattering volume which even destroyed our pleasure in The Incredibles and The Life Aquatic, which shows how far back we're talking. As for the audience, I'm kinda glad I wasn't there (J was) when our friend Hen challenged the chatterers throughout a Whiteley's screening of Malcolm X with 'shut the fuck up and you might learn something'. She would like you all to know that it worked. 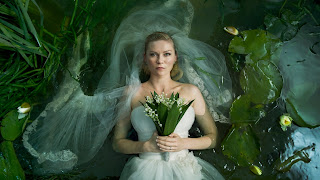 But there were very few folk the last time I went to the commercial cinema, to see Of Gods and Men in Mayfair - our popcorning neighbours were soon stunned into silence - and even fewer at the Curzon Chelsea on Sunday evening. I was glad we saw both in the right circumstances. What to say about the extraordinary collision of two themes in Melancholia without regurgitating the little plot there is? Kirsten Dunst rings frighteningly true as Justine, a pretty girl first sinking into, then deeply sunk in, a depression that may or may not give her oracular knowledge of the impending world's end (Dunst admits to having been there, like von Trier; everything she does feels authentic). There's a second, pivotal contribution from the strange, mumbly but compelling Charlotte Gainsbourg (pictured up top with Dunst in the first of Christan Gesnaes' images). There are also good flanking performances, not least from the very lovely Alexander of the hugely talented Skarsgård tribe - I barely recognised Papa Stellan - as the new husband Justine apparently loves. 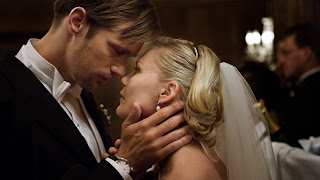 But it's von Trier's personal trajectory which amazes. Yes, the opening sequence is one of the most spellbinding in cinematic history; yes, the dysfunctional wedding does go on, but certainly every time the Tristan Prelude - the only music in the film other than incidental stuff at the reception - resurfaces, expect staggering imagery. Could von Trier have handled the Bayreuth Ring after all, or is his own imagination too big for other people's fantasies? It was a bit worrying, of course, that he snips bars out of Wagner here and there, not least for the denouement, where he leaps so quickly to the climax of all that unquenchable yearning that I laughed when I shouldn't (nervously? Not sure). But the music, and the sounds of near-silence, certainly add to the metaphysical dimension, and the concentration on this hermetically sealed world of the big house by the sea is harrowing. 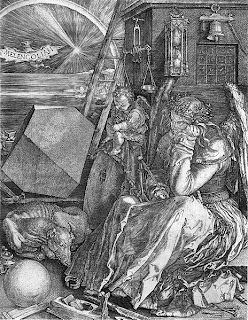 Unique, unrepeatable, probably indescribable. I see in any case that I haven't made a good job, but I'm a bit wonky anyway from three and a half hours moving between the dentist's chair and waiting room as the poor woman tried to deaden an inflamed nerve to get a tooth out. I am, apparently, the most intractable case she's ever had, though at least she finally believed me that the nerve in question was causing all the trouble, when she at last got through to tackle it head on. Seems to tie in well with all this, somehow, especially as Durer's allegorical depressive seems to have a bad case of toothache and as I sat through Melancholia worriting about the pain in the lower right corner of my mouth. That, of course, added to the edginess of the viewing experience.
Posted by David at 14:44

Poor you! Hope you're not too traumatised.

Yes, Liz, I am - traumatised. The dentist told me she was too. But at least we got past the point of no hope and she did finally locate the source of my agony...

You are a braver soul than I, to go to a film like Melancholia after trauma like that in the dentist's chair. I think I would have retreated into a cozy book, like Mr. Fortune's Maggot, perchance.

Well, it was before, actually, but I was still anticipating the worst. Summer Will Show, with infant mortality from smallpox, is no more comforting so far...

I saw Melancholia yesterday and was disappointed. I still think that Dogville and Manderlay are wonderful and extraordinary but Melancholia is in the same vein as Antichrist. It starts off as one thing and then becomes something so ridiculous that you lose interest. He seems to have a problem sustaining films or falling into a kind of parody that becomes cloying and just plain silly.

The real shock in Antichrist is not the genital mutilation or indeed the brutal tortures inflicted on Willem Dafoe but the absurd plot change whereby a small domestic meditation about grief turns into witchfinder general. Melancholia was beautifully filmed and I think that there were some good moments. I thought the stretch limo trying to turn a corner was hilarious; likewise the ghastly parentals. Charlotte Rampling was so grim as the mother and John Hurt was a complete pain. I enjoyed Kiefer Sutherland as the vaguely normal one who was shelling out all the cash. Stellan Skarsgard was truly menacing as Kirsten Dunst's boss and his son Alexander was moving as her poor sap of a husband who should have known better.

I believed in one way in Kirsten's depression and that feeling of incredible weight and misery. I believed in Charlotte's concern but they were never Justine and Claire for me. I think that was the main problem - I am not sure that I ever believed in the story or the relationship between the sisters. For a film on how mental illness can dominate a family in the most complex and unhappy ways I think that Jane Campion's Sweetie is still the most accurate. The planets and the Wagner were incredibly powerful but surely Kubrick taught us about how to do that and we all have to accept that Lars knows his film history.

Melancholia lacked any of the beauty of The Sacrifice - also referenced by Lars - or the original Christian weirdness of Terrence Malick's The Tree of Life.

I guess it all depends on whether LvT can take you with him or not. I can see what you mean, but I was more in a state of wonder than not - though underneath I knew the whole apocalypse thing was just plain silly, and did indeed belong to a 'lower' genre of disaster movies.