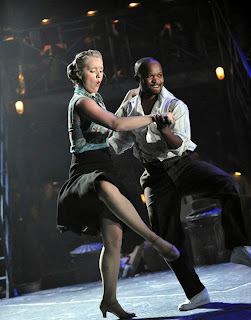 Maybe not quite so much any more: from the Decca recording sessions up in Glasgow's Govan Town Hall through the two ENO runs, I stayed resolutely moony about Kurt Weill's 'American opera'. I suppose I was never blind to its flaws - the lyrics by Langston Hughes (rather than the spoken dialogue, though both have their heart in the right place), the baggy first act with a few below-par numbers.

Yet they seemed more apparent on Friday night when I revisited The Opera Group's long-running success two years on, back at the Young Vic. I can still admire what Weill, Huges and Elmer Rice were trying to do: to convey the shortfall between the urban dream - food, glorious food, Broadway, success after school graduation - and the reality within an extended multi-racial community (probably not extending, in 1947, to blacks beyond the caretaker who gets the cheesy number 'A marble and a star').

Still, it did sag at times, with not all the text coming over the admirably large orchestra - the excellent Southbank Sinfonia seamlessly conducted by Tim Murray - which faces straight out at the audience in two tiers of the 'tenement' - some weaknesses in smaller roles and not much sense of atmosphere (it was hot outside, but cool within, incidentally). Photos by Alastair Muir (show-stealing Kate Nelson as Mae Jones and John Moabi as Dick McGann above in 'Moon-faced, starry-eyed') except for the Rose and Harry Easter shot by Keith Pattison. 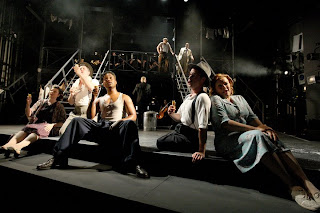 There have been a few cast changes, chiefly in the juve roles. Paul Curievici looks the part of the bookish young Sam Kaplan, and sings 'Lonely House' with the right ache and anger, only slightly bottling up at the very top; Susanna Hurrell, pictured below with James McOran Campbell's Harry Easter, has a dangerous spread for a young 'un above the stave, but acted neatly and of course wrung us out with Rose's devastation after the tragedy (I always think it must be a gift of a part to emote truthfully; only imagine how you'd feel as a daughter suffering a horrible loss). 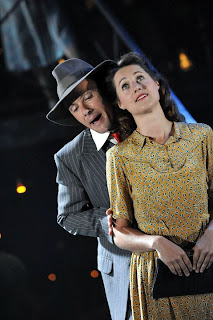 We had a new, reactionary-violent father Maurrant in Geof Dolton, looking the part but not quite butch-brutal enough (I think bass-baritone, as in Sam Ramey on the Decca recording); but his numbers are the most awkward, even if the fine ensemble did paper over the embarrassment of 'I/He loved her too'. Downtrodden-radiant Anna Maurrant was played again by Elena Ferrari: where has this soprano been all my life? She's a superb, intense actress and the only one in the cast with a seemingly flawless technique. And though John Fulljames's production has never totally worked - in the stalls, you can't see what they're all chalking on the pavement - it does make poignant and believable the potentially sentimental 'A boy like you'. 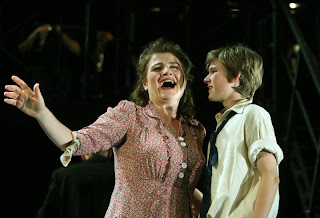 The direct emotion here comes not just from Ferrari but also from 12-year old Tyler Fagan (actually not sure that's him pictured with her above), a real natural who'll surely be singing Miles in The Turn of the Screw soon (and I guess it had better be very soon). The last Willie Maurrant I saw in this production, George Longworth, was also superb, so someone's doing a good line in training treble-actors who can really project. And all the kids, as before, are spirited.

Weill's score still moves me to tears - profoundly so, I find, in some of the underscoring, or rather the melodramas: that moment when Rose finally picks up her suitcase to leave, scored for cor anglais supported by Mahlerian harp, is a heartbreaker. You can get a sense of it in the only YouTube clip - among a sea of student production films, some no doubt good, but I didn't have time to check - from either of the two excellent complete recordings (there are also excerpts from the Broadway original). This is Bonaventura 'Bonny' Bottone as Sam with Janis Kelly - who would now make another superb Anna Maurrant - as Rose in the ENO production, conducted by Carl Davis, and the duet incorporating Whitman's 'When Lilacs Last in the Dooryard Bloomed' at the end of Act 1.

We also have to hear 'Lonely House', one of the great 20th century tenor 'arias'. I've been listening again, with obvious emotion, to the late Jerry Hadley, such a genial presence during the recording sessions back in 1989 along with another great no longer with us, Arleen Auger (she and her good friend Della Jones camped it up as the nursemaids). Adrian Dwyer is pretty good here under I know not what circumstances, and not much graced with close-ups, but never mind

And in the meantime, in a quest for DVD life after The West Wing, we decided another American street scene, very contemporary, ticky-tacky Californian, was not for us: I picked up series one of Weeds, about a desperate widowed housewife who deals cannabis to keep her house and kids on the level, on the strength of the star, Mary-Louise Parker (pictured below by Gage Skidmore), a major West Wing light (she's also superb in Angels in America). 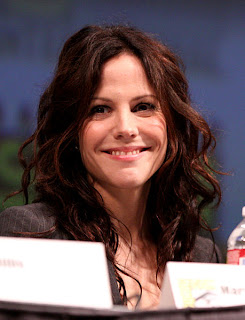 Can't fault her, not any of the other actors, but it's all so relentlessly grubby that I don't give a shit about any of the characters. I have no problem with filth out of the mouths of believable, rounded humanity, but there's next to nothing of that here.

Then we tried two episodes of Studio 60 on the Sunset Strip, also devised (like the first four series of WW) by Aaron Sorkin, but the milieu - the usual self-regarding American showbiz scene - doesn't really interest me. And the culmination of the 'new' programme the characters are all working on, with John Mauceri - only connect, last heard of recording that Decca Street Scene and a few other things - conducting a cheesy version of G&S's Major General's Song, did not inspire the confidence to continue. Will now take up John Sleopkura/Graham's recommendation of the New Orleans drama Treme since fibre is desperately lacking after The West Wing.
Posted by David at 09:57

I too saw Friday's production of Street Scene. Having never seen any opera at all before I was unsure what to expect. Everyone was brilliant. Tyler Fagan was superb as Willie and certainly stole the show during his scenes - -one to watch for the future.

I too enjoyed Angels over America, but I couldn't understand what Emma Thompson flapping about in different coloured outfits was all about, nor the bit towards the end when Prior goes off to a strange heavenly place where everyone is wearing red cloaks or gowns. What on earth was that about? Al Pacino as the shocking hypocrite Roy Cohn was excellent, as was Mary Louise Parker, with zilch self-confidence and self-belief.
John Graham

I think that's what they call Magic Realism, which you must appreciate, surely? Or was it whimsy too far? I salute such ambition in a play - they're usually so prosaic. Ditto in Ibsen and Strindberg...

Magic realism? But surely it must have played some rational part in the rest of the thing, otherwise, why include it? What was its connection? What did Emma Thompson's remarks actually mean, or refer to? All very confusing. And why was she dressed in white and then black with cream edging? Would either you or other bloggers please explain.
John Graham

Pretty obvious, I'd have thought - they were our hero Prior Walter's drug-induced hallucinations. All the workings of his confused but interesting mind, just as the Polar fantasy is an emanation of the pill-popping housewife. Em is a good, and then an avenging, angel. Anyway I'd buy anything she does, and I bought it all.