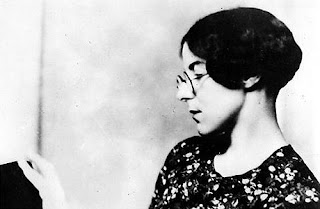 No, not the catchphrase demand (actually three 'Sylvia's) for diva Bills of La Gran Scena opera company, but a salute to two masterly novels by one of the most singular of all writers, Sylvia Townsend Warner. She seems to me something of a forerunner of the fabulous Hilary Mantel in her imaginative approach to historical truth; to find out more I'd have to read Summer Will Show, about the 1848 Paris uprising - next on the list - as soon as I can following After the Death of Don Juan.

But I started with what, for 1926, was contemporary subject-matter, thanks to a pointer from Richard Mabey in Beechcombings, his characteristically free-range book on British trees. The second half of Townsend Warner's Lolly Willowes is set in Mabey's stamping-ground of the beech-rich Chilterns. It's the subdued spinster's sudden dash for freedom after twenty years in the suffocating household of her brother and sister-in-law. Longing after 'a something that was shadowy and menacing, and yet in some way congenial', she's struck by the beech sprays in a bouquet put together by a London florist: 'they smelt of woods, of dark rustling woods like the wood to whose edge she came so often in the country of her autumn imagination'. 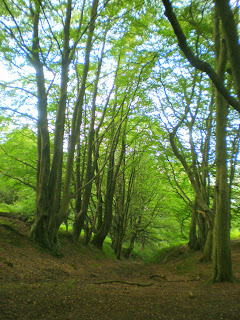 So off goes Laura - no longer diminished to 'Aunt Lolly' - to Great Mop. Her only seeming ally, dilettantish nephew Titus, turns out to be a disappointment in the new environment. His 'deep Willowes love for country sites and smells...was different in kind from hers'.

It was comfortable, it was portable, it was a reasonable appreciative appetite, a possessive and masculine love. It almost estranged her from Great Mop that he should be able to love it so well, and express his love so easily. He loved the countryside as though it were a body.

She had not loved it so. For days at a time she had been unconscious of its outward aspect, for long before she saw it she had loved it and blessed it. With no earnest but a name, a few lines and letters on a map, and a spray of beech-leaves, she had trusted the place and staked everything on her trust.

She retreats, if that's the right word,deeper into her own personal mystery, finding the local witches' sabbath and even Satan himself, who gets the big speech about woman's independence, 'very probably...quite stupid.' Even if she's sold her soul, she has her vision. 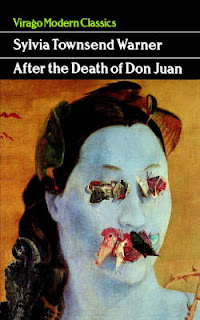 Far more pragmatic, and pungent in quite a different way, is Townsend Warner's riff on life after the supposed damnation of Mozart's and Moliere's Don Juan/Giovanni. The extra dimension here is her experience of the Spanish Civil War in 1936. Dona Ana and her Ottavio seem to Juan's father, the well-meaning Don Saturno, a 'pair of elegant waxworks, one of which had a mechanism enabling her to sing as eloquently as a canary, the other incapable of saying more than Papa and Mamma'. In fact both prove more dangerous as forerunners of Fascist allies.

Townsend Warner's love of Spain is palpable in the most eloquent descriptions of sunrises and sunsets, equal to the many human sketches. The scene where she takes us inside Don Saturno's mind as he works on his Aristophanes translations is consummate, and his fate haunts the reader. The peasants are never idealised, but their bleak tenacity is mirrored in the prose. Townsend Warner describes the most admirable character, Ramon, as 'a man of certain steadfast ideas - not uncommon in that, and the ideas were nothing out of the ordinary. What made his peculiar was the steadfastness by which he lived out his creed.'

Which leads me to inflict on you a typically blunt poem on a similar theme by Yevgeny Yevtushenko, whose writings I revisited while preparing 'Babi Yar' for the Passenger class at the City Lit. 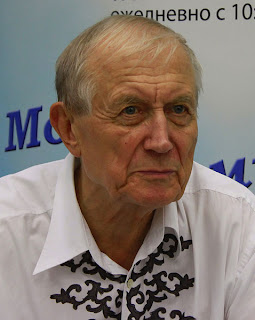 The photo is by Cybersky from 2009, a couple of years after I heard Yevtushenko read 'Babi Yar' before a performance of Shostakovich's Thirteenth Symphony in Carnegie Hall (the near-monotonous delivery struck western ears very strangely). And here is George Reavey's translation of 'Conversation with an American Writer', written in 1961. Forgive me if this system doesn't permit me to space as the poet does.

'You have courage', they tell me.
It's not true. I was never courageous.
I simply felt it unbecoming
to stoop to the cowardice of my colleagues.

I've shaken no foundations,
I simply mocked at pretense and inflation.
Wrote articles. Scribbled no denunciations.
And tried to speak all on my mind.

Yes, I defended men of talent,
branding the hacks, the would-be writers.
But this, in general, we should always do;
and yet they keep stressing my courage.

Oh, our descendants will burn with bitter shame
to remember, when punishing vile acts,
that most peculiar time, when
plain honesty was labelled 'courage'.

Now back to STW - to read more of her novels, and find out more about her extraordinary life: her political convictions and her long-term relationship with poet Valentine Ackland which made her one of the National Portrait Gallery's recent 'Gay Icons'. The style, though, is the thing, and in that only Mantel can touch her.
Posted by David at 10:18

You've done it again--I have now gone off and purchased Summer Will Show (that one, because of its topic and I could get it instantaneously on the Kindle). I fear I may end my days buried under a pile of part-read books and CDs! Nonetheless.

I do so enjoy your trails of discovery: in this case, from beech trees to Townsend Warner to Yevtushenko and back again, with a National Gallery show thrown in. (And then there's Hilary Mantel. I've only read a couple of hers, most recently Wolf Hall, which was splendid.)

That's what this blog/net business is all about, surely - the enthusiasms (hopefully informed, but no matter if not) of others turning one in unexpected directions. As you say, it can get pricey, all this 'I must get that' - but we're surely a little bit richer for it. And it's up to us to take it or leave it.

Nothing less than the complete oeuvre of HM will do. I've read all the novels now except the one about the giant, and they're all so singular and different from each other. I'm guessing STW is the same.

I found this post when I was looking for pictures for my online Lolly Willowes advent calendar. Your beechwood will be behind window 16, if you don't mind? With credit and a link to your post, of course! :)

Please do, Moa - the asking and the credit are all I ask for. Though you may find the beech photos in this entry ('seeking the queen beech') even more suitable (even if the Sylvia post is the one to link to): http://davidnice.blogspot.com/2011/11/seeking-queen-beech.html