A palace in Fife 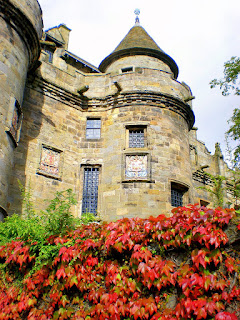 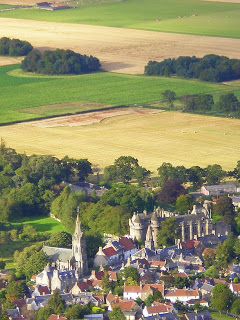 Long gone were thanes and wives - remember Lady Macbeth's little ditty? - when the royals came to Falkland, starting with James II in 1453. It was Jameses IV and V who created the Frenchy Renaissance style and the south range facade with its six bays, two tiers, buttresses and roundels of Roman emperors, glimpsed here through roses of the Stuart livery (yellow and red). An 18th century tourist went so far as to call it 'the beautifullest piece of architecture in Britain'. Zounds, sir! 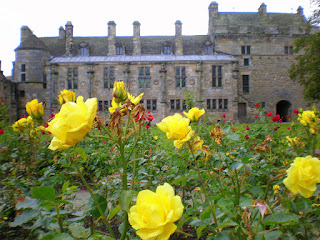 The east range, of similar design and again with French masonic input, is a splendid ruin. 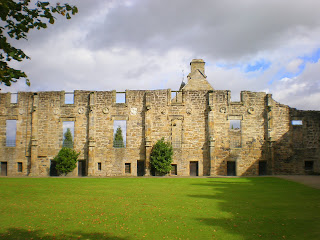 Palace tours, courtesy of the present hereditary keeper Ninian Crichton Stuart - clearly a decent chap with a good social conscience - via the Scots National Trust, are enlivened by the very diverse group of guides (Morningside lady, chatterbox, friendly boy from local institution, ghostlike silent sitter). But the impression is of lugubriousness, offset by some interesting Jacobean beds, a high Catholic chapel and some splendid 17th century Flemish tapestries of natural scenes.

These, though, can hardly compete with the splendours of the garden proper, mostly designed by Percy Crane between 1947 and 1962 to the Crichton Stuarts' specifications. Circles of beech and oak on various levels provide welcome shade, and there's a spectacular herbaceous border running for an unbroken 180 metres. We saw it, I think, at its best, with bees, butterflies and dunnocks flitting around it. 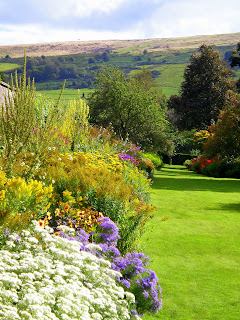 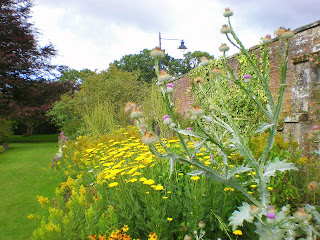 The inner bed is not so profuse, but some of its 320 delphiniums were still in bloom in late August. Of less visual but great historical interest is the Real Tennis Court built in 1539 for James V, older even than the one in Hampton Court. 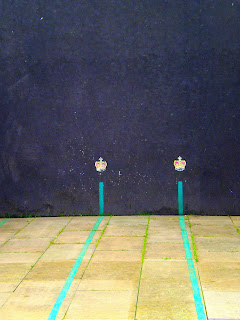 The odd game is still played here by a local society, and barn swifts nest quite happily in the viewing gallery above the heads of chattering visitors. 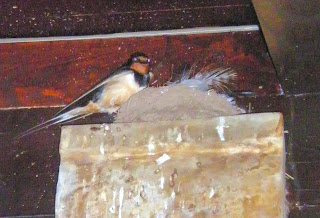 Falkland itself, dominated in the 19th century by the splendidly-named Onesiphorus Tyndall Bruce, flourishes, with its monumental fountain 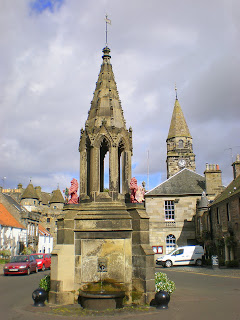 and numerous bridal inscriptions above the doors. 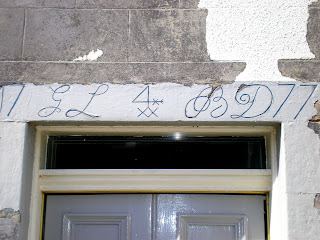 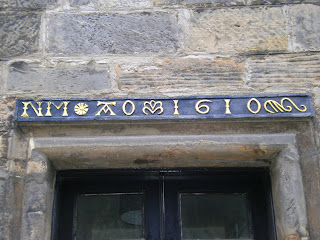 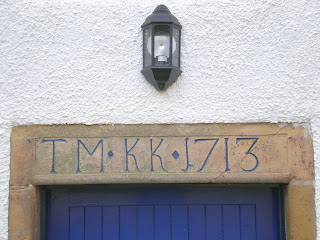 Falkland, 'most clean little town' as it was described in 1723 and remains, stays real by virtue of the former 1931 Linoleum Works, now a bag factory (paper or plastic, I'm not sure which). 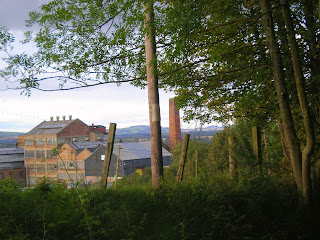 You pass it on the haul up to East Lomond, highest pap of Fife at 424 metres. A climb through pollarded and then high beeches, douglas firs and out on to the heathery hills with views over the town and the north 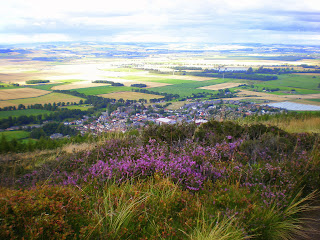 leads eventually to the summit marker (a sudden steep ascent), accessory to an itchy sheep 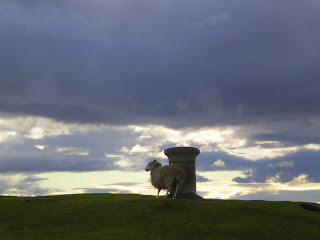 and the Firth of Forth gleams to the south. 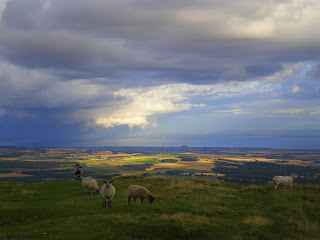 That was a short hike, but, combined with a morning walk up to Castle Law at a mere 249m, it exercised all muscles and severely taxed kneecaps on the way down. On the car drive back to friends Caroline and Alan near Abernethy, we stopped again to catch in the late afternoon sun that village's eleventh century tower, one of two in Scotland presumably based on Italian models. 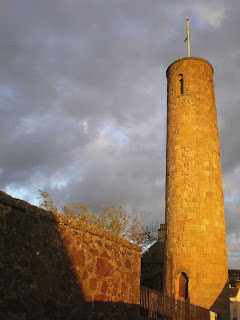 and back to our fastness amid the soon-to-be-harvested fields (view from the bedroom window). 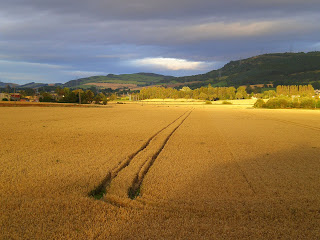 Thus, then, the last days of summer in Scotland.
Posted by David at 13:30

Duncan: This castle hath a pleasant seat; the air
Nimbly and sweetly recommends itself Unto our gentle senses.

Banquo: This guest of summer,
The temple-haunting martlet, does approve
By his lov'd mansionry that the heaven's breath
Smells wooingly here

Ah yes, how could I have forgotten the 'temple-haunting [in this instance the 'tennis-haunting']martlet'. Thank you so much for that.

So, I see I have some catching up to do. Quite a pile, that palace. Wonderful photographs of the landscape, the light. I've always particularly been a sucker for ruins and old towers against a dramatic sky.

I remember attending Mass at Falkland Palace on Sundays when a lot younger, when staying with a relative(adopted)in Fife. And Freddy Crichton Stuart, Knight of Malta, was a fellow congregant back in Edinburgh. Mass is still celebrated each Sunday in Falkland Palace.
John Graham(once slepokura)
ps have you seen the HBO "Treme", about the poor and dispossessed of New Orleans following Katrina? It is unmissable. Full of sadness and pain, but no sentimentality or mawkishness. Also lots of wonderful jazz, rhythm & blues.
John Graham
ps how nice to speak to you by phone recently.

FYI, John, the Dishington-Cloughs also wanted to get married there; can't remember why they didn't in the end. Alexander MS is most amusing, I think, on the celebration of the Tridentine mass in St Andrew's (is it?) Edinburgh.

Treme is high on the list now that we are bereft of West Wing. Going to sample series one of Weeds and Sorkin's Studio 60 but your suggestion would preserve the gravitas with which WW retired.

Next time would prefer to see you in person, please...