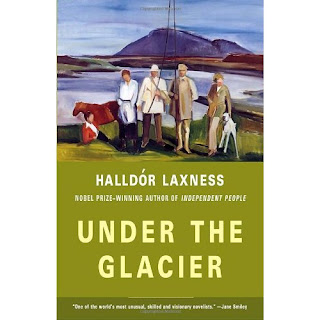 Iceland's Snæfellsjökull, still haunting my dreams since we saw it loom so large in fair if cold weather, is your ultimate powerful fictional backdrop. I'm sure it must have produced more novels than the two I've come across, as recommended by Hilary Finch: a disposable but human detective story by Yrsa Sigurðardóttir, My Soul to Take, and an undisputable mini-masterpiece, Nobel Prize winner Halldór Laxness's Under the Glacier.

How to describe Laxness's metaphysical comedy? Susan Sontag does a better job of it than I can in the introduction to the Vintage edition, laying out categories of novel that defy the 'artificial norm' of 'so-called real life' - 'Science fiction. Tale, fable, allegory. Philosophical novel. Dream novel. Visionary novel. Literature of fantasy. Wisdom lit. Spoof. Sexual turn-on' - before adding that Under the Glacier (in Icelandic the title is the less sellable 'Religion Under the Glacier') is the only novel she knows which fits into all those categories. 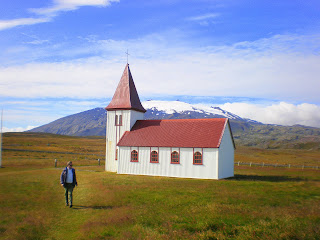 There's a church, of course, but unlike the beautifully kept one at Hellnar, it's been boarded up and a new home owned by a mysterious magnate who only appears past the novel's halfway mark has been jammed right up against it. The protagonist, emissary of the Bishop of Reykjavik who abbreviates himself 'Embi'and starts out, in Sontag's words, as 'the generic Naive Young Man', has to investigate a pastor who seems to have given up his religious duties to fix Primus stoves, a mysterious absent wife called Ua - the noise, the 'resurrected' woman later tells us, eider ducks make - as well as a casket and a possible corpse up on the glacier, which every local acknowledges to be the centre of the universe. 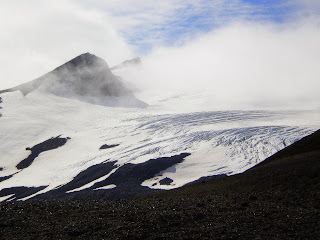 From mordantly witty 'reporting', the novel unfolds to include all sorts of weird interviewees and New Agers - even in 1968, it seems, hippies were finding their way to Snæfellsjökull in search of spiritual enlightenment - within a dissolution of time and space which, Sontag rightly points out, allies it with Ibsen's more supernatural works and Strindberg's A Dream Play. I love its musical refrains: the wry references to Verne's Journey to the Centre of the Earth, the local poet's ode to Palisander wood, the mittens Ua knits for Peruvian fishermen, the shrunken-head ritual - well, that will give you enough of a taste of how weird it all is. But I can't convey the style, which seems to me brilliantly rendered by none other than Magnus Magnusson. 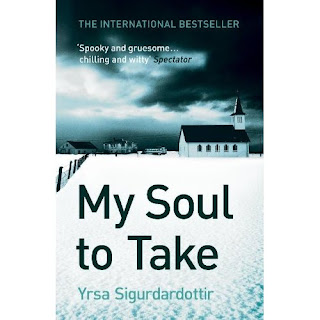 Sigurðardóttir - or rather plain 'Yrsa' as I should call her in Icelandic form - is surprisingly reluctant in her often nailbiting thriller, or perhaps unable, to convey much of a sense of place, beyond the first murder on a foggy basalt beach. One thing I do know: the above cover is completely wrong, since the action, apart from the creepy prologue, takes place in June, in other words in a capricious Icelandic early summer; no snow, despite the elegiac gravestone disquisitions. 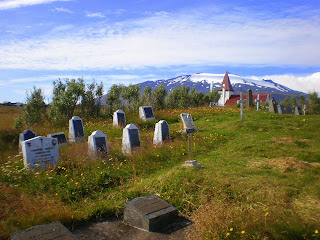 Yrsa does have a warm and witty way with characters, and it's refreshing to have an amiable, slightly prudish and only mildly dysfunctional heroine with a level-headed boyfriend. And here the swipes at new spiritualism are unequivocally incredulous. Was there an implied point-scoring against the slightly alternative hotel at Hellnar which was fully booked when we tried to get a room? Hilary thinks possibly so. On, now, to the Auden/MacNeice Letters from Iceland, which I bought in a handsome first edition for the diplo-mate's birthday: perfect late night reading-aloud material. Then a pile of other Laxnesses, which I've ordered up.

Quick church walk report, before I eventually get round to downloading the pictures and writing it up: 16 churches and 19 miles covered on Saturday in humid, windy and intermittently sunny weather, with a spectacular sunset to round it off. More anon.
Posted by David at 10:28

I can't think of any happier position to be in, than to be reading Laxness for the first time. I don't want to bore you with recommendations, since everything he wrote repays the time spent on it, but along with Joseph Roth's "The Radetzky March", "The Fish Can Sing" is one of the few novels that I re-read every year, and which affects me more each time.

I'd just add that his historical novel "Iceland's Bell" is as subtle, as stirring and as deeply human a nationalist epic as you'll find in any language, (this might be of interest, though it does contain some plot spoilers:

and that if you're back in Iceland, it's enormously worth visiting Laxness's house, Gljufrasteinn; one of the very rare artist-shrines that still feels as if the man himself has only just stepped out of the room.

Please, you will give us your thoughts on your further Icelandic reading, won't you?!

Tak fyrir, Mrs Woffington-Laxness (I presume - in any case, your favourite films and books list overlaps with mine to a remarkable degree). I'll turn to that blog, which I haven't visited for too long, with the greatest of pleasure. Today through the post arrived Independent People, which has to be read, doesn't it, and World Light, because I liked the precis of the subject-matter.

No doubt I'll be hooked enough to continue to your recommendations, as this man is clearly on a par with Joyce and Dostoyevsky, which is saying something.

If the homestead has anything like the spirit of Sibelius's, which is the most vivid house-museum I've ever visited, then I'm in for a treat. Hurrah for Icelanders and, yes, of course, any excuse to return in spirit to that part of the world.

I must add my recommendation of 'The Fish can sing' too. Quite remarkable, and not like anything else I've read.

OK, I get it. Clearly, I must try Laxness again. How could I have not engaged with it the first time, given all you and your commenters say? Meanwhile, I was amused by this: "even in 1968, it seems, hippies were finding their way to Snæfellsjökull." Perhaps this is not so surprising, when you remember that the cheapest flights from the US to Europe at the time were Icelandic Air, with a stopover in Iceland.