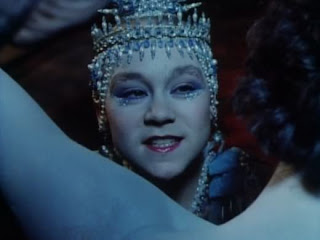 I've been trying to put together a coherent picture in my head of what I really think about Ken Russell's films since news of his death broke earlier this week. And the light went on when someone said his music-and-image sequences were the forerunners of the best-made pop videos. Those are the elements which will stick in the mind for the right reasons.

By and large, though, he tended to reduce distinguished actors to the level of self-indulgent amateurs (I tried to watch Women in Love recently, and gave up after the first 20 minutes which reminded me of nothing less than Monty Python's spoof of Salad Days; one expected a croquet mallet through the heart and spurting comedy blood at any minute). One exception to that rule was an astonishing debut by young actress Imogen Millais-Scott in Salome's Last Dance (pictured above), the only one of his later films I've seen all the way through. Heavenly Imogen spoke Wilde's verse so musically (as you can hear as well as see in the YouTube excerpt below); imagine my surprise when she turned up some years later reading a lesson, very beautifully, at two friends' wedding in the depths of the Oxfordshire countryside. Anyway, all the stuff in the film about the performance in a male brothel wasn't as irrelevant as that sort of thing could be in Ken's films. 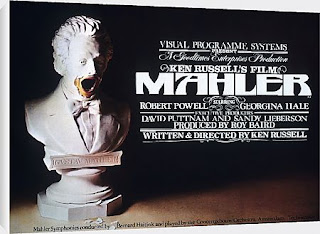 Otherwise, kudos to him for his bold fantasy-riffs on Mahler - there's a very haunting early wood-with-white-horse scene set to music from the Third Symphony - and Tchaikovsky in The Music Lovers, again hit-and-miss but with some very telling music-and-vision sequences (I dimly remember a nice fit with something, quite unexpectedly, from another Third Symphony, the 'Polish'). 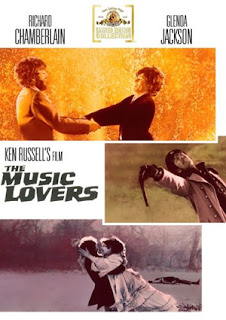 Maybe those early Monitor films were striking at the time, too, but I didn't quite see what all the fuss was about over the Elgar rhapsody when I caught up with it many years later. I remember laughing for all the wrong reasons over his much later Vaughan Williams documentary - a scene for each of the symphonies, wasn't it, in one of which poor Ursula wandered in front of an army of tanks. Though there was a rather imaginative matching in some other doc - sorry to be so vague - of a steam train chugging through the English countryside to Elgar's Introduction and Allegro for strings (seemed silly to start with, but the central fugue made sense.

Yes, there was a decline. I timidly abstained from going to see the reported dog's dinner that was his ENO Princess Ida (love the piece too much, perhaps, though I don't see how it could ever be staged these days), and he wrote some truly dreadful though fitfully amusing opera criticism (many a time was I seated near His Flamboyant Noisiness).

What's most regrettable, though, is how not enough of his work is available on DVD; hence my approximate memories above. So praise be to YouTube for filling in the gaps: here's Salome's failed seduction of John the Baptist, the word-music backed up by threefold reprises of 'The Young Prince and Princess' from Rimsky-Korsakov's Scheherazade (and a bit of The Golden Cockerel for good measure).

Maybe that official-reissue dearth will be remedied now Ken's gone. After all, the sheer eclecticism is something (who else would film both Sandy Wilson's The Boy Friend AND rock opera Tommy?) And I have yet to see The Devils, with those incredible-looking sets by Derek Jarman, another British original who died, unlike Russell, far too young.
Posted by David at 10:44

I think KR had undeniable mastery of the camera and had a true British sensibility. He got England in all the weird and wonderful colours. The beauty of the landscape in Women In Love and indeed in Elgar. He got the way us Brits move in a landscape and how in some basic way we are informed by that beauty.

What he did not get was narrative progression or learning that less is more. Glenda's exposed ginger pubic hair in Tchaikowski, Glenda and the cows in Women in Love, Mrs Mahler the first driving everyone insane or Norman Bates in China Blue......ahhhhh!

The Devils is horrid and cruel and nasty and too long but it had something quite unforgettable about it. Partly due to the glorious sets by Derek Jarman and the horrid Huxley it is based on. But there is a direct line from The Devils to Derek Jarman's own films, Peter Greenaway and even John Boorman. I am not sure that I like those kind of films but it is a British school.

I rather enjoyed Elgar when I saw it again a few years back.I saw it as a comparison to John Bridcut's marvellous film on Elgar.

That's a welcome extra dimension, Henrietta. I've not seen China Blue nor (as I wrote) The Devils, but I have read Huxley's The Devils of Loudun which of course is not pointedly horrid but just trying to present the facts and speculate about them. I suppose we should be thankful Ken never directed Prokofiev's The Fiery Angel, though David Freeman more or less replicated the Devils scenario in Act V of his Kirov production...

John Bridcut made an interesting comment in the Guardian about the Elgar doc - he points out how burned in our consciousnesses is that image of the horse (or is it pony) ride on the Malvern Hills, but wryly observes that KR must have KNOWN the music Elgar wrote for Powick Asylum was played by staff and not inmates, as he depicts it. He was always, JB implies, looking for the strongest visual image regardless of the boring old truth.

Indeed why let tedious truth get in the way - look at Lisztomania. It is all about excess and suppressed anything.
But it is that British belief that bad acting is absolutely fine that I cannot stand. Some of the performances in his films are so dreadful that one is left angry. Though nothing is quite as bad as KR's own performance as the British spook in The Russia House. Truly memorable and astounding in a Madonna kind of way. Every word is pronounced incorrectly so much so that the director decided to cut him out half way through.

Oh dear, now you're determined to rake up the worst - and there was I having forgotten all about Lisztomania. Have to hand it to Ken for sheer, what is it, 'thinking outside the box', I mean - Roger Daltrey as the great virtuoso?

I enjoyed not only the post here, but the entire lively exchange--even though I think the only film I've seen of Ken Russell's is Women in Love, of which I remember not so much, which I gather is just as well (though I do have a weakness for Glenda Jackson).

Glenda's good as unfortunate Antonina Milyukova, and in other films, though oddly I've found her rather hammy in later stage appearances (before she became an amazingly ineffective MP).

I haven't seen Lisztomania so can't comment on it but presenting Liszt as the equivalent of an OTT modern rock star seemed a valid statement to make at the time.

The horrid Devils has horrid music by horrid Maxwell Davies as well. Essential viewing imho, even if from behind the sofa at times.

Sir Max also did the music for The Boyfriend (!)

The sad news arrived also in Japan. Ken Russell's name has been very special for me since I saw his early TV movie "Song of Summer" (BBC, 1968) broadcast in Japan in 1970. Unlike his other extravagant biopics, this film is strictly based on the biographical facts and has genuine touch and serene atmosphere. I love it.

I will visit London next January to see its screening at RFH celebrating Frederick Delius' 150th birthday. Of course, I will not miss LPO's Prokofiev Festival!

Good to hear from you, Shin-ichi, and looking forward to seeing you at the Southbank. I hope we can do Delius as proud as the LPO and Jurowski are doing Prokofiev in January. We did have a tremendous BBCSO performance of The Song of the High Hills last season, but not much since.

I'm ashamed to say I've never seen the Delius film, which is generally reckoned to be among KR's early masterpieces. Perhaps I can rectify that at the RFH.

Howard - PMD arranged Sandy Wilson's score - and practically composed the nightmare-dream sequence. I have a cassette somewhere recorded off the radio of Rattle and the London Sinfonietta performing it.

Never saw the film but always remember the bridal couple at one of my mother's goddaughters' wedding - a very short-lived one - getting a copy of the LP. I must have been about ten and was intrigued by the artwork/film stills. Twiggy (bizarrely paired in the movie with Christopher Gable) spoke with her usual verve and naturalness about Ken on the radio a couple of days ago.