Three church visits and a sermon 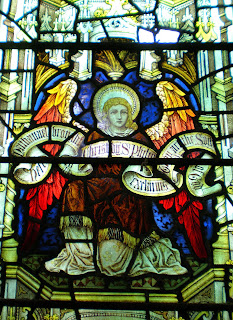 Well, that's just about it: one and a half seasonal events over the past week or so - not counting panto and ballet, of course - and a third setting-foot inside a church for a bit of peace and quiet. Events first: the Maytree fundraiser in St Botolph's Aldgate included several eloquent, touching speeches from those wonderful people involved with the 'sanctuary for the suicidal'; vivid readings including an evocation of Mole's makeshift good cheer from The Wind in the Willows, John Julius Norwich's now-familiar take on The Twelve Days of Christmas - always worth hearing when delivered as well as this - and U A Fanthorpe poems beautifully read by Adjoa Andoh; and the handbells - ah, those handbells! Such a surprisingly dulcet art, especially when applied to the little wisdom of Papageno and Pamina in the Act 1 finale of The Magic Flute. And on Sunday after birthday revels for two-year-old Mirabel, we went round the corner with her ma and friends to St Leonard's Shoreditch. 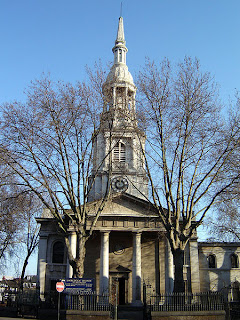 That's right, 'as seen on TV' in the gently charming and ever so slightly subversive Rev.. The carols-by-candlelight event was packed, and mostly with young folk from the arty-bohemian vicinity - but no mocking renditions of 'Jerusalem' (if you've seen the humiliating Midnight Mass episode of Rev., you'll know what I mean). 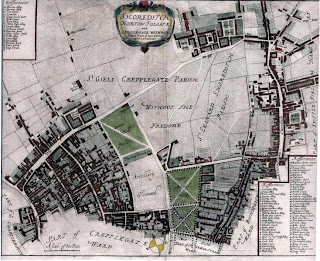 And there may have been a sermonish speech from St Leonard's own laidback Rev., but I blush to say we didn't have a chance to find out since we left our money in the plate and exited halfway through, as intended, for a more profane supper up in Highbury. The sermon I've taken for the season was this. 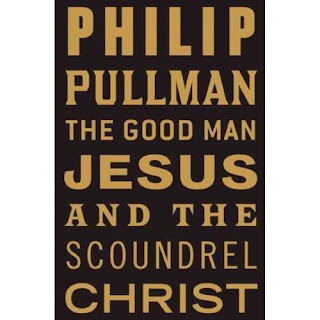 Pullman's central conceit is of two brothers, one of whom is hellbent, if you'll pardon the expression, on making his sibling's not entirely good but always human words and deeds - glad Pullman doesn't go soft on the angry, militant side of Jesus - sexier for posterity. Interestingly, Jesus's most extended speech, in Gethsemane, isn't overheard by brother Christ but, of course, related by the narrator - and it distils the very simple message of this alternative story: 'as soon as men who believe they're doing God's will get hold of power, whether it's in a household or a village or in Jerusalem or in Rome itself, the devil enters into them'. As for the death of Jesus and the resurrection of Christ - well, that's a punchline I realise I may have given away. It's clever and rings true enough for me but still feels somehow a little undernourishing. Tuesday's church visit was made spontaneously during a visit to the ma-in-law down in Rye. I always like to do a circuit of the cobbled streets up the hill, and no matter the time of year the 'square' - more a graveyard with houses around it - at the top is quite a sanctuary. But I'm not sure I've been inside St Mary's since I was a child. Its size is surprising, with the Clare Chapel to your left as you enter and Norman remains embedded in the North Transept. 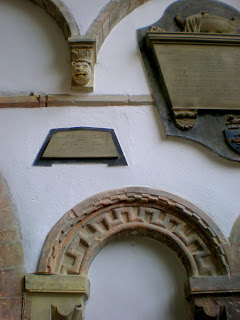 The glass is all Victorian and 20th century, but I'm developing a fondness for those later angels like the one up top (Kempe, 1896, I think). A Burne Jones design executed by William Morris & Co is dismissed by Nairn and Pevsner with one word - 'sentimental' - but it's characteristic. 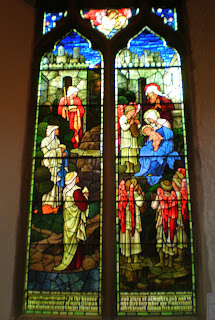 I do like the big windows local literary hero E F Benson had dedicated in the late 1920s and early '30s to family members: at the east end to his parents - J's just read a book about the very remarkable mother - and in the south transept (finest of all but too dark to capture) to brother A C of 'Land of Hope and Glory' fame. The nativity of 1933 is slightly twee but colourful. 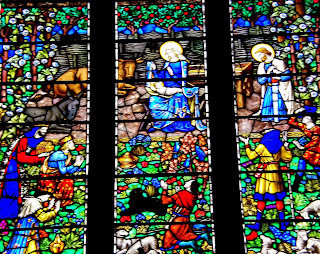 And I suppose one of the original Quarter Boys whose fibreglass replicas stand either side of the clock outside will serve as suitably seasonal cherubic ambassador of good will to all readers. 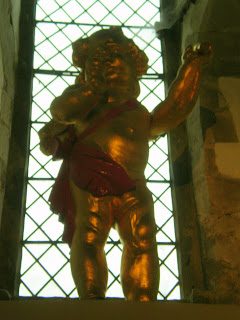 Compared to your holiday time ventures, it seems that mine (aside from going to one of New York City's endless stream of Messiahs--is it necessary for music programming to be so incredibly unimaginative this time of year??) were quite secular. It does seem, book included, that you managed to find a treasure-trove of interesting places to go and things to do for the season. Happy holidays, and onward now, headlong, to the new year!

PS: following your link, I am reminded of a definite "small world" moment, for this season brought us gift certificates for Cressida Bell's!

Thought I'd hold my tongue here for a bit, Sue - it's been a needs-must hunker-down time. Always happy to hear about the seasonal Big Apple, though. You'd think me even more ecclesiastically minded (pure coincidence) if I say we also caught the big St Paul's service, courtesy of our pal in the cathedral. Spectacularly good anthems and carols from the choir. The big organ-chord wrench of Tavener's 'God is with us' never fails to shock. Nice Rodney Bennett setting of a curious Herrick poem, too.

Hi David - happy New Year. Catching up late (as ever) with your blog, I noticed your comments about Philip Pullman's book (resolution number umpteen for 2012, read it!). Have you read Jose Saramago's The Gospel According to Jesus Christ? It strikes me that 'out there' there are plenty other books written before Pullman's and taking somewhat similar approaches, but Pullman's seems to have 'caught the zeitgeist' in a way the earlier ones did not.

Likewise, Catriona. Saramago is a wonderful writer and was a great human being. Blindness is a masterpiece, and I enjoyed dipping into his published blog, wondering at the flexibility of mind and the savage indignation he preserved into old age. His Gospel is one I haven't read, but I know the premise. I think I intimated that I found the Pullman fell just a bit short of its premise/promise.