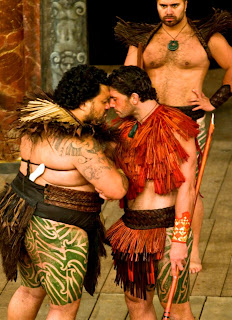 With 38 theatre companies and as many languages descending on the Wooden O across the next six weeks, the least I thought I could do was to make a long-overdue theatrical outing and honour the Globe to Globe Shakespeare marathon at the earliest opportunity. I missed the opening, an evidently enchanting dramatization of Venus and Adonis by South Africa’s Isango Ensemble, but I hied me thither to catch the next event, an extraordinary Troilus and Cressida from the Maori company Ngakau Toa directed by Rachel House (production photo above by Simon Annand for Shakespeare’s Globe; shot below featuring Kimo Houltham’s Troilus/Toroihi and Awhina Rose Henare-Ashby’s Cressida/Kahira from the team’s admirable website). For a more detailed appraisal of the individual performances than I’m about to give, read my colleague Matt Wolf’s eulogy on The Arts Desk.

The overall look and sound of it will never be forgotten. Here were warriors to the life, acting out Shakespeare’s singular and troubling interpretation of episodes from the later stages of the Trojan war with incredible vigour, all feathers, bare chests and tattooed buttocks and thighs. They started with a traditional Maori Haka or war cry to the Prologue’s ‘In Troy [for which read Aeotearoa], there lies the scene’ - a ritual now on YouTube courtesy of a little Telegraph film -


and there was an impromptu response at the end, too, as our neighbour-groundlings responded with their own earth-shaking tribute. At last we understood just how many audience members had been getting the verbal as well as the physical jokes; the Maori community in London must have joined the actors’ devoted fans from New Zealand.

All this was visceral, goosebump-raising and subtly complemented throughout the play itself by the refined, often spooky taonga puoro musicmaking of participant James Webster. Maybe the action itself came across as a bit too robust to suggest a war that’s been dragging on for years; there was little sense of the ‘botchy core’ eating away at notions of valour and love, though I liked the changes rung by an impish female Thersites (the chameleonic Juanita Hepi). But one big plus was that the fight scenes, which are usually the point at which even the best of British productions buckle a bit, provided a fitting climax, even if the horror of Hector’s ignoble death at the hands of Achilles’s Myrmidons went for little.

One crucial accompanying element came as a bit of a shock. The digital panels either side of the stage gave us not a line of Shakespeare in the original, only the baldest of scene-summaries. So the Bard’s flights of fancy and disgust had to be semaphored at best, the war-council speeches – and I was alarmed to find how much of them I’d forgotten since a time when I knew the play well – passed us largely by, and identification of the warriors on both sides was even harder than usual (an opportunity missed by the supertitling in the early parade of Trojans, duly compared to big up Troilus in Cressida’s eyes by Rawiri Paratene’s authoritatively seedy Pandarus). Certainly words to the effect ‘Pandarus brings Troilus and Cressida  together’ were no substitute for the poetry in that initially tentative love-scene. So the language, except for those who understood the impressive Maori translation, was the biggest casualty. I wonder if the same opacity is to dog, say, the Serbian/Albanian/Macedonian Henry VI three parter? 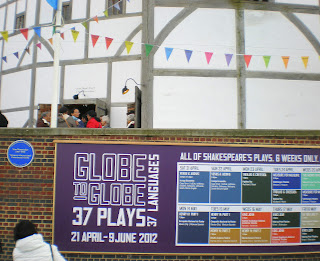 Yet it has to be said that the audience went with the general sense of it all; the groundling zone remained as busy after the interval as it had been during the first half. As far as I could judge, this was the most compellingly-realised Troilus of the ones I’ve seen since Howard Davies’s Crimean War version many years ago, with Juliet Stevenson as an against-the-grain Cressida so shockingly bartered and traduced. The unique atmosphere of the whole will resonate in the memory long beyond any of those quibbles.

Full details of the Globe to Globe extravaganza here.
Posted by David at 14:36

I was there and though I loved it too, I found the lack of translations a problem. If this is going to continue, I'm not sure how many of these I'll be going to.

Agreed, James: without them it's a bit like the bones without the meat. I suppose every word would have the spectators' eyes glued too much to the screens, but a bit more suggestion of each speech would have been welcome.

This stupendous series of performances is far more than a demonstration that Shakespeare's plays are "popular". He writes about the human predicament and it is one punch after another. Almost every line in some parts. Seeing the plays as other cultures see them must be amazing. I would like to see Macbeth since I know most of the lines after playing Duncan - or maybe not? Better to only know the outline? Rather like listening to the music at an opera without looking at the surtitles?

My sister who was NOT academic discovered Shakespeare late in life and suddenly wrote to me saying how tremendous she found the plays. ( Maybe she was assisted by her acting skills - one of her successes was as Sam Goldwyn - don't ask me how)

Note: Shakespeare was written by Shakespeare. In the long period he was acting etc in London it was impossible in that gossipy ( and not very large ) world that Bacon or Oxford or whoever could be writing the plays surreptitiously

I agree on Shakespeare written by Shakespeare. Though when the language is not always first-rate, as in Pericles, I wonder. And did you see that a scholar has found word-thumbprinting to indicate that Middleton had a hand in All's Well That Ends Well?

Troilus, though, is Shakespeare at his most daring throughout.

The feat of co-ordination is in itself stupendous. I didn't realise that many of these productions were conceived from scratch especially for the Globe.

I should have added that according to what I remember from school, a few of the plays were written by Shakespeare in greater or lesser cooperation with others. I think ( it was a long time ago and no doubt scholarship has moved on)that Henry VIII was especially mentioned. No doubt from time to time he recruited someone to help, especially if a deadline approached, but that would have been known and does not take away from Shakespeare as the author of the greater part of the plays

How magnificent this sounds to have been--and indeed the whole series seems truly inspired. I second David Damant's point that "seeing the plays as other cultures see them must be amazing." How lucky you were to get there, and how glad I am you reported back. The "earth-shaking tribute" at the end must have been thrilling, too. Do you think there is a chance any of this will become available on DVD?

Well, there have been film crews at each of the three productions I've seen to date. And it would be impossible to say which was the best. I've now chalked up the Swahili Merry Wives of Windsor (Nairobi) and a joyous Hindi-musical Twelfth Night: one review up on The Arts Desk, one still to come.

Just found this link to YouTube - a news item on Maori TV which has little snippets of the 'choreography' to give you some idea.

There is hope then! Hooray! The Edu-mate is suitably chuffed—Shakespeare her stock in trade (she denies such wide-ranging expertise, of course). The Youtube a lovely little taste, and your colleague's Arts Desk review, which I've now had a chance to read with focus, demonstrates so well the excitement of being there. You lucky fellow: a Hindi-musical Twelfth Night & Swahili Merry Wives of Windsor. Such a wonderful, wonderful project this is!

PS - I've just found the opening sequence in a Telegraph film-ette on YouTube and embedded it in the text.

This is spectacular. How lucky you were to be there--though this does seem promising for an eventual DVD (just hope it is also formatted for this side of the pond).

This sounds just wonderful, David - and just seen your write-ups on The Arts Desk (welcome back there too). Looking forward to news of more.

Yes, Sue and Katherine, it's been wonderful - and now I'm working out how to get to more.