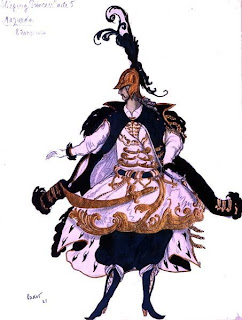 What’s the vaguely seasonal listening here at home? Bach cantatas, not necessarily tied to the time of year, an always inexhaustible treasury; G&S, thanks to a fellow blogger who may wish to remain anonymous since he dug out some hard-to-find Mackerras radio recordings, including Princess Ida with Valerie Masterson as the heroine and Philip Langridge as Hilarion; and Tchaikovsky ballets, as ever.

I feel I’ve not exhausted the musical strain in my earlier bracketing of Bourne’s and Järvi’s Sleeping Beauties. It seemed only fair to return to Petipa since the New Adventures version had to jettison so much of my desert island Tchaikovsky, in other words most of the fairy-tale homages at Aurora’s wedding. Some earlier fantasy designs featuring high-camp courtiers and animals present themselves online in Bakst’s far from moribund later imaginings for Diaghilev’s surprising 1921 extravaganza. Quite where the Indians, Chinese and blackamoors fit in I’m not sure, but at least we get proper animal heads for Puss in Boots, a passage Bourne ingeniously reinterpreted 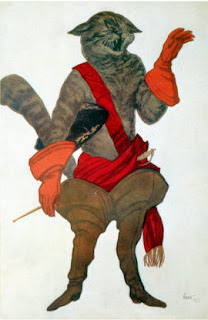 and Red Riding Hood’s Wolf, part of a character number not in the Bourne vampire ball. 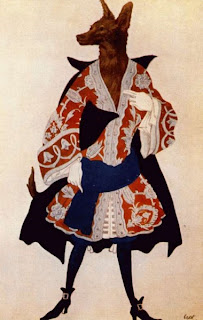 Poorly filmed though it is, I thought the following link to a strand of the Kirov/Mariinsky’s 1890 reconstruction was worth including because you won’t have heard any of these three numbers in the Bourne version. In the case of the Cinderella/Prince ‘supplementary' as well as the fabulously imaginative Tom Thumb ‘Pas berrichon’, they might not even be on your ‘complete’ recording, and probably not in any recent Royal Ballet production you've seen. YouTube embedding isn't, apparently, allowed but click here to view the sequence. If you want to see the Bourne-absent Bluebird sequence, you can go back to the previous slice.

It seems criminal that the kids-and-ogre routine has been sliced off two CD transfers in order to cram the ballet on to two discs (a feat which Järvi achieves with no cuts but some very fast speeds). This, after all, is the number which a colleague of the young Shostakovich at the Leningrad Conservatoire remembers them both especially admiring for the way in which ‘the theme is broken up and scattered amongst various instruments at wide intervals of the register’. No Bakst designs for that number, nor for the Bluebird, but here's the legendary Enrico Cecchetti with his Florine in 1890. 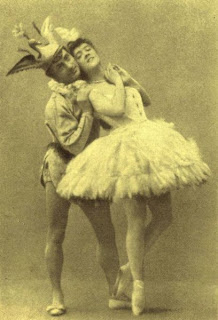 Now for a more extended slice of magic, which Bourne did include closer to its entirety than any other choreographer whose work I've seen - the Entr'acte Symphonique 'Le Sommeil', mentioned in the previous Beauty blogslice with copyright discovery of its string tremolo lasting 100 bars. You can check for yourself in the piano score which accompanies it here, and go on if you will to some of the dances in Act III. Of these, Bourne included only the Polacca, aforementioned Puss and, with special percipience, the 5/4 Sapphire Fairy variation last featured in the wacky Björnson-designed Royal Ballet Beauty. I fear the volume levels may be a bit low, and the first two bars of high violin tremolo aren't there, but the Concertgebouw/Dorati recording is an interesting choice,

As for New Adventures absences, you can't miss them for too long in that mostly wonderful show; unless you’re impossibly Petipa-purist (and heaven knows that master fiddled around with the original score himself), its storytelling ingenuity will be bound to win you over. 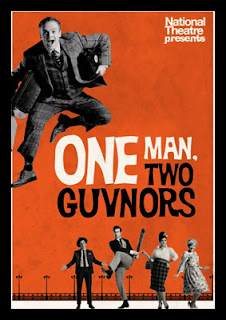 May it run as long as a show we should have seen long ago, but somehow never did – One Man, Two Guvnors, Richard Bean’s updating of Goldoni to 1963. In the mood for froth, J picked up two half-price tickets on Thursday, so off we went to the Theatre Royal Haymarket to see how the highly-praised Owain Arthur acquitted himself in the James Corden Truffaldino-ish servant role. I have no comparison to make, but Corden's one-time understudy charmed us even as we sat somewhat nervously on the end of the second stalls row, wondering whether we’d be the next audience participants implicated in the stage mayhem.

As it turned out…well, I won’t spoil the fun, but this is the perfect seasonal treat since it's as close to panto as you can get if you dislike the genre. I was reconverted last year with the Wimbledon Dick Whittington starring Dame Edna Everage, who was wonderful but by no means the only onstage laughter-maker. Likewise Arthur, given exuberant turns from Jodie Prenger as our main man's feisty sex interest (pictured below in the second of two Haymarket production photos by Johan Persson), Daniel Ings as a posturing thesp, Ben Mansfield as arf-arf Stanley Stubbers, Rhona Croker’s dumb blonde and Gemma Whelan excellent in a revival of Vesta Tilly-style male impersonation. 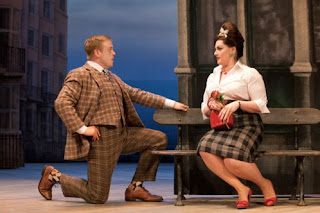 We were also apparently fortunate to be rewarded with the return of the original, award-winning deaf old waiter Alfie, Tom Edden (pictured below by Alastair Muir) in the ever more hysterical slapstick climax of the first half. His walk across the stage with a rattling tray was a consummate comedy turn in itself. 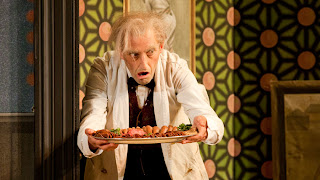 The warm-up skiffle band and the vaudeville musical numbers by various members of the cast added to the simple but uproarious pleasures of the evening.

After the Boheme and Robert le Diable plunges, we’ve been lucky in our catching-up going-out, culminating in as classy and dramatically varied a Handel Messiah as I expect to see and hear at St John’s last night – Arts Desk review (probably the last for a while) here. It’s been a delight to have flying visits from dear friends overseas, encompassing two goddaughters and a godson (our adored Lottie came to London as a member of the Zurich Opera Dutchman chorus, and the Buma-Hills-es, over from Amsterdam, met us for dim sum today).

We’ve enough reading to keep us happy in the quiet spells between the socialising: I’m working my way through Sondheim’s Finishing the Hat, a Christmas present two years ago but only sampled until now, wondering at his highly critical masterclass in the art of lyric(s) writing, and Ulitskaya continues to amaze in an affirmative tale about Russians gathered round a dying friend in a New York attic, The Funeral Party (with the stress decidedly on the ‘party’). Season’s greetings to any readers who are still dropping by at this quiet time.
Posted by David at 21:38

Rain here all day, floods around the country, nursing phlegmy cold but warm and cosy with good company, food and entertainments. Send Canada our seasonal best wishes (and did you open 'It's a Jib Jab Life'?)

Hopping by belatedly to send warm holiday greetings. Thoroughly enjoyed your jibjab card! Head colds seem to be a transatlantic phenomenon right at the moment, & certainly here an occupational hazard for the Edu-Mate & therefor me, too. So I have extra reason to thank you for all the reading suggestions: finished DQ (though that definitely requires another read, at least I have the broad strokes of it at last), then 15 Journeys, all the more affecting with its straightforward prose, and now on to A Change of Climate, which I am enjoying immensely. We, too, have been listening to the Bach Cantatas, as well as Britten's Ceremony of Carols. To a happy, healthy New Year for all!

I lined up what I thought might be an Xmas afternoon film treat, having picked up a copy of Kozintsev's Don Quixote (made before his mighty Hamlet and King Lear). Rude noises were made, but the consensus was that it made an utterly charming job of the Knight (played by Alexey Cherkassov of Nevsky and Ivan the Terrible fame) and his squire. Of course it doesn't have many of one's favourite episodes, but the gist is there.

And I think I've hit on my book of the year, having finished Ulitskaya's The Funeral Party. So small in length, so big in human scope and warmth.

Anyway, it's warming to get a surprise visit when I thought you were on sabbatical from the time-wasting net...