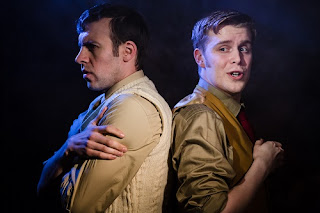 Well, not quite - I don't think it's a spoiler if I say that no-one in Road Show gets killed, but there are slow deaths of the soul involved - quite quick ones, actually, done with the master's usual succinct virtuosity, since this is a (long) one-act distillation of what started life as Wise Guys in 1998, became Bounce in 2003 and ended up in its present form five years later. Don't know how I missed the UK premiere at the Menier Chocolate Factory in 2011, and only heard of this Union Theatre staging in time thanks to a punter commenting on my Arts Desk review of Chabrier's L'Étoile at the Royal Opera (his gist was that the Union evening turned out wittier and all the more effective for being done imaginatively on a low budget, and he turned out to be right). All production photos here by Scott Rylander.

Anyway, the show smacks neatly of so many American myths - the Cain and Abel aspect of Steinbeck's East of Eden, the get-rich-quick side of Brecht and Weill's Mahagonny and the schizoid relationship of their two sisters journeying through America to make money in The Seven Deadly Sins, not to mention its feeling at times like the third in a chamberish trilogy by Sondheim himself (Pacific Overtures and the IMO much stronger Assassins being the first two instalments).  Needless to say, the real-estate aspect is the most pertinent, as a clever final tableau at the Union underlines. 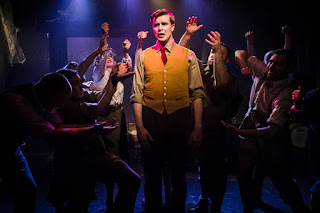 The two facets of the same personality are to be found in Sondheim's and John Weidman's portrayal of real-life Wilson and Addison Mizner, jumpers on the bandwagon of the new (20th) century. Wilson is the brilliant short-hauler, the doer whose plans never come to proper fruition (brilliantly captured in the ensemble number 'That was a year'). Addison has a run of bad luck to start with - comparable treatment in 'Addison's Trip', pictured above, encapsulating two years' of world wanderings - but builds on his mistakes. Quite literally, in his dubious success with serving up the rich villas in hotchpotch styles in Palm Beach. He, at least, doesn't pretend or falsify; but when Wilson comes back fatally into the picture to develop a Mahagonny at Boca Raton (that delightfully hooey fantasy sequence pictured below), it all goes decisively pear-shaped for the last time. 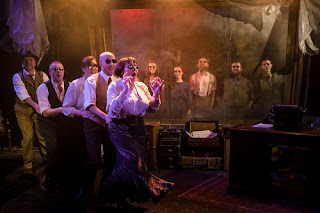 All this is economically staged, with slightly irritating invisible props, by Phil Willmott, whose Lear with Ursula Mohan at the Union I so admired, and the entire company struts its thoroughly professional stuff very well indeed in the tiny space. But what makes this an unforgettable evening is the superb casting of the four main roles. You can tell that huggable Howard Jenkins (pictured up top on the right with Andre Refig) is keeping his Broadway belt in check to suggest the sensitivity of gay Addy, and when he does explode towards the end, it's spine-tingling (I can't tell if the music is up to the mark here, but the performance absolutely is). Refig's Wilson might arguably be a mite more charming, but we do get to see his vulnerability. 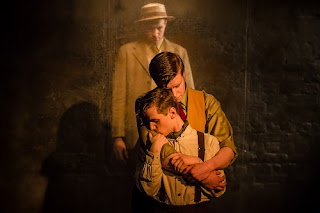 Joshua LeClair (pictured above with Jenkins and Refig) is spirited as the poor little rich kid Hollis whose dreams of an artists' colony are doomed along with his reciprocated love for Addy. This is a first for Sondheim, a mutual gay declaration of [You're] 'The Best Thing That Ever Has Happened To Me' that doesn't make a fuss about itself - the relationship just is, even it's bound to be destroyed by Wilson. Cathryn Sherman's Mama Meisner is so good and true that I had to wonder why I didn't know this singer-actress. 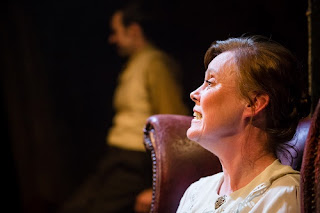 Her 'Isn't He Something' is the nearest Road Show gets to deeply moving. But it's always effective, and the contrast between American dreams and the shoddy reality is typically strong. Even middle-range Sondheim is better, in the way the lyrics so effortlessly fit the tunes, than any musical by anyone else currently operating, at least that I've seen (the hit-and-miss Grey Gardens, for example). Fabulous musical underpinning, too, by MC/pianist Richard Baker, violinist Katt Robb and percussionist Richard Burden - and look, no miking (except behind the mirror). I'd like some company to perform all three (or four) versions of this experiment that Sondheim never lost faith in, but in the meantime catch the Union's Road Show if you can, and if/while there are still tickets - not easy to come by in this lovably miniscule venue. It's on until 5 March. In the meantime, I've bought the Nonesuch recording, and perhaps I ought to invest in Bounce as well.
Posted by David at 14:41

I love that you went to this on a prompt from someone commenting at TAD. You know, I somehow missed or had forgotten that John Weidman wrote books for Sondheim. A New York bit if trivia: he lives in my building there. Sondheim is a national treasure, to be sure.

When anyone I trust says 'you must see...' I try to move hell and high water to go. Though in this case I didn't need much encouragement, as I needed to tick off Road Show and wasn't expecting it to be as good a work as it was. Three of us have just come back from an excellent production of Peter Shaffer's 1958 family drama Five-Finger Exercise, this time on the recommendation of Richard Jones, no less, though I need to quiz him on the reason he gave. But I'm very glad I saw it, as I wouldn't have thought of going otherwise.

Don't know much about Weidman, must investigare. Volume Two of Sondheim's extensive examination of his lyrics, Look, I Made a Hat, devotes over 100 pages to the whole drama. So I look forward to reading that.

Enjoyed your very articulate review. The Union must be thrilled.

It’s not a piece I rate (or like) and I go as far back with it as Bounce in Washington when I was still doing Stage & Screen. The problem for me is the sheer length of gestation in that it smacks of whatever Sondheim was writing at the various stages of its development. It feels second-hand. Sondheim and Weidman should have just let it go - indeed Weidman told me that it was Sondheim who couldn’t.

Excellent to have your opinion, Ed. It all sounds fairly consistent to me, as middle-range Sondheim, at least, and always very much him since the imitators tend to botch it. But I think you might have succumbed to the charm of the main performers here.