Two men and their sheep 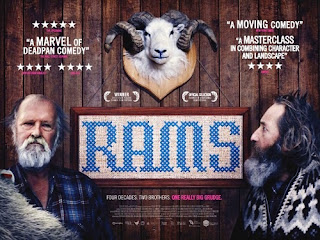 Now this is just perfection, and I'm worried that news about it hasn't reached a wide readership (certainly The Arts Desk didn't carry a review, which will have to wait now until DVD release). 'I bet you could identify with that,' a friend remarked ironically yesterday when I told him we'd been to see Rams (Hrútar), Grímur Hákonarson's film about two Icelandic brothers who haven't spoke to each other for 40 years and find themselves caught up in a scrapie crisis affecting both their herds. 'Well, the funny thing is that we did, totally,' I responded, going on to say that what connects us with country folk in remote north Iceland is, on this evidence, far stronger than what's different. It also reminds me of what James Rebanks writes in A Shepherd's Life about the traditional Lake District farmers' relationships with their sheep (minds out of the gutter, please). 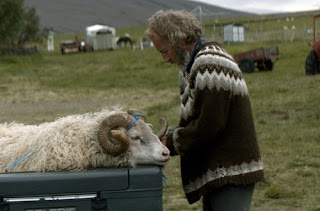 I need no persuading about the quiet tenacity and dignity of those people who inhabit one of the weirdest, most wonderful countries in the world, not least their strong social connections: even in this isolated community, the contest for the best ram includes poetry and singing along to the accordion, as well as convivial Sunday lunches together, and there's always an accident and emergency unit in the nearby hospital (in Akuyeri?) to rescue the drunken brother who's passed out yet again in the snow when his sibling, having scooped him up in his tractor claw, dumps him right outside the entrance.

It's the sheer humanity of the film, even when it involves family feuding, which shines through at every point. Much of it is conveyed through the tragic face of  Sigurður Sigurjónsson's Gummi, placed in a series of bleak but beautiful compositions - at home, in the fields, in the sheep shed, in relation to brother Kiddi (Theodór Júlíusson), on the left in the poster up top. 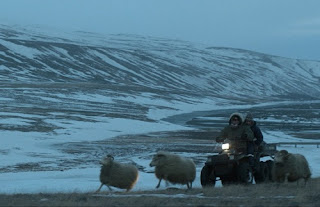 As the plot's twists were fresh to me, I won't spoil them for others. Let's just say that so much human life is here in one Icelandic valley, with laughter and tears in close succession - as well as a dramatic moment that made me shriek, to the amusement of the few other people in the cinema - and the story is told with the mythic power that also informs comparable African gems like Yaaba, Tilai and Timbuktu, though the emotional complexity here is perhaps stronger.Still, the outlines of Rams wouldn't be out of place in one of the old Icelandic sagas. What is it? Tragicomedy? I'd prefer the term 'human comedy', since it's all plausible even at its most bizarre.

The music, mostly for accordion and organ, is well-placed and suitably austere. Of course, the daft thing is that at BAFTAs and Oscars, had it been lucky or simply noticed, this film would have been jammed in the foreign language category - what little I could bear to watch of the BAFTA winner, Wild Tales, made me want to vomit, violence without a context, so we switched off the DVD after the second 'tale' - whereas it should be there in the best film category, period; but don't get me started on the stupidity of these awards ceremonies. Rams has no kind of fault or flaw in my reckoning (J thought perhaps some of the images could have been sharper, but I wasn't sure that was a drawback). Total masterpiece, in other words. See it.
Posted by David at 23:12

The trouble with it all, though, is that I am now spending my life trying to convince uninitiated friends (especially those who also watch the new Nordic noir on BBC4, Saturdays) that Icelanders do things other than grow beards and chase creatures in blizzards..

Hilla elskling (I can't do the Icelandic, so Swedish will have to do), what welcome comments. I can well imagine that repeated viewing only intensifies the film's mastery.

Well, the Swedes and Danes have to convince people that their countries are not especially murder-ridden in the wake of The Killing and The Bridge, so this stereotyping - no fault of the film, which simply presents one aspect of Icelandic life - is hardly surprising. The corrective is that they also watch the rather good Reykjavik 101 with a couple of my favourite Icelandic actors in it.

Will look out for this on dvd. The bleak Icelandic sitcom 'The Night Shift' was on BBC4 a few years ago. It's terrific, and most of the episodes are on youtube.

I hadn't seen any of 'The Night Shift' until last night - seem to have started with the wrong series' episode one, but that didn't matter: the surreal consequences of the dozy worker convinced by a medium that he was a grand chess master in a previous life who'd raped his present boss in that incarnation, which explained why they didn't get on, were inspired.

Jón Gnarr, the undisputed star who plays the boss harping on his past success as a university graduate from Lund, is a total hoot. We met him when he was Mayor of Reykjavík on the day of the opening of Harpa in Höfði, the famous house where Gorbachev had met with Reagan for the 1986 Reykjavík Summit. I love it that this father of five joined in Gay Pride in drag. Gnarr's Wiki entry is fun. By the way, he has his own head of hair; I don't quite know how he managed that look for The Night Shift without either a stunningly effective skullcap or having shaved his head for the purpose...

PS - one black mark for Gnarr, pointed out to me by J: he doesn't seem to think the EU matters.

I can't wait to see this; just my kind of movie. So glad you noted it, and will definitely keep my eye out (of course, you may, as you did with Importance, alert me that it is my way already, if I had but noticed it--and BTW, our tix for Importance were in the mail when we arrived back home today--hooray!).

I'm sure it must be on somewhere in New York, but I don't know the 'scene'. Were its widescreen landscapes not so important, I'd say wait for the DVD, but this is one for a generous-sized cinema. Hooray for Importance - you won't regret it.

RAMS is one film I really want to see. There was another I read about a few years ago but haven't seen, about a flock of sheep being walked from one place to another - 20th century transhumance in somewhere like Wyoming or Montana. Problem is (confession time), I'd be more interested in the sheep than the cinematography. Watching Michael Wood's The Story of China last night, I was deeply frustrated by the concentration on the humans in Kashgar market rather than the animals. Why does only David Attenborough put the beasties centre stage?

Well, the director did say that the sheep were more difficult to cast than the humans. And all the ovine darlings' names are listed in the credits. The idea of transhumance routes COULD make for an interesting film. There's a rather dramatic version of that in Rams, but I won't spoil the plot.

Beasties of course get the most hits online - though they're nearly always domesticated ones. I confess I often click and howl with laughter. Wasn't the panda rolling in the snow adorable?

That has to be one of the great clips of the year. S/he really didn't know what to do with itself, s/he was having such fun.
Anyhow, I'm off to see RAMS at Filmhouse sometime over this weekend, DV.

Good. Avoid A Bigger Splash whatever you do, though I can't imagine it would be high on your list. We only went because it was the only thing on yesterday afternoon, which both of us had taken off.

I saw RAMS yesterday. I started thinking of all the people I would recommend the film to, and then realised that I couldn't. This last week has seen the fifteenth anniversary of the big Foot and Mouth Disease outbreak and, to so many people who would otherwise have been moved by the film, the pain of the cull is still too raw.
Ultimately, however, the film left me feeling slightly dissatisfied. It may be the shepherd still in me, but I'm still worrying about what happened to the sheep and, of course, the dog. I was surprised that the dog didn't stay with the humans, which is well documented normal collie behaviour, so can only assume that the dog stayed with the sheep.

Yes, I just listened to a powerful retrospective on that grim anniversary on the World Service. Pain may be raw, but this is possibly cathartic, or not?

And we don't know, ahem, what happens to the two brothers either, do we? You sound a bit like Elgar, more concerned about the horses in the First World War than the men...

I had the feeling at the end that the brothers were in the safest place they could be in the circumstances, which is why I was less worried about them.
Will you forgive me?

Nothing to forgive, just pointing out that their survival was equally uncertain. Perhaps it was an abrupt end, though. The point, I think, was a grace and a forgiveness.

I loved David's review (as ever) but can I add that after about half an hour I leaned over to my niece and said "it's going to end with reconciliation between the two brothers over a sheep issue". I am not saying that 99 per cent of the review is not bang on, I just wanted to add that some might say it is very very slightly predictable.

Ah yes, dear Chris, but it's in the 'how' - and I bet you didn't predict that. I love it that the fates of the two brothers were open-ended, makes you think about them all the more once the film is over.