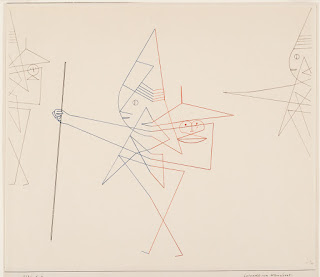 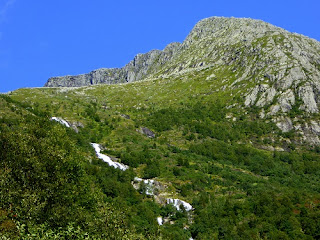 The top image is one that went straight to my heart, Paul Klee's Meditative Walking (1931) one of 15 works by Kandinsky and Klee on loan to the Rosendal Festival (full report here) by the endlessly resourceful KODE Art Museums of Bergen (my thanks to them for sending the image; credit to KODE and photographer Dag Fosse). A small exhibition, then, but a perfect one; on my last afternoon at Leif Ove Andsnes' festival, not realising that the Baroniet (Manor House) closed at 4pm, I was given special admission by a delightful young guide - we chatted about how big exhibitions could be overwhelming, and how you could spend time with each of the infallibly superb and ground breaking pictures here.

That afternoon was a wet one - I haven't often seen such persistent and heavy rain. So I was lucky that the day of my arrival, after a period apparently so cold and windy, with snow falling on the mountains, turned out so beautiful. 'When we get a day like this we're happy for a month,' said my taxi-driver on the way from a Bergen airport hotel to the landing stage for the passenger boat up the Stavangerfjorden, a journey which took us into high mountain territory. The glacier-capped range beneath which sit the small settlement and Baroniet swung into view as the most dramatic of all, waterfalls cascading down the mountainside. 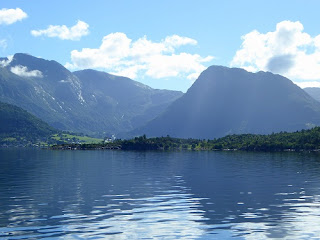 There were a few call-ins for single passengers, like this one just opposite Rosendal. 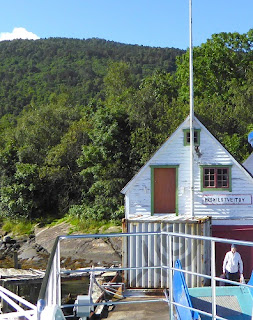 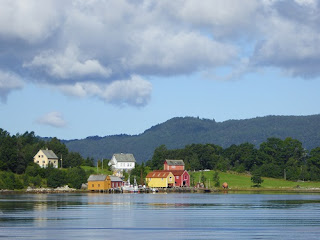 'Sorry you don't have a fjord view from your room,' they said at the charming Fjordhotel (deceptively big given the impression of intimacy), but this was no second best: Hattebergfossen (if this is still the waterfall you can see at lower level near Rosendal itself)  in full spate. 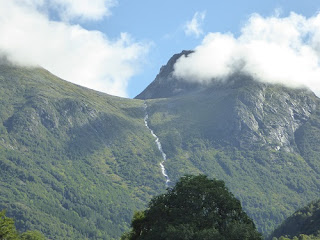 Simply the walk around a back lane to the Baroniet was beautiful enough, especially when it hit the river. 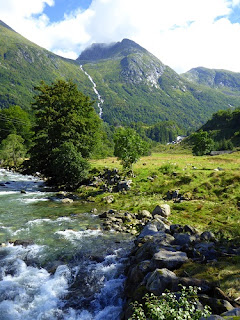 And the local giant, Malmangernuten, keeps you company past some lovely old houses, one with grass and this one with moss on the roof. 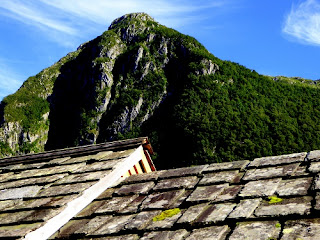 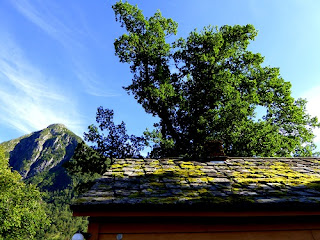 It also makes its presence felt to the south of the Baroniet and its beautiful rose garden. 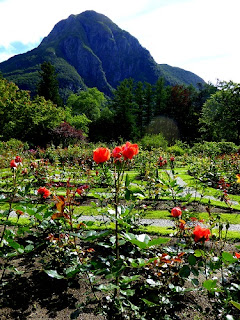 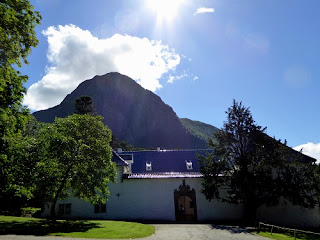 The roses are specifically Nordic-named varieties - Astrid Lindgren, which I think this is, 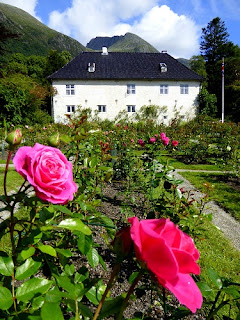 Ingrid Bergman and Carl Nielsen among them.

No less English in feel are the vegetable beds 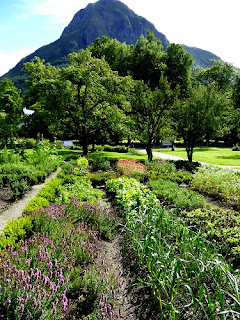 where these butterflies were sharing the leguminids with cabbage whites (could it be a cabbage green or yellow? Lepidopterists please advise. Update: friend Edsy has identified it as a brimstone). 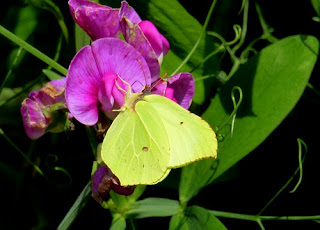 It was tempting just to linger around the grounds after a delicious lunch of local produce served in the greenhouse (I've written a bit about the history of the place and especially its chief 19th century owner over on the Arts Desk article). 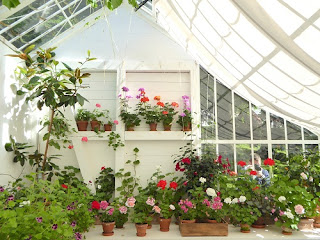 Couldn't miss the guided tour of the house, but then I needed to make the most of the afternoon before the first, evening, concert, spurred on by the knowledge that the weather would break by the following morning. So I simply headed up a small road climbing above the Baroniet, with good views down to the fjord 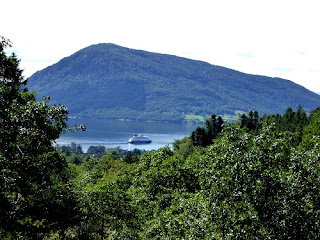 and what I think must be the higher reaches of the Hattebergfossen, framed by rowans, on the left, 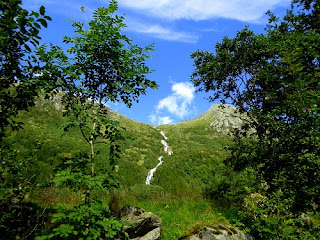 meeting - and this was to hold for the rest of the walk - only four people on their way down, two jolly Polish woman and lively children. They encouraged me to go on, where I'd reach a lovely green place (zelyony was the word I caught). So I arrived at this board which gave me the crucial map I didn't have, at the entrance to the high valley of Hatterbergsdalen where the road becomes a track. 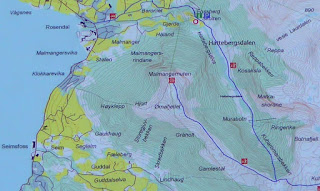 Handsome cows were grazing to the left 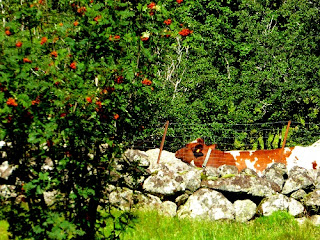 But what filled the air, alongside the rushing river 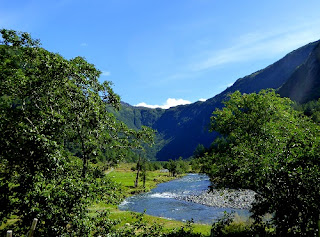 were the clanking of myriad sheepbells. 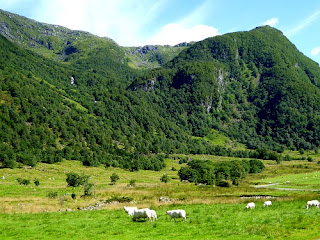 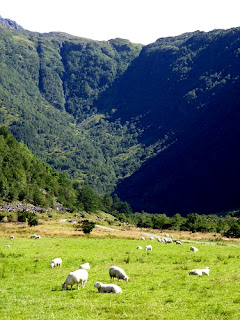 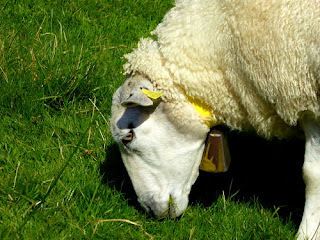 Like the Herdwicks of the Lake District, these sheep seemed unafraid, wandering up and staring curiously - most markedly so this very splendid black ram with a wet nose like a dog. 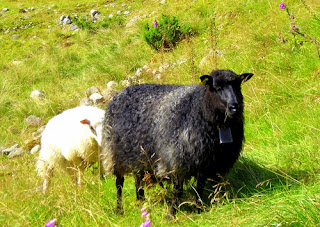 The path leads alongside the river, revealing more waterfalls round curves in the hillside and countless streams running down from them. 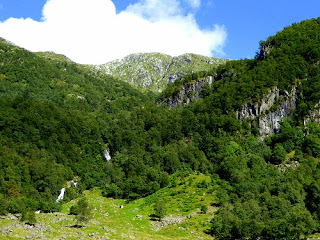 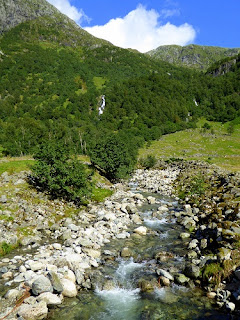 As time was pressing, I couldn't do the full circuit back via Malmanergruten, so reached this large mossy stone 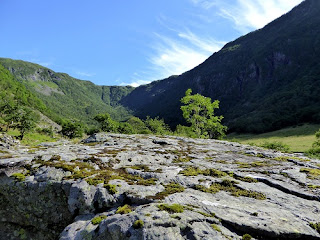 and turned back, handsome pines now to the right 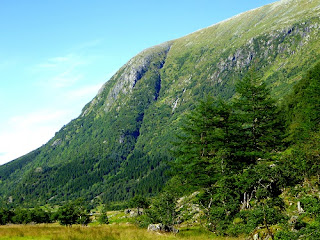 and cirrus patterns betokening a change of weather. 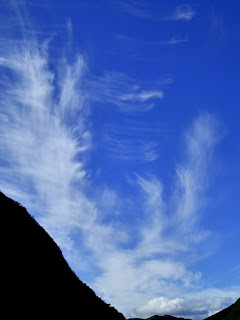 Then there was time to change and head back up the valley to the first recital. Which, of course, like most of the following day, equally good for the soul but mostly spent indoors, belongs to the Arts Desk feature.
Posted by David at 18:04

The Klee is a treasure, and so perfect for your post. What a blessing to be reminded how much beauty there is in the world.

Ditto re your Innisfree. Norway is one of the most beautiful countries in the world, but probably also the most expensive; shame a long holiday there - I'd love to hike in the mountains - couldn't be adequately funded.