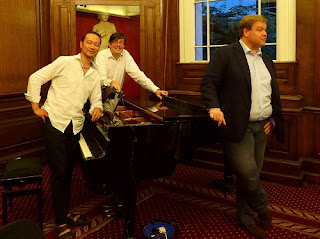 He mostly sings, of course - and this is his first Tristan year, making him for me the most convincing interpreter of the role I've ever seen on stage. I missed Vickers, of course,though his Act Three for Karajan is the only one in my opinion, and in our email exchange before the Wagner Society's evening on 21 July - Stuart answering questions in St Botolph's Church Hall at the end above, while pianist Kelvin Lim and I grin at the camera wielded by Jan Leigh - Stuart wrote back to my praise with the line that 'Vickers has always been, in so many ways, my hero, my example, my Vorbild'.

Anyway, how he can talk, too. The first half of our conversation focused on his role in the flawed but fitfully insightful ENO Tristan and Isolde (production images by Catherine Ashmore). Owing to transport meltdown - I should have gone on my bike, though I didn't want to turn up all sweaty on a hot evening -  I missed some of Stuart's preliminary chat about that production. What I did hear from him was how the video projection somehow changed according to how they were singing - voice-responsive, how fascinating. Shame the ubiquitous follow spot had to clash with it. 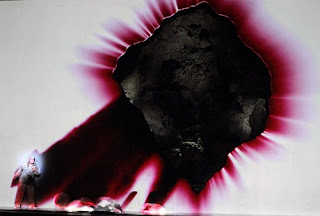 It was interesting to learn that the killer part is actually Siegfried, upon the altar of which/whom Stuart has no intention of sacrificing himself. Yes, emotionally Act Three of Tristan is the ne plus ultra, and you simply can't not give of yourself. But Wagner helps in the pacing of Act Three, those three amazing curves. You can afford to die vocally just as Tristan expels his last 'Isolde!', but not a minute sooner. (Below, with Heidi Melton in the ENO production). 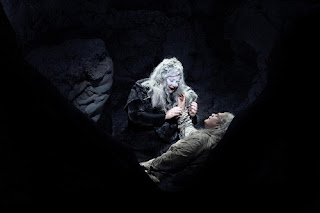 Act Two is if anything tougher (ENO helped with the big cut in the night-day dialogue before 'O sink hernieder').

Stuart talked about the feelings engendered as he lies there, curtain up or down, during the dark strings of the Act Three Prelude, an amazing experience; the pianist he brought along, the excellent Kelvin Lim, demonstrated it for us. That helps the Tristan to be in the right 'zone'. He hopes to keep the role in his repertoire for as long as his career lasts, though he won't be singing it in English again; that was a special favour to ENO as he knew it. Imagine the mind leapfrogging between languages throughout the year in a role like that. 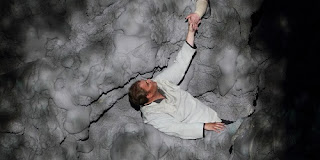 After the break, due to popular request, we discussed Stuart's career in the round, the amazing nurturing experience in Cincinnati and how timely everything seemed to be. Peter Grimes remains his touchstone role and informs everything else he does; Erik in The Flying Dutchman he could happily retire. Desert Island Discs? He listens almost exclusively to symphonic music; Celibidache's Bruckner 8 would be top of the list. Directors and conductors? He was discreet, but used the same phrase about those who haven't done their homework as Anne Evans had at the Frontline the previous week: 'when you hear the score crack, your heart sinks'. After two hours' chat, he boldly undertook to sing Siegmund's 'Winterstürme' to round it all off; Kelvin's playing suggested he could have gone on to give us Liszt's transcription of the Liebestod. 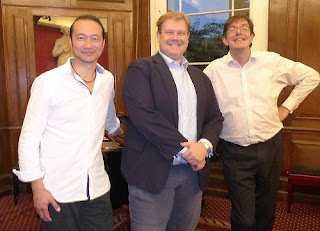 A very happy evening it was in the presence of a generous and very together top-rank artist. I've said it before, but these Wagner singers don't have the energy to spare for being dive/divi. That was born out by the four wonderful human beings I've had the privilege of interviewing over the past month or so - three Isoldes and, finally, a Tristan. I'm lucky.
Posted by David at 14:26

You've given us yet another set of personable and personal insights. Even without knowing why he does, I love that Peter Grimes is Skelton's touchstone role. Interesting, also, that he listens almost entirely to symphonic music, and C's Bruckner 8 tops his list. And my favorite comment, rounding out your report, is this: "these Wagner singers don't have the energy to spare for being dive/divi."

I found it especially fascinating, during the 'Brunch with Bruenhildes', that Sue Bullock and Catherine Foster spoke so much of the practicalities - when to drink water, how to limit it so that you wouldn't be taken with the need to pee at inconvenient moments, what to do in long breaks and even days in between when it came to Ring cycles.