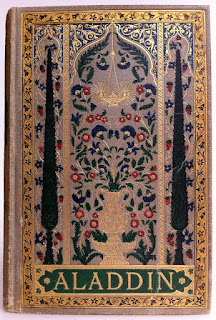 A non-Dane might well ask 'who?' So many national poets remain unfeted outside their homelands - Adam Mickiewicz, anyone? My own curiosity in Adam Oehlenschläger (1779-1850) has long been piqued by Nielsen's incidental music for his huge extravaganza Aladdin, as performed in a two-night version at Copenhagen's Royal Theatre in 1919. Here's a page of the manuscript for the violent final dance of the generous orchestral suite.

Paavo Järvi recently brought it to vivid life with his Estonian National Orchestra at the Pärnu Festival; having missed the superkitsch wordless chorus in that performance, I was delighted to find it - well, men, anyway - in a crazy performance by Paavo's temperamentally very different younger brother Kristjan* with other Estonians here:


And though that might have put you in the mood for something 'barbaric', it should be said that Oehlenschläger's drama is in a rather more gentle fantastical mode.The young Oehlenschläger was infatuated by the works of Goethe, the dedicatee - not just Faust but also, I'm convinced, a fantasy laden with  alchemical symbolism, the "Fairy Tale" which I read in an edition I picked up in San Francisco's City Lights, the publishers (I soon realised why - very trippy). That might explain why there are long scenes in Aladdin's Part Two featuring dialogues between Lympha and Zephyr, two elves and good versus wicked spirits. 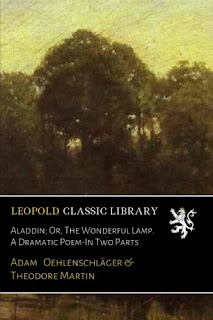 Oehlenschläger seems to know his prophets and the points of contact between the Bible and the Koran. There's an interesting analogy between baddie Nourabad leading Aladdin into the wild place where the gem-glittering, lamp-concealing caves are and the Abraham-and-Isaac story. Unusually, the poet also describes the 'subterranean garden' in a long, rhymed 'stage direction'. 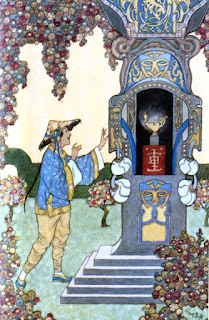 As the translator of my edition points out, there may also be correspondences between the poet's being in love and just having lost his mother (the scenes around Morgiana's death are certainly touching). 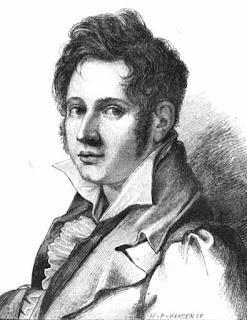 And yet, for all its peripheral magic, what an unedifying story: a handsome layabout gets everything without having had to work for it, loses it, and gets it back without having learnt anything, it seems, or paid any price. Maybe I'm being too moralistic, but I reckon that when a writer turns a bagatelle into an epic, there has to be more. Anyway, Nielsen's music never puts a foot wrong. You need to hear all of it, over an hour's worth, not just the suite, and there couldn't be a more characterful advocate than Gennady Rozhdestvensky conducting the Royal Stockholm Philharmonic Orchestra. 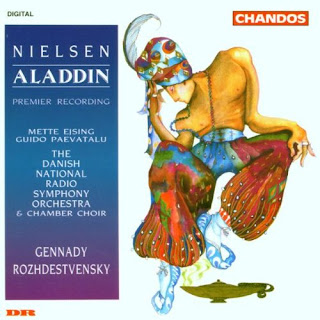 I'm also hoping that the final concert of the Pärnu Festival will be available on the radio and TV soon. In the meantime, here's a splendidly conducted if not exactly subtle performance of the Suite from a fine Turkish orchestra (note, please, the number of women in the orchestra, including a trombonist - this is progress too good to be derailed by a dictator). I first encountered Hakan Şensoy in an amazing Bach programme from the Istanbul Chamber Orchestra in the Anglican Church. He's a very friendly man, too - we have had a fine e-mail exchange.


*Father Neeme, by the way, is very proud of his younger son's achievement in getting the Baltic Sea Philharmonic to play the entire score of Stravinsky's Firebird ballet from memory. Though this is a fashion, it does seem to make a different to how orchestral musicians relate to each other and the music.

Oh you do like to lead me down paths of Itunes unrighteousness don't you??? Alexander Prior, a young Scottish conductor, who is a friend of a friend programmes Nielsen quite often in his concerts. He's with the Edmonton Symphony and I'm sure he's making sure the good citizens of that city are hearing from the Scandinavian masters.

Nielsen's Aladdin Suite should be a hit with everyone. Two young Latvians came with me to Pärnu: one was completely converted to classical music and has played a recording of the music over and over again. Any of the movements would make a perfect concert encore; which one would depend on whether you want to lower or increase the temperature. Good on young Mr Prior - Canada should take Nielsen to its heart.

Does "from memory" mean without scores? And is this really a fashion? Many conductors conduct without scores (it is said that that is why Karajan fell out of favour with Hitler, having made some mistake ) and some lovers of church music like my late mother cannot see the need for a conductor at all. But the musicians playing from memory ?? .........I can well understand that it " seems to make a difference ".....Most Puzzled.

Yes, without scores and from memory. It is - but audiences and players alike testify to the difference. For conductors and soloists it's a personal thing - one shouldn't condemn them for using scores, but without can be freeing. Mirga, for example, certainly wasn't showing off in the CBSO Prom when she conducted Beethoven without, Stravinsky and Barry with.

Yet another enticing post from you, and another piece wholly new to me. I have the Rozhdestvensky cued up and look forward to a listen. About playing from memory, I would think it would be freeing, unless, of course, memory fails. I remember a young student performing Ligeti's Devil's Staircase and getting stuck at a particular point. He dove back in, tried again, twice more, as I recall, with the same result. His professor called out to him to take a break and come back after intermission, but the student shook his head no, then sat for a minute or two, composed himself, and picked up where he'd left off to achieve, this time, a successful completion of the piece. Needless to say, we were a friendly crowd and cheered him for his gumption, if nothing else. But I did wonder whether he'd set the bar for himself unnecessarily high by trying to play the piece, a monster no matter what, from memory.