Two Sundays ago, I was basking in the focused glory of the Latvian Radio Choir singing Rachmaninov's All-Night Vigil (Vespers) at a late-night Prom (photo courtesy BBC/Mark Allan; the rest apart from the Vereshchagin painting are mine or taken on my camera in the case of the Imperial College shot). 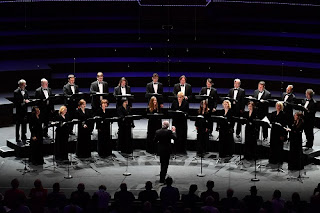 On the following Tuesday morning, by pure serendipity, I happened to be in Riga, where my wonderful Latvian friend Kristaps took me to see St John's Church in the Old Town, knowing it was where the choir had recorded the Rachmaninov. 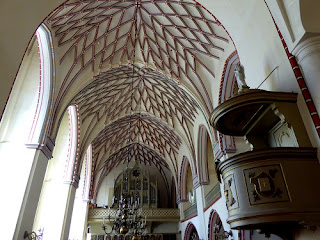 That Sunday before I could take off to Latvia and one of my favourite places in the world, Pärnu in Estonia, was quite a bit of work. First I had to prepare for and then speak at the afternoon Proms Extra event in the Imperial College Union just down from the Royal Albert Hall. Here I am, below, with one of Radio 3's very best presenters, Louise Fryer, and my New Best Friend (we hadn't met before), Royal College of Music doyenne and Taneyev expert Anastasia Belina, a very vivacious person. You can hear an edited version of the talk in the interval of the BBC Radio 3 broadcast of the main orchestral concert, with introductory chants from the LRC, for a while at any rate here - the Proms Extra slot starts at around 1:00:27. The choir's late-night performance of the Vespers is here. 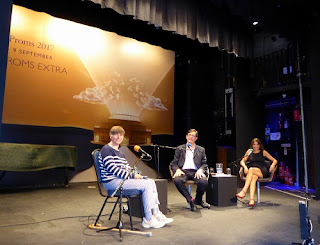 Then I very willingly attended both Rachmaninov Proms and wrote about them on The Arts Desk - though the review had to be pieced together en route for Riga. The full Baltic experience of basking once again in the amazing performances of the Estonian Festival Orchestra players, both collectively and in chamber music, is covered here.

Kristaps packed such a lot in to the three hours we had in Riga before taking the coach to Pärnu at lunchtime that I can't cover it all here - another post will be necessary for the famous street of Art Nouveau buildings where the small publishing house for which he works is based. But I think we can justify two religious edifices and two places with a connection to a very famous composer. Our first interior was that of the Russian Orthodox Cathedral of the Nativity, built between 1876 and 1883 at Alexander II's behest, two of its golden domes glittering through the trees here on a hot summer morning. 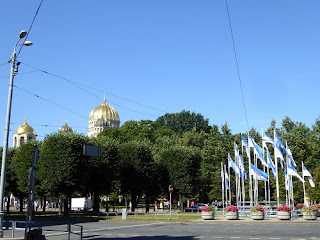 It became a Lutheran church during the German occupation of World War 1, and later a planetarium under the Soviets. Its lavish restoration was completed in 2000. 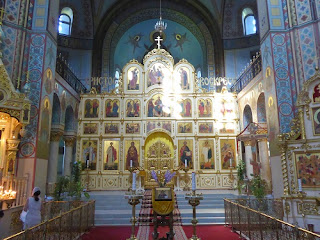 The faithful line up to kiss their favourite icons 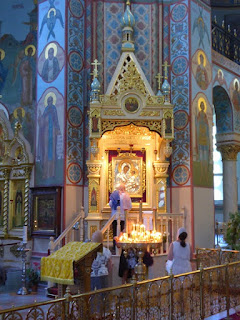 and under this fresco of the Nativity, 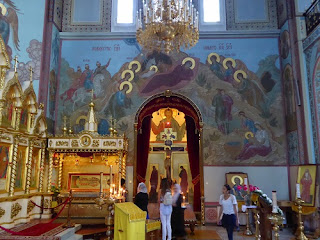 painted by Vasily Vershchagin. There are two 19th century Russian artists of that name, and I hope it's the more significant one, if only for the stark contrast of his most famous image painted on the eastern battlefield. 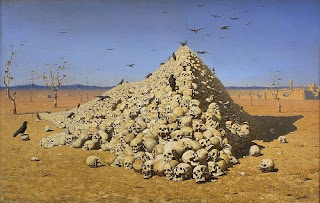 I got quite 'bolshie' when ferociously asked by a headscarved lady not to photograph (I did so without flash, and saw no prohibitive signs): this is as close as I could get to a Pussy Riot act against the wretched Russian Orthodox Church of today, Putin's poodle and hijacked by a vicious leader.

Of course it's all impressive, but much more to my taste was the modest and more ancient artistry of St John's, founded by Dominicans in 1200 and taken over by the Lutherans in 1587. 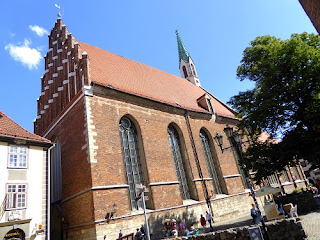 Rebuilt several times, extensively so after a major fire in 1677, it retains its beautiful Gothic ceiling, the finest in Latvia. 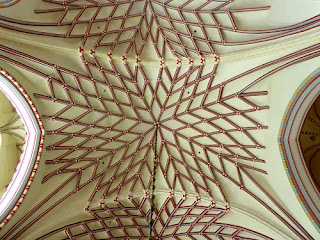 Kristaps knew of my Wagner passion so he managed to get us into an apartment block on Brīvības iela which stands on the site of the young(er) composer's dwelling between 1838 and '39. Here he wrote Rienzi, which I have the dubious pleasure of declaring I've now witnessed live, or about half of it. The stained glass window dates from 1913 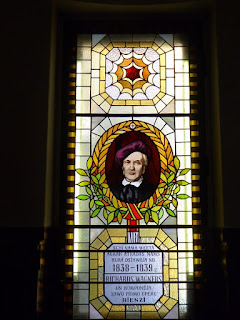 and there's a plaque plus a portrait in an alcove, too. 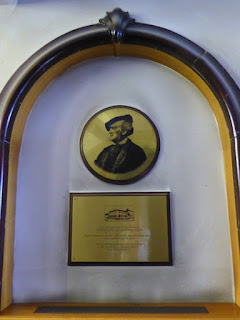 The present building is impressive, in any case, with its fine staircase. 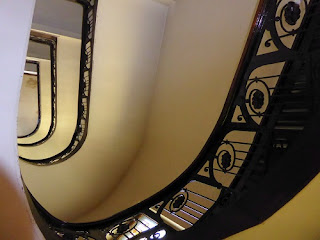 Pushing it a bit for time before the coach (which we caught, eventually, but not at the coach station), K kindly detoured down Richard Wagner Street - all names undergo rigorous Latvian reworking - 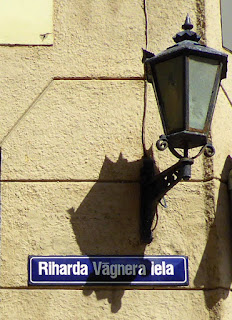 to see the concert hall he frequented when it was an opera house, with its appropriate dragons. During his time in Riga, he staged five different operas and conducted another 20. In orchestral concerts he focused - no surprise - on Beethoven. There's more useful information on Wagner in Riga here. 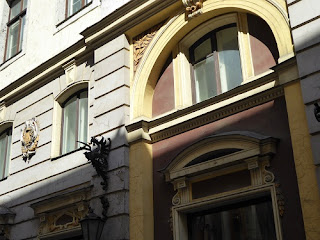 The hall/theatre subsequently played host to other very distinguished figures (I leave you to make them out). 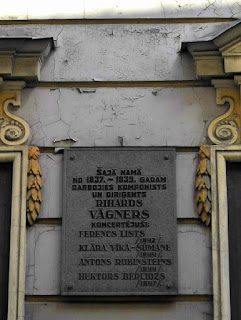 And so, speedily, back through the green belt and via the Opera House, to a scramble for the coach, which concerned my laid-back friends and taxi driver far less than it did me. But I'm a great admirer of the brinksmanship which wants to show the visitor as much as possible: I do it myself, much to certain folks' consternation.
Posted by David at 13:03

At the risk of yet again going off piste. your comment on the Russian Orthodox Church reminds me of an event which occurred whilst I was in Moscow, and which perhaps illustrates Russia. The Orthodox Church took a strong line against the activities in Moscow of the Church of England ( news to me that our Church had such an outreach, but apparently they were beavering away in some way) and the Jehovah's Witnesses ( I think it was- it might have been the Mormons). The Mayor of Moscow ( he was quite good at sorting things, according to his own principles) advised the two organisations to take legal advice, and recommended a Russian lawyer.
Anyone who understood Russia would have known that it was wise to take that recommendation, since if the lawyer recommended was not the mayor's second cousin. some money would be involved. The Church of England took that advice and won the case. The Jehovah's Witnesses ( American representatives) were determined to be independent of any suspect connection and took their own lawyers and lost their case.I fear that this sort of thing is so ingrained in Russia that it will take a long time for it to be bred out of the system, indeed under Mr Putin I cannot see how that can happen.It results, if I can make a rather simplistic comment, from 75 years of communism, under which everyone had to fight in every way for their own interest, since no one else would do so. What was selfishness was the only possibility. Hence the idea of the public interest is very weak, and to many people of no interest.

Thanks for recounting that. Surely the CofE has outposts everywhere - why not Moscow?

Yes, there used to be an Archdeacon of the Riviera....imagine ! And the CofE outposts were usually High Church - smells and bells and bobbing about, and, as you say, why not Moscow?

We spent a very singular Christmas Day in Isfahan with the beleaguered Anglican Bishop and his flock - mostly blind Iranians who had been raised in English and German missions. Although their Christmas was later, some of the Armenians joined us for a service and a Nativity play put on by the (sighted) children of the parishioners. I don't know what's happened to the community since. The previous Bishop's son had been stoned to death by an angry mob and he settled in Basingstoke. It later transpired that a rather heroic blind man whose family we visited had been a spy - difficult to know the circumstances.

The ceiling of the St. John's Church is striking. I would never have guessed it was so many centuries old. The Vershchagin painting, Apotheosis of War, is also stunning, and seems more modern than the year given for it (1871) as well. It would be interesting to know for sure whether he's the same artist as for the Nativity.

Well, St John's did have various makeovers, but the meshed vaulting is 15th or possibly early 16th century.

As for Vereshchagin, let's hope someone can enlighten us, because the internet, at least as far as I've been able to ascertain, doesn't. That striking painting I first saw on the cover of an EMI recording of Musorgsky's Songs and Dances of Death. Very appropriate for the final song, Death as a Field Marshall.