It was 37 years ago this May that the Edinburgh University Theatre Company put on a production of Kander & Ebb's Cabaret in the much-loved Bedlam Theatre. It had a huge impact on all of us lucky enough to be in it. Mary New (now Amorosino), my then soon-to-be flatmate, whom I'd known (but not really since we were juvenile chalk and cheese) from All Saints Banstead Choir days and still a close friend, incarnated Sally Bowles. 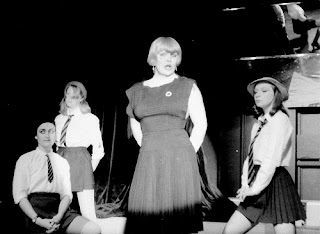 Living as she does in Washington, Mary wasn't able to make a wonderful reunion held in the Stockwell home of Sarah Macnee - then the designer, now Executive Director of Crying Out Loud. Our MC, the fabulous Leonard Webster, also lives in the States, having performed the role professionally (in Leicester, I believe) since those student days. But it was still quite an assemblage. 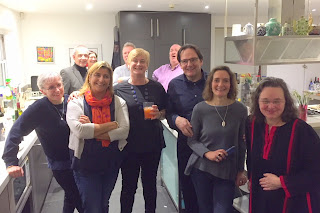 Some of the folk in this photo - courtesy of Kerry's man Dom (more about her below), since though I was on the staircase snapping alongside him, my shots are less sharp - weren't in the production, but all had some kind of involvement with the Bedlam. So I'll add parentheses where relevant. From left to right, Eleanor Zeal (two-time Fringe First winner and co-godparent of beloved goddaughter Rosie - Rosie's  mother being our equally beloved and never forgotten late friend Nell Martin), Pat O'Connell (music director), Kerry Richardson (uncharacteristically distant, but we'll see her in a moment recreating her Fräulein Schneider), Antonia Giovanazzi, half of Simon Bell (Clifford Bradshaw, and still my best mate), Claire Hicklin (Bedlam queen when I arrived to audition at the theatre in Freshers' Week 1980, and I was always a bit intimidated by her impossibly glammy former self, all Stockbridge charity shop fur coat and smoke from pungent Gauloises; if only I knew what an eerie little person she was inside, she told me), John Stalker (director, Bedlam supremo and now big-cheese producer, predictably enough), Peter Forbes (Herr Schultz, and another big cheese, just wowed everyone as Buddy Plummer in the National Theatre Follies - back then always The One Most Likely To, despite his modesty), Gabrielle Firth (as she then was; she must forgive me for not having recognised her from those days) and Sarah. 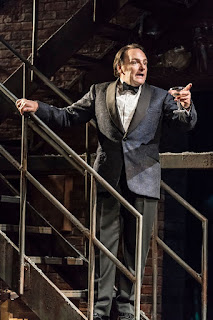 That's Peter as Buddy, pictured for the NT by Johan Persson. I'd previously seen him as Malvolio, Max Reinhardt's business manager Rudolf 'Katie' Kommer in Michael Frayn's Afterlife - a play I liked a lot more than most - and Balvenie, Earl of Douglas in Rona Munro's magnificent James Plays, but who knew he could sing quite as stunningly as he did at the National? Herr Schultz required only a kind of crooning, but still he conveyed all the necessary quiet pathos, and Kerry made me weep every night with her rendition of 'What would you do?' I'm so glad she's become a good friend in the past few years, too. I knew I wanted the 'older couple', closer in years now to their roles, to recreate this pose. 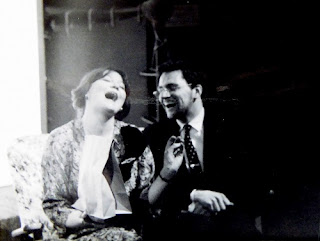 And gamely they did - there's a whole string of diverse, fun posturings, but this one comes closest. Peter seems to have reincarnated his pose, laugh apart, more accurately than Kerry. 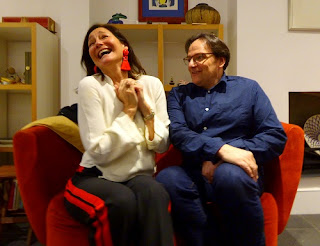 What filled me with a long-lasting delight about the evening was that everyone present seemed - so far as one could tell - sorted and happy. Sure, there had been some divorces and past troubles, but - touch wood - we all seemed on an even keel, contented with our lot. So very different from Follies. And John - I asked him if he still thought our Cabaret was good, and he told me he'd seen many since, and yes, it was in his view the best - would be happy to help with a 40th anniversary sing-through of the show. Maybe more (a special script?), maybe on the Edinburgh Fringe, who knows? Let's get organising, and hope no-one dies in the meantime... The extra body in the photo below, by the way, is Sarah's partner Walter, meeting and chatting to whom was another huge plus (he's a staunch and active Remainer). 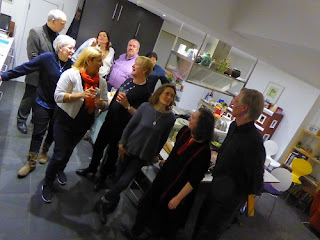 I may not have quite matched the pose in the old photo, but I definitely will have produced that corny expression during the show itself! What a great round up , David. I’ll bring a pineapple next time! Kerry x

To look at, Frau Grosz-Richardson, not to eat (we don't want to give Herr Forbes gas). NB nothing like listening to Lotte Lenya and Jack Gilford to brush up on the lyrics...

Thanks for such a wonderful piece, David. I really enjoyed as I did the reunion. Everyone looked splendid.

Such happy memories of the production which, one way or another, seemed to have involved just about everyone I knew or liked at university.

How these things cascade down the generations. Cabaret is far and away my daughter Eve's favourite musical. I am often serenaded by one of the songs, usually the emcee's.

Wonderful to hear, Simon - I'm getting snatches of it around the house, having played J the Broadway cast recording on Saturday morning. It's always been a favourite of his, too - though the film rather than the stage show, but he quickly took to the Schneider/Schultz numbers. Interesting variant on 'If you brought me diamonds' is 'you don't bring me diamonds', wonder why...