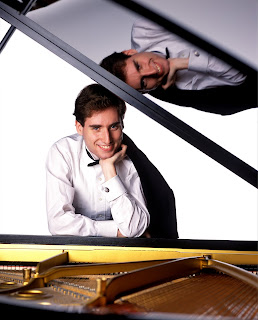 Giltburg, that is, not Godunov (he comes later in the week). And no, it wasn't the twentysomething pianist's winning smile, as pictured above by Eric Richmond, which had me pedalling like fury from the Barbican to the Southbank after my pre-performance talk on Bruckner's Fifth Symphony last Wednesday. Giltburg is already an interpreter of astonishing maturity and total control over the weighty, glowing sound he draws from the keyboard. I was bowled over by his debut recital disc in a BBC Music Magazine review, and a couple of months back, he talked to me over the phone about his then-forthcoming Queen Elizabeth Hall recital (the result appeared in this interview-profile).

It was a daunting programme indeed, and he swept into Beethoven's Op. 111 right at the start with magisterial aplomb, holding a very attentive audience silent between movements. I've never heard the trills of the variations quite so metaphysical or transparent. His decision to move straight on to the same unearthly light in Scriabin's Fourth Sonata was vindicated, too - such flight, such hovering on the brink of silence.

The second half was rather massive too: again, a monumental curtainraiser in the shape of Rachmaninov's greatest Etude-Tableau (and for me, perhaps the most haunting solo piano piece ever), Op. 39 No. 7. After bathing in the depths of Melnikov and Hayroudinoff for the Building a Library earlier in the year, I found this rather more externalised, if powerful all the same. Schumann's Carnaval had plenty of light and shade, not quite enough of the kittenish spring I love in Rachmaninov's own recording. The encores were idiosyncratic: a floating wistfulness about Rachmaninov's transcription of the Kreisler Liebesfreud, a further Etude-Tableau I was hoping for, the one about Red Riding-Hood and the Wolf. Again, I've heard more playful accounts, but none more frightening or ferocious.

So was it worth leaving behind Belohlavek and the BBC Symphony Orchestra in Bruckner Five? Impossible to say; by the end of my allotted forty-five minutes of talk I was hungrier than ever to hear what they'd make of that greatest of all finale solutions, the introduction of the noble chorale minutes into the upheavals. Well, I'll get to hear the performance on the broadcast. My crowd included several enthusiastic Brucknerites who seemed to think I'd passed the test, so I was happy with that.

Yet what dilemmas London musical life poses. I could also have heard that same night Jurowski in Rachmaninov's Symphonic Dances, Elektra and Boris G (time enough for those anon) or Andreas Haefliger, whose agent had been torn between him and Giltburg. Sometimes I forget which mode I'm in, as in the case of the Friday before last, when I whizzed into Broadcasting House for five packed minutes with Tom Service, talking about another BBCSO concert from weeks back which was being broadcast that evening and whizzed away again to hear Rozhdestvensky in Tchaikovsky (some wonderful touches there, but generally too laid-back an approach to compare with the earlier wonders of Jurowski and Jarvi. And the Second Piano Concerto, played with surprising sensitivity by Mrs Noddy Rozh, Viktoria Postnikova, does go on for ever, though its level of thematic invention is extraordinarily high).

Just as dizzying is what one can catch between venues. That evening, having chewed the cud with Tom about Pintscher's hyper-refined, over-detailed Rimbaud piece Pourquoi l'azur muet, I found myself in Regent Street, dazzled for once by the Xmas lights: no Disney tack this year, just nets of stars. 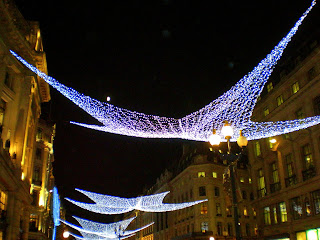 With the moon above or behind them, they tied in rather nicely with the Rimbaud settings we'd just been discussing. How about (and I'm going to be especially pretentious and not give a translation): 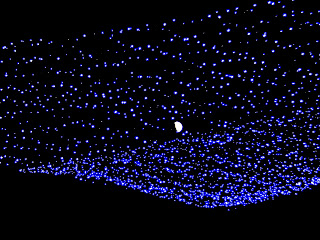 Or - in the 'Phrase' leading up to 'Antique', my favourite 'bit' of Britten's Les Illuminations, lines not set by Pintscher:

OK, these are just the twinkling summons to sorely-needed Christmas consumerism, and always too early - I don't linger in shops playing seasonal music. But the city does shine in the November gloom. On another short journey, from Mansion House to the Barbican for the Prokofiev events, I came across the Lord Mayor's coach temporarily liberated from the Museum of London and sitting in a glass booth of the Guildhall prior to its annual excursion in the City parade. 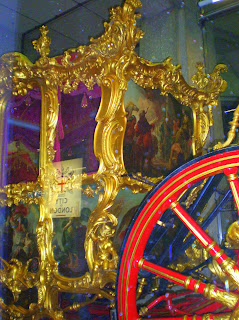 No doubt it's now turned back in to a pumpkin, but what a treat just to stumble across en route. Tonight I'll be taking another curious journey from London Bridge to Maida Vale for the only one of the three Turkish music events I can make in the BBCSO's collaborations with Istanbul-based composer/player/teacher Michael Ellison and the traditional Turkish ensemble of Ali Tufekci. 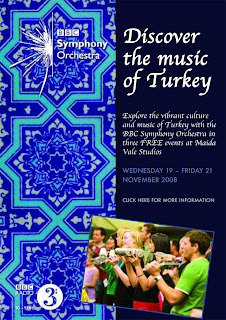 These events are free - the link for further details you can't click above (but can here) takes you to the BBC Symphony website. On Tuesday Michael came to my Inside the BBC Symphony Orchestra class with chief producer Ann McKay and fired us all up to hear more. He covered an enormous amount of ground, from folk and religious music to the four generations of classically-trained Turkish composers who have appeared on the scene since the 1920s, and his obvious enthusiasm was infectious. I think he and Ann were impressed by the students' lively questions, too, which ranged from observations on the similarities between this, Iranian and Cretan music to discussions about the Kurdish problem and the music being made by Turkish communities in Germany and whether there's any fusion going on (there is). I now have a long list of musicians and vocalists to go and hunt out on CD.
Posted by David at 12:44

Maybe you've heard all the drummer jokes you'll ever want to hear, but here's a Turkish one.

A Turkish drummer has had a lifelong ambition to visit America to study jazz drumming with his idols. In order to earn enough money for the venture he has joined 'Abdul Ahmed's club date band', which specialises in Turkish folk music and is much renowned in the circuit of well paid society gigs. After saving up enough money he leaves the band and moves to New York where he takes private lessons from his favourite drummers, Steve Gadd and Peter Erskine.
After two years of hard study and penniless, he returns to Turkey, where necessity once again forces him to join the famous Abdul Ahmed.
Eager to show off his recently acquired jazz licks, the drummer crams every available space in the arrangements with fills and breaks of astonishing complexity, displaying all of his breath-taking technique.
After enduring an hour of deafening pyrotechnics, Abdul Ahmed approaches the drummer during the intermission and takes him to one side. 'You know, I think what you are doing is very nice. Very, very nice.' he says smiling patiently, 'but for this kind of music all I want from you is a simple offbeat on seven and nineteen'.

Good to hear from you, Howard (presuming there can only be one Howard Lane with a fun take on drumming, the one I know).

Learnt some interesting things from Michael Ellison about Turkish metres last Tuesday - some pieces have over 100 beats to the bar, so a five or six minute number can be only four bars long...

If it IS you, how's Carla getting on at Magdalene? Drop me an e-mail.

Yes it is me. Sorry I should have made myself better known. 100 beats to the bar eh? But then, if you have to count the rhythm, you're not really FEELING it...

Carla is fine although Claire is the best one to ask for news. Her room is above an off licence so I'm sure she's having a good time. She'll be home on the 6th - hardly seems like she's been away.

Oh good. Well, anyway, do listen out on R3 for the Ali Tufekci Ensemble - what artists! A quartet the like of which I've never heard before. Seemed to be feeling AND counting.

But forgive me, Howard, it hadn't occurred to me - it did to J - to ask why on earth Carla is living above an off licence? Shouldn't she be living the Oxford dream in a cosy room within the Magdalene walls?

I've sent a link to Carla so she can send you all her news herself, if she has the time. She'll be home next week in any case.

There was a Turkish band on Late Junction recently which I will try to catch on iplayer (not the Ali Tufecki Ensemble though). And if you don't know Lebanese jazz oudh player Rabih Abou-Khalil (nothing to do with Turkey really) I can't recommend him highly enough.

In December I'm playing with two big names on the UK free jazz scene, Maggie Nicols and Veryan Weston, so I'm quaking in my boots and putting in lots of practising.

I thought I would search for this Jarvi thread to which you said you would add a comment of mine. I have yet to find it, but, en route, I stumbled on this brief reference to the Lord Mayor's Show. This lover of ceremony attended this twice, in 1988 and 1990, but even more impressive was, and still is now that I can listen to it via the Internet (though not nearly as impressive as when live and in person), was the Remembrance-Day ceremony at the Cenotaph, with _ALL_ those bands marching in, etc. I still had some limited eyesight in those days, and, in 1990 in particular, I was standing at the barricade just outside what I am told is the Foreign Office, and, when Her Majesty entered an exited, I was close enough that, had I _MOST_-_NAUGHTILY_ have wished, I could have reached out and touched her! I also subsequently learned, though I probably should have already known it, that it is not proper to speak to her unless she speaks to you, and, had I known that and had it occurred to me at the time, I could have quietly, yet audibly, said something on the order of "God bless Her Majesty!" as she passed. As far as I am concerned, we have some of the finest military ceremonies in the world here in the Washington Area, but you Brits _REALLY_ get that one _RIGHT_!

p.s. I have never attended, nor heard complete, the Trooping of the Colour, but the Changing of the Guard at Buckingham Palace, at least on the few occasions I was there, seemed mostly an homage to American pop music, at least during that sequence in the middle when the Guard is actually changed, and I was _MOST_ taken aback when I once heard one of the bands marching in to our "Stars And Stripes Forever." Yes, I trust we all agree that it is a great march, but what about "England for the English" as Elgar said? In my opinion, yur (your?) culture is becoming too Americanized, to the point that I think you might do well to change the words to that old song to go "There'll Always Be America Where England Ought To Be," and call yourselves "Little America On The Channel." I had not actually planned to get onto this tack of mine here, but here it is for what it is worth, potentially controversial though it may be.