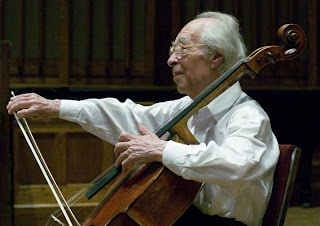 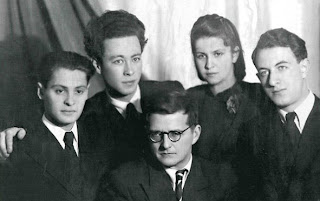 I'll leave details of Berlinsky's life, and some of the pithier utterances I was lucky to glean, to the above obit. But it is a loss - maybe not as wrenching a goodbye as the one to Slava Rostropovich, but the end of an era all the same.
Posted by David at 22:59

So you knew Maestro Rostropovich as well? As you presumably know, he was Music Director of our National Symphony for a number of years, and I met him at least a few times early on, though never got to know him well enough to receive his famous kisses. He was indeed a kind man, and, though I own and play the Wallfisch/Mackerras recording of the Dvorak _Concerto_, "Slava"'s with the Boston Symphony may be marginally finer. I have him in the two Brahms _Sonatas_, though I recall at least some of his recorded Tchaikovsky as a conductor being rather on the slow and dull side.

This gives me hopefully-convenient opportunity to ask, should I end up buying one, which recording of Prokofiev's _Romeo_ _And_ _Juliet_ you prefer.

p.s. I was reading some reviews on that popular Internet buying page yesterday, and am now more convinced than ever that, should I buy an _Ariadne_, the Kempe is the one I should get!

And greetings to you. I was lucky enough to interview Slava three times, and though I sometimes got a slightly different version of the same story twice, he was always hugely entertaining, and the energy was invigorating. I've never been so shaken up by the death of an artist as I was by his - as I think I mentioned in the blog back in April 2008, a year on - and I couldn't stop playing his recordings.

In selecting tracks for the Radio 3 tribute we made on the day of his death, I found that the Schubert Arpeggione Sonata with Britten at the piano, Prokofiev Sonata with Richter and, of course, the slow movement of the Dvorak especially impressed listeners. His way with the latter isn't the only interpretation by any means, and perhaps a little far from what the composer might have expected, but I do love his broad and noble recording with Giulini.

Prokofiev's Romeo and Juliet - complete, Ermler (though Gergiev's with the LSO 'live' will be released later this year); excerpts, Abbado and the Berlin Phil on DG.

There can be _NO_ doubt about Maestro Rostropovich's energy and enthusiasm? Did his approach to the Dvorak change significantly over the years, or is what I heard in the Ozawa recording substantially the same as what I would hear were I to listen to the Giulini (I honestly was not aware that he had recorded it with him, tthough I do know that he recorded it several times throughout his career)?

I do not recall ever having heard of Maestro Ermler. Maestro Gergiev's current tenure with the LSO seems controversial at best, though, while not knowing his work intimately, there seems to be no doubt as to his passion.

p.s. The question mark at the end of my first sentence was a typographical (or rather an unthinking) error.

I enjoy some of Maestro Abbado's Mozart, particularly the _Requiem_ despite his chorus seeming somewhat detached in places at least. I like the style, and his "mix and match" approach to the edition seems to work as well.
And he has Mr. Terfel!