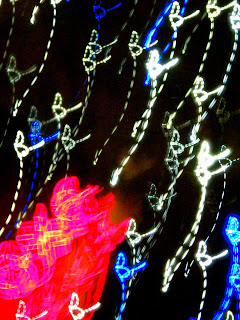 The bright lights of London at this time of year certainly help to keep it from looking like the 'great, grey Babylon' of James's famous description, whatever's going on in the presumably (and justifiably) gloomy hearts and souls of the city workers at the moment. Not all these illuminations are quite seasonal - I think the blueing of the trees on the Southbank and, of course, the Oxo tower on which I tried to do some impressionistic camerawork above, are there to stay. And Southwark council seems to have been doing some sterling work with artists underneath the arches on Southwark Street. 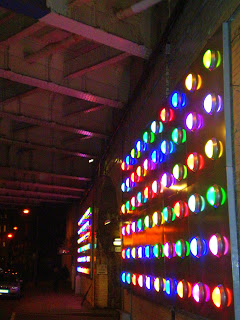 There's a winter fair I've been cycling past on my way home through Hyde Park, with an arresting snowflake big wheel which looks especially alluring after dark. 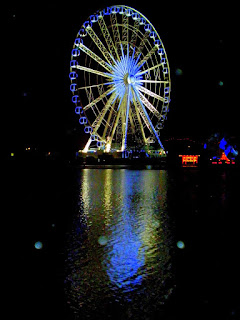 All life moves inside on the grey days. Southwark Cathedral was a refuge from the pouring rain on Saturday, when Anneli's friend, and ours now too, Riikka Hakola flew in to sing for the Finnish church with expert pianist Ilkka Paananen. 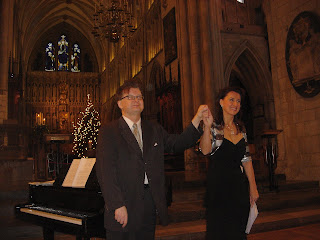 I liked their Sibelius and their Finnish carols, but what struck me most was an 'Ave Maria' by Franck that I'd not heard before, effortlessly effective and simple.

Jonny Brown came for an exhibition of his south-of-France impressions, lighting up the 12 Star Gallery with his usual panache (and spot the artist in the below gathering - not difficult). 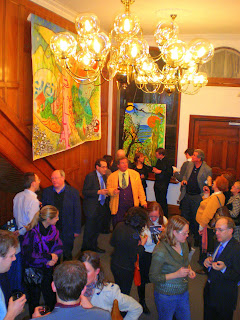 Meanwhile, our mutual friend Ruth Addinall, whose elegant website is worth a peek and who paid a flying birthday visit in November, has been busy with her own big exhibition up in her long-term base of Edinburgh, at the Patriothall Gallery. I'm not much use to either artist, as Jonny's exhibition finished a couple of weeks back, and Ruthie's yesterday, but...ars longa. So here's another Addinall I'd like, her 'Fantasy Garden': 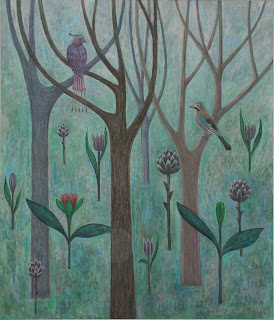 Which leads me into the woods of the Royal Opera Hansel and Gretel. They're going through a funny phase - I hope soon to be resolved - of saying no to publicity shots on blogs, so those of you that haven't seen the show will have to wait until Christmas Day to see what all the fuss has been about, not least the storm in a teacup conjured by the tut-tutting Daily Mail.

The trouble with this new production by the Caurier-Leiser team is that it can't make its mind whether to be picture-book pretty or gas-oven nasty. There's no overall identity, as there was in the terrible-mouth Jones production, with its dazzling dream banquet, or the famous Pountney show set in the 1950s. The children, as has frequently been remarked, certainly haven't gone short of a good Bavarian meat dinner or two, so the dream-panto 'present' (guess what) doesn't have much of an impact. I like to see a fair forest once in a while, but even I felt a bit squeamish about the witch's cupboard of hanged children. It just doesn't fit.

The star of the cast I saw was unquestionably Diana Damrau - a convincing girl, a lyric soprano who projects every phrase with a Lieder-singer's art, lovingly indulged by a sometimes too-caressing Sir Colin Davis. Kirchschlager strains for the upper register, and isn't half as real a boy as Alice Coote (alternate cast, and Jones's Hansel); Anja Silja seemed to be ambling her way through an indeterminately-characterised Hexe, though it's always good to see her on stage, if no longer to hear her (at nearly seventy, the glory days of her Kostelnicka and Emilia Marty must be over now). My students all agreed, though, that it was hard to see another Hansel after four weeks in the company of Jones at the Met. 'That's the one', said Alice Coote when I bumped into her - and it's not the only view possible, but so far, for me at least, it's the compelling best. 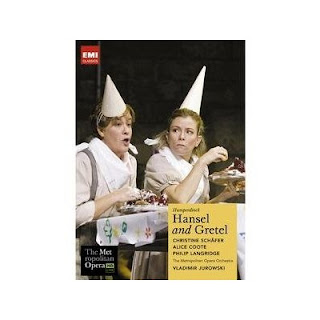 Don't hesitate to buy this as a Christmas present for six-year olds plus - they'll love it. Oh, and I can't resist something that's struck me: with Langridge dragging up as the Hexe at the Met, and Ann Murray double-cast with Anja in the role at the Royal Opera it must be the first time that a husband and wife have ever sung the same role...
Posted by David at 20:48

I've been racking my brains to find another husband/wife example. I thought I was onto a winner with counter-tenors, but they don't *ahem* tend to get married.

Ooooh- did Julia Varady ever do Gluck's 'Orfeo'?

No other examples have come to my mind either, though your own husband-wife parallel reminds me of how odd it was in concert many years ago to see Fischer-Dieskau's Bluebeard terrorising Varady's Judith: the ultimate married-couple-disaster-scenario...