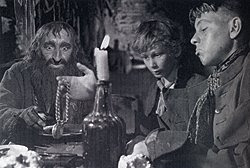 Oh, what a fool I was to think David Lean's Dickens films were just a couple more Hollywoodised adaptations. I suppose in those days I was such a puritan fanatic of the novels that any inevitable trimmings raised a groan - how, for example, could he leave creepy Orlick out of the drama of Great Expectations? 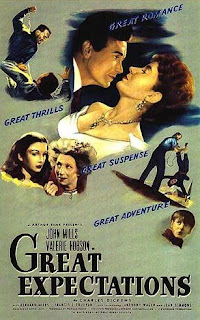 Now, I guess, I accept that a book is one thing and a one-and-a-half- to two-hour film quite another. How accomplished is the narrative drive of Lean's Great Expectations, how broody and cleverly composed his scenes on the marshes. Of course, said a cineaste to me earlier this week: don't you know that the Pip-Magwitch sequence at the beginning is one of the classics of film theory? Well, I didn't - but I appreciate it more now. I love how much of Dickens' dialogue gets accommodated, and how well it's delivered by the well-modulated voices of Martita Hunt and John Mills. Hunt even makes us feel sympathy for Miss Havisham. 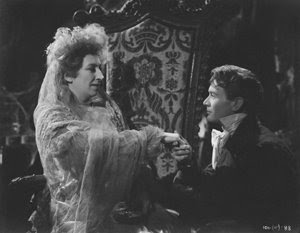 So after revisiting this we realised we'd never seen Lean's Oliver Twist either, and prioritised that with LoveFilm. My word, the shadows and the faces: worthy of Kozintsev and Trauberg and their Soviet 'Factory of the Eccentric Actor' stable back in the 1920s and '30s. Alec Guinness's Fagin overdoes the nose-putty, but it must have been rather courageous to go along with the Jewish character like that just after the war. Could two performances be more different than Guinness's humorous, alert Herbert Pocket in Great Expectations and his nasty, unsentimentalised king of thieves (pictured at the top with two of Lean's outstanding child actors, John Howard Davies as Oliver and Anthony Newley as the Artful Dodger)?

Guinness was a genius. I've never been half as moved by any of Olivier's or Gielgud's performances on film (and I only saw Gielgud once on stage, as Julius Caesar, but I remember more vividly Ronald Pickup's Cassius - perhaps because I was playing the part at school at the time - and Mark McManus's Anthony). Last year we worked our way through the BBC Smiley series, and marvelled at Sir Alec's subtlety. And to round off our mini-festival of British cinema, J called up Tunes of Glory, directed by Lean's former cinematographer Ronald Neame without much visual splendour, but featuring a great double act from Guinness's roistering Scot and John Mills as the tormented, up-tight army man sent to replace him as commanding office of the regiment. 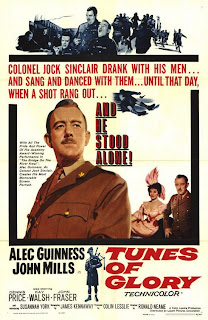 Interesting that Guinness gets the lion's share of the poster art there. Mills is just as remarkable, as indeed he was in Scott of the Antarctic, which so surprised me when I was indulging myself in classes on the Vaughan Williams symphonies (the film music works much better than its concert-hall spinoff). We think only of English stiff-upper-lippery, but how good Mills was at conveying the turmoil beneath. And Tunes of Glory is all about that inner chaos: James Kennaway's script may be short on external action, but how deep it goes in its psychology as both the Guinness and Mills characters try to smother the fallout from the Second World War. How touching Mills was, too, shortly before his death, as old Chuffey in the magnificent BBC serialisation of Martin Chuzzlewit.

And now, can you believe, I have to find a cinema screen big enough to do justice to Lawrence of Arabia, which I've still not seen.
Posted by David at 11:52

I saw the 1989 re-release of the restored Lawrence of Arabia in the one cinema in town that had the capability of showing it in full 70 mm, wide-screen release. The mistake I made was not going to see it again. It even featured an intermission, just after the scene when Jack Hawkins and Claude Rains are strolling in the pavilion in Seville, talking about Lawrence. That cinema closed something like 2 years later.

BTW, while on the topic of Alec Guinness, one vintage film that I'd love to see on a big screen is his adaptation of The Horse's Mouth, if for no other reason than to see the big building-side painting at the end of the film on a big screen. I saw it several times on PBS in my younger days, and eventually read the book.

Oh, and how did the BBC SO session of Prokofiev go?

Greetings, Geo., and have we met? I can't think how otherwise you knew about the BBCSO Prokofiev 'Discovering Music', as I don't think I flagged it on the blog, but maybe I mentioned it in one of the exchanges here.

Well, the answer to that one is, it was exhilarating once I'd got over the terror of facing all those musicians with my examples - they took some persuading but played it extraordinarily well in the end under David Robertson, an ideally deep and at times terrifying performance. I'll write up more about it when I have time and the photos downloaded.

I ought to see The Horse's Mouth too - it has, I gather, a Prokofiev-derived score.

Preparing to revisit AG's Ealing triumphs, several of which I know and love, I realised to my horror that I hadn't in fact seen The Lavender Hill Mob (though I've seen more obscure Ealing offerings). So there's one to look forward to.

Yes, we have met; for whatever reason, I slightly altered or was obliged to alter my posting name on my account. Anyway, good to know that the BBC SO session went well with Prokofiev 5. I think it was in one of the comment exchanges with JV that you mentioned it in passing.

I totally forgot that The Horse's Mouth has the music from Lt. Kije when I posted the first comment. Of course, Woody Allen used it too in Love and Death, but no paintings on the sides of buildings there. The Criterion Collection has what looks to be the original trailer at this page.

I've seen the more famous Ealing films on PBS as a youth (e.g. Kind Hearts and Coronets, The Lavender Hill Mob, The Man in the White Suit, The Ladykillers - funny how they're all Alec Guinness ones that I mention), but not so much the more obscure ones.

Hi David - delighted you chose to rewatch the two classic David Lean Dickens films. They had no budget -they had to improvise - and so great things happened, despite whatever was marketed after. I think Alec Guinness on the Fagin front really really wanted to the part - and if I remember, for very anti-anti-semetic reasons (will need to look that up)but was actually far too young for it, and hence the rather overlaying on the make-up. Otherwise he would have dangerously looked far too much like another Herbert Pocket; tho' conversely, John Mills being in his late 30s for the Great Expectations Pip part!If you notice, Lean then tends to focus you in very much from the protagonist's subjective visual point of view as you move through the scenes - but with great irony when the main character's actual self-knowledge and/or their true relationship with their environment can usually at the time be pretty poor. That then creates a terrific narrative dynamic - from the half-shadowy, half-hidden faces of adults seen by the Dickens children to the enormous wide-stretch desert in full 70mm colourful sun-glare -yet with Lawrence being just as self-lost.
Lean also went in for the multi-form image - where you don't need to see something happen to not know and feel that it is, and how it is, definitely happening - like Oliver's mother giving birth, the murder of Nancy or Lawrence's rape: brilliantly evoked by attention to detail in other things.
Anyway - Greenwich Picturehouse down my way did L of A a few years back - so just look up their franchise maybe -and you will definitely get to see it.

We also from the BBC class had an enormously major treat tonight - a fantastic time at the Gill Shahman concert: grabbing the best - though because shamefully empty - prime seats. We held our hearts.

Anyway, so kind regards and wishing you a happy Xmas before we all come back back again for the New Year.
Piala.

Hail, cineaste! Your perspective is much valued.

Yes, Johnny wasn't too young, and his accent keeps slipping; and of course Jean Simmons is so much lovelier than Valerie Hobson that the leap to the adult Estella means a serious loss of magic.

Well, I slipped off to Rattle's Schumann last night, having been told to 'stay in the bar' during the Sam Hayden (by the conductor, no less...how was it?) And I think I may have been punished, because I didn't like what Sir Si and the authenticists did with Schumann at all - Shaham in the Stravinsky would have been much more pleasurable. Sarah also defected and brought a wonderful cake with various jars of home-made deliciousness: you know she's chef to the stars?

Anyway, see you in January.