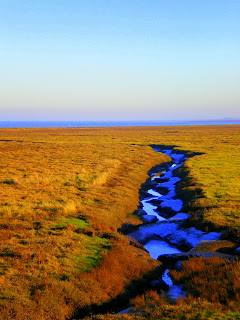 Last Saturday, with J going on from Brussels to visit the godson and family in Amsterdam, I packed a toothbrush and went back to undervalued gem King’s Lynn for a night and a day. It was a frosty, freezing but brilliantly clear weekend, so Jill and I put a thermos and crab sandwiches in the back of the car, drove into Lincolnshire and took the path along the bank on the edge of the Wash from a rather magical little place where two lighthouses sit either side of the mouth of the river Nene. This is our view of one of them from Guy's Head. 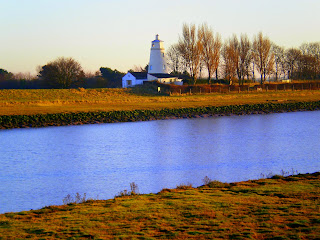 Our attempts to reach the seal breeding-grounds by the sea by striking out across the saltmarshes had to be aborted where the frosty channels finally blocked our way, but it was good to be briefly in contact with the springy turf. 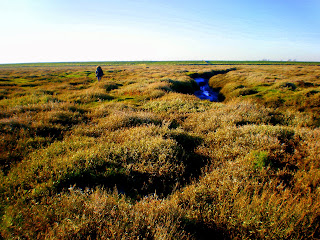 Several miles further along the bank we saw huge flocks of overwintering geese from Siberia flocking... 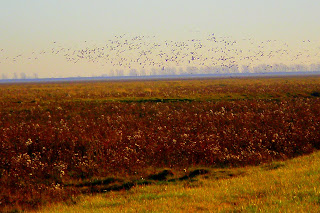 ...and settling on the marsh. 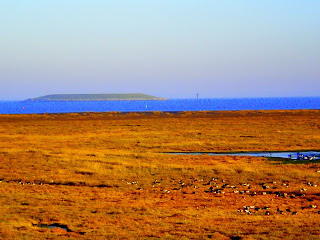 And as we ate our sandwiches and drank our much-needed coffee sitting on a lichened old plank, we watched a little (capital L) egret soaring.

This strange landscape, with the neatly-planted fields of the fens well below the level of the saltmarsh on the other side of the bank, is very similar to the one we know from our walks around the north Norfolk coast. And saltmarsh is half the territory of Jeremy Page's haunting first novel Salt, an atmospheric family chronicle which starts on the marshes near Morston before moving to the west Norfolk fens and back again. I didn't quite buy the last fifty or so pages, but there is vivid evocation of the local scene, even if you've never been there, and a wonderful description of the great flood of 1953. 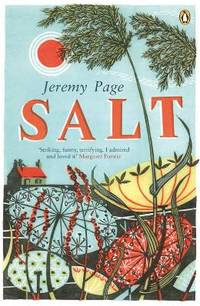 The cover is designed by the marvellous Angie Lewin, who shares with our current favourite artist Mark Hearld a place in the enticing St Jude's Gallery, Aylsham (we've still not been over that side of Norfolk to pay a visit).

As always, on Sunday we also managed to squeeze in a great church - this time Walpole St. Peter in the middle of strange fen country. It was Alec Clifton-Taylor's top English church, and I can guess why from the size and the light, the wealth of original furnishings and the woodwork on the chancel stalls, though I'm not sure which of the figures were added by an accomplished Belgian refugee in the First World War; neither the church guide nor Pevsner are at all clear on this. Anyway, here's a splendid quadruple head caught in the light of the setting sun (you can see two faces). 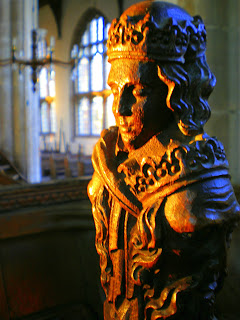 The south porch of c.1450 is lavishly adorned both inside and out, with a parvise or room above the entrance, as at Salle (which I still reckon deserves the title of Norfolk's loveliest church, at least of the ones we've seen so far). 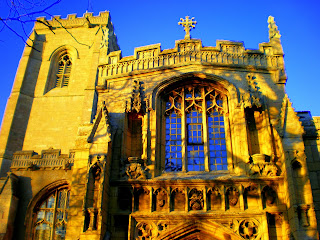 On my way to King's Cross from Covent Garden the previous day after a morning Hansel and Gretel (more anon if I ever get the photos - let's for the moment just say that Richard Jones still rules supreme) - I saw for the first time the stepped steeple of Hawksmoor's St George Bloomsbury gleaming in the dazzling winter light. George I stands in glory on the top; Tim Crawley re-carved the lion and the unicorn at huge expense in 2006, since the originals had been removed in the previous restoration of 1870. 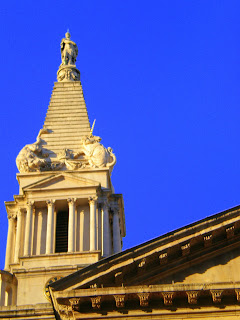 Jill, who lives nearby, thinks they should put a plaque on the pavement telling people to look up, because it really is one of the wonders of Bloomsbury and it's easy to miss (I've never noticed it before, though friends to whom I enthused were a little scornful of my previous head-down mentality). You can just glimpse the tower through the squalor of Hogarth's Gin Lane; this now quite genteel part of London was once a den of iniquity (and inequity too, of course - the rich lived just around the corner from the very poorest). 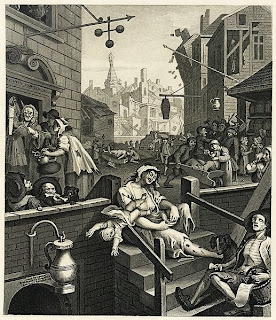