The hearth of the master

From The Letters of Lytton Strachey ed. Paul Levy (Farrar, Strauss and Giroux, New York): To Leonard Woolf, from 'Ye Olde Mermaid Inn, Rye, Sussex', 4 January 1909: '[Henry James] came in here to show the antique fireplace to a young French poet - you never saw such a scene - the poor man absolutely bouche beante [gaping], and all the golfers and bishops sitting round quite solidly munching buttered buns. He has a colossal physiognomy, and it's almost impossible to believe that such an appearance could have produced the Sacred Fount'. 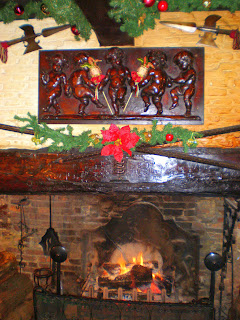 We were, accordingly, keen to see the vast fireplace - its width not captured above - on a visit to treat the mother-in-law to a Mermaid Xmas lunch on a biting cold, grey day. James's (and then E F Benson's) Lamb House still looks massively reassuring in winter, though of course the garden's best seen in the spring (we were particularly amused to discover from the guardian last time that there were two rival E F Benson societies giving very different tours around Rye - very Tilling). Pevsner tells us that West Street has a 'dog leg course', which means you can only see half the house as you approach it. 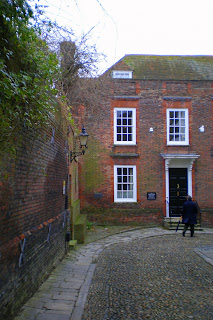 And so back to Lytton, writing to Leonard again, speculating on Clive Bell and Vanessa Stephen, 19 September 1906: 'He thinks that Vanessa will eventually marry him. It's impossible to say what may or may not happen in this monstrous universe, so that I can't help feeling a trifle nervous. If it should by any mad chance occur it would be a complete amalgamation of the disgusting and the grotesque. Imagine, please, the family!' No need to imagine - here's a granddaughter: 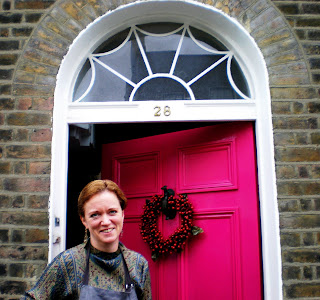 Not so bad, I'd say - rather handsome, in fact. And for common sense our dear Cressida, welcoming us here to Sunday lunch, says she takes more after mama Olivier than the obviously adorable Quentin (how I wish I'd met him).

We watched the film Carrington a couple of days ago. I'm afraid I found it the usual soft-centred British biopic, though with at least a smattering of vivid language and a few good one-liners - and Jonathan Pryce makes a living character out of Lytton. When Christopher Hampton's script stops making the characters utter platitudes, it can be briefly moving - it certainly is when Carrington (the always splendid Emma Thompson, though she has none of the artist's supposed sex appeal) roams the empty Ham Spray inconsolable and suicide-bent after Lytton's death. Thank God the Schubert Quintet takes over again from the overwrought Nyman score at that point. Carrington's pictures look very fine in the gallery shots you get as the credits roll; a one-woman show might be rather interesting.
Posted by David at 19:53

Based on a couple of references above, can I deduce that you are a duffer, or hopefully something even better? If so, and if you think you have one, what do you feel is the best aspect of your game? Were I a player, and though it would be nice to hit them long and straight off the tee, I think I would wish for a strong short game in particular in order to hopefully, on American courses in particular, try to avoid downhill putts and the chances one usually has to take with them!

Hoping, as usual, that this finds you well, and wishing you the very best for 2009,

J. V.Returning to our primary mutual interest, do I also understand you to now like another Hansel more than Miss Coote's?

Oh no, no golfer I, I assure you. My attitude to most of the clubsmen is Lytton's in the previous letter to the first one I quoted: 'their conversation is quite amazing, and when I consider that there must be numbers of people more stupid still, I begin to see the human race en noir'.

And no, Alice is still hyper-boy Hansel No. 1 as far as I'm concerned.

An Oxford student who blogs as The Teenage Theatre Critic prefers the other Hansel if I am not mistaken, but his raving about this Miss Diana Damrau caught my attention as I have not heard of her prior to now, unless I am _GROSSLY_ mistaken. I went onto that well-known Internet buying site to find out what might be on offer, and surprisingly found a good deal along with further favourable reviews. She was compared by at least one reviewer to Miss Natrebko?, and she was also placed in a line of German lieder singers that included Madame Schwarzkopf among others. I might therefore do well to return and listen to whatever clips might be on offer. The TT Critic saw both casts, and felt the one with Miss Damrau and Miss Silja in it the better, though he _HATED_ the production.

I am _VERY_-much looking forward to this big year for anniversaries, notably Handel's as you might expect! Even though, of course, there are numberous recordings already of Haydn's _The_ _Creation_, I am hoping that our hero might be _FINALLY_ asked to record it commercially, and that, if he does, he might ask we both know who to be his soprano, as she was with the SCO a couple or so years ago, though that performance was regretably not broadcast.

p.s. I tried to get that errant "b" out of "numerous," but obviously failed.

I've seen Damrau as Zerbinetta and Zdenka, impressively musical and well acted both, but I was especially surprised by her Salzburg recital disc on Orfeo, and her Lieder-singing abilities certainly shone through her Gretel. She's one of the current Met darlings, and there it seems she does compete with Netrebko - whom I'm much less fond of - in roles like Lucia.

Her Queen Of The Night has also been well praised, though I further read that she would rather not sing that anymore.

Since you mentioned her Zerbinetta, is there a recording of _Aridadne_ that you particularly like? A monaural Karajan seems to be getting a lot of praise, but I have been curious for some time about another monaural version, conducted by Dr. Bohm in the 40's with the composer, obviously not the one in the opera but the one who created her and, after a manner, the rest, in attendance. My next Strauss opera, if and when that comes, may be the famous Solti _Elektra_, and then maybe his _Frau_ _Ohne_ _Schatten_ or an _Aridne_. I recall discussing this with someone online not too long ago, and thus hope I am not repeating myself here.

p.s. Regretably I got the name of that opera, _ARIADNE_, wrong twice, and again could not properly correct the first typographical error, the second merely being some bad misthinking!

Oh, so many Ariadnes with so many virtues in different zones of the cast, but none that I know of perfect in every respect. I so love the Solti for its Prologue, with Troyanos the most flaming of all Composers, and the perfect Zerbinetta of Gruberova (if you like that sort of thing, which I now do much more than I used to). But then we're saddled with the veteran L Price, so good in parts but ultimately...

Always thought I'd want a greater delicacy than you usually find from Solti or Levine, but Jimmy has great casts and incandescent sound both on his DG recording - well sung down to the Nymphs - and on the Met DVD (Jessye, Battle and Troyanos as the ladies).

Possibly the safest bet is Kempe on EMI - if you warm to Janowitz's peculiar radiance, which I do.

I still feel it's a kind of Desert Island opera for me if pure pleasure is what one's after: we took the Levine recording to Naxos and played it over and over. Don Carlo is the other inexhaustible. But it's always horses for courses...

I have admired the late Miss Troyanos's work since I first came to know it through the then-future Sir Charles's recording of _Dido_ _And_ _Aeneas_, which, unlike his earlier Handel, seems to hold up well from a performance-practice standpoint despite modern-vibratoed strings and some slowish tempi. One of these latter is the famous "Lament," but has anyone sung it more movingly?! To my shame, I cannot recall any of the famous Miss Gruberova's work, but am currently inclined to share your overall inclination for the Kempe, the amateur musicologist in me wishing to have his expected division of first and second violins to his left and right respectively, which Sir Charles presumably would have done had he recorded this opera. And, of course, Maestro Levine also usually does this. To be sure, Miss Janoitz is, as is said, an acquired taste, but, if she sings there as well as I feel she does as Elizabeth in an early-70's live Sawallisch _Tannhauser_ as Elizabeth, I would be _QUITE_ content! I only know this opera a little, and that mostly the opera itself, not the prologue, but would be inclined to guess that, given the modest scoring, Strauss would have expected something more on the delicate side. Yet there are some _MIGHTY_-impressive singers in the other options you list, especially the two Levines.

Of course _Don_ _Carlo_, apart from considerations of casting, has another problem, which version does one choose? Mr. Robert Hugill, whose name and blog you might know and who is an arch-Francophile, is inclined toward the original five-act French version, though, from the reasonably-recent _Building_-_A_-_Library_ feature on this opera, we were told that Verdi preferred the four-act version, presumably in Italian. Begging your pardon for ignorance, do all versions have the controversially-enigmatic appearance of King Charles at the end? Until relatively recently, my operatic interests tended to concentrate largely on Wagner and English opera, but that has been changing, and I now have six Verdi operas, the sort of trilogy from the early 1850's and the last three original ones, divided between English and Italian versions. My next Verdi opera, if and when it comes, will be either _Forza_, _Balo_ or _Carlo_, not necessarily in that order. Yet I am leaing toward _Forza_, and the Levine recording. I know the three famous turn-of-the-century Puccini operas to a degree, but thus far only have my late mother's LP recording of _Butterfly_ with Madame De Los Angeles. I also have some French and Czech repertoire, most of that in OIE recordings.

p.s. Once again there are some spelling and other errors, which I am unable to edit and correct due to my reader's incompatibility with the colour and/or background of this field. I confess to not knowing what you use here, nor what combination works best with said reader.