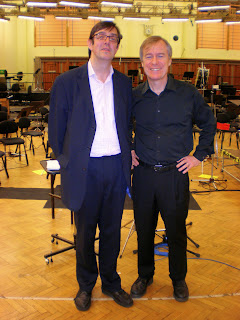 Here I am, a little dazed after an intense day's collaboration, with even harder-working conductor David Robertson in Maida Vale Studio 1. This was last Wednesday, when I presented my first ever Discovering Music for Radio 3 in front of a largeish audience and an even more sizeable and daunting BBC Symphony Orchestra. The subject was Prokofiev's Fifth Symphony, a work I thought I knew fairly well.

Yet by the end of the rehearsals and recording - 45 minutes of talk with examples, followed by a complete performance of the symphony - I realised there was much, much more to discover. I think it partly helped that the players had to go over their excerpts quite a few times, with the divided cellos especially finding increasing expression in the beautiful passage they play in the finale's introduction. Even so, it was undoubtedly a relief to find Robertson's view of the work as deep and dark tallying with mine. I've sounded off before other performances where I felt that the slick, showpiecey presentation went against the grain of what I'd been trying to say - especially true of a Proms telly interview before Sinaisky's hurried interpretation - but I can say hand on heart that this was the most probing performance I've heard of it since Tilson Thomas's: humanely phrased, broad without being pompous, sarcastic and biting without drilling home too much any 'Stalin subtext'.

The symphony was first performed, famously according to Richter's memoirs, just as a Russian victory over the Germans in early 1945 seemed in sight. So that, in tandem with Prokofiev's Sovietspeak radio broadcast proclaiming it as 'a symphony of the grandeur of the human spirit', have always rather worked against it being taken seriously as an ambivalent work switching from epic to caricatural mode, ranging from bright heroics to sombre lament.

It's not my place to rehearse here the thrust of the argument - that will be broadcast some time in the New Year - but I might just raise a few seminal points: why the big, aggressive triumph a la Shostakovich Five at the end of the first movement, not the finale? And why does the vast machinery ripping the heroic themes to shreds fade to a quizzical string quintet, piano and harps just before the last B flat major unison? Tussles over which key the first movement's lyrical second subject had veered into - it pulls two ways - revealed to us the incredible complexity of Prokofiev's harmonic sidestepping when he wants to write an unconventional melody and to avoid hackneyed turns of phrase. I also had fun underlining the devilish tritone, lucky to call upon orchestral pianist for the session Helen Crayford to demonstrate passages from the Sixth and Eighth Piano Sonatas. It was especially thrilling to hear the orchestra let rip immediately with the Romeo and Juliet excerpt and the very end of Shostakovich's Fifth Symphony.

And, yes, finally, I do think I gave a decent enough talk, thanks partly to the detailed preparatory work of R3 producer Chris Wines, though I had to put on a performance rather than my usual free ramble after I'd inwardly quaked while the orchestra rehearsed the fiddly snippets I'd set for them, not without a few grumbles. But the enthusiasm of several players at the end, including stalwart horn Chris Larkin and my favourite oboist, the incredibly humble Richard Simpson, made me feel that they'd learned something too. What a tough schedule, though - a full day of intensive playing ending in final retakes for BBC Chief Producer Ann McKay, with only short breaks for coffee and lunch. This is the sort of thing these heroic folk are doing every day of the week.
Posted by David at 15:15