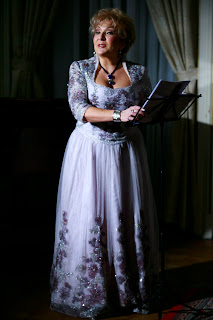 Thus they salute Nelly Miricioiu in her native Romania, and Romania came to London to hear a galleon of a recital in that country's gorgeous Cultural Institute (prestigious address 1 Belgrave Square).

Our Nelly, if I may be so frisky with this most vivacious of divas, is probably the only soprano these days who would lure me in to Bellini or Donizetti (I exaggerate slightly; I still didn't go to her latest Chelsea Opera appearances, more fool me, though sitting through Roberto Devereux in concert at the Royal Opera a few years back was worth it for the flaming last ten minutes). She has the detailed style of true bel canto so at her fingertips that every phrase even of recitative is supercharged with meaning and emotion. Who else is doing this now that Scotto's retired? I can't think of any other example.

I first heard Miricioiu in Edinburgh in 1981 when lovely Lottie - then the sloaney-seeming girl in red stockings who bounced around saying 'let's go to the opera' - organised a party of students to brave the cavernous Playhouse for Anthony Besch's Scottish Opera production of Tosca, conducted by Gibson (one of the few things he did really well in his declining years). She was the real thing alright, and a year or so later she came back as Violetta, singing an 'addio del passato' that's still branded on my memory.

Her latest recital needn't have been as generous as it was; fifty minutes of plums plus a bit of Enescu to keep that society happy would have fitted the bill, especially as she and her wonderful, super-experienced pianist David Harper returned their fees. But she kept us spellbound in what that eminent Hungarian Agnes Kory, one of a diverse crowd packed into the L-shaped recital room on the first floor of the Institute, described as a masterclass - working the room, knowing whom to address which song or aria to, moving straight into character for the big numbers, marshalling her energies (at 56, some beautiful sounds still emerge) yet never seeming to stint.

For me, the biggest treat of all was Elisabetta's gigantic farewell aria in Verdi's Don Carlo. Harper, giving us all of the solemn introduction, made it sound like Liszt in religious mood. And, oh, the expression on 'Francia' and 'la pace dell'avel'. That, moreover, after Rodrigo, two Donizetti songs, 'Bel raggio' from Rossini's Semiramide, two Romanian numbers by Nicolae Bretan and a tear-jerking Doina from an opera by Brediceanu.

Surely enough of a recital for any soprano. But that was just the first half. Enescu folk were disappointed that she sang only three of his seven Marot settings, but those were very touching in their direct simplicity. Then regal Meyerbeer, a Bellini mad scene complete with Callas tones at the start, and a stupendous Lady Macbeth double-salute. Apparently she sang the role with Chelsea Opera, where she has a splendid relationship with my very enterprising friends Duncan Orr and Christine Wheeler (how she greeted them with such a squawk of delight at the post-recital melee), and I missed it. Never again: I'll try to catch every masterclass - she's an inspiring teacher, I'm told - and every performance; the next is Adriana Lecouvreur with COG, and Ros Plowright down to sing the Princess.

Now that I've sorted out my downloads, and the computer is briefly behaving, here are a couple of amateur shots to complement the Romanian pro above. I did think it a pity that there don't seem to be any snaps of Nelly with her long-serving pianist, Herr Harper, and that the cameramen weren't in our corner of the room to catch the splendid mirror (a gift for a Marschallin or a Capriccio Countess, though neither are in Nelly's sphere). So here's our Diva in reflected glory with David a little in the shade at the end. 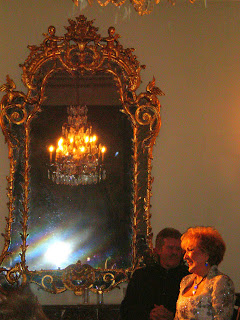 And finally, a photo of Nelly in another element at the reception with the enterprising Gabriela Massaci, head of the Institute. 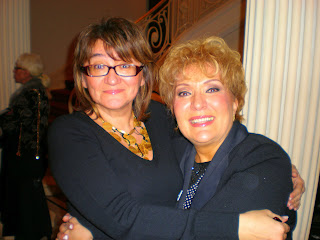 I'm very jealous- especially after the description of the 'Tu Che Le Vanita', which I think would be ideal in her (current) voice. I've never seen 'Adriana' live, so I'll look out for that. I think it will be safe to say that with those two it will be, at the very least, camp.

Miricioiu is, I think, one of the singers that our friends on the other side of the Atlantic dismiss with a shrug as being 'big in Europe'. Their loss.

Hello, Jon - how you made me laugh with your 'cheers (backs away)': and how wonderful that the feral Drew was capped by the totally rabid Harry. You couldn't make some of that stuff up.

Nelly certainly appeals to a certain sense of camp - but how she gets her audience going. I even heard myself giving out a loud 'ahhh' of approval when she announced her first encore ('Vissi d'arte', tearfully wonderful at the start) - something that usually makes me wince in others.

Nice to have raised a laugh, sah, always the aim... There are quite a few rabid old loons over on PB, admittedly, but there's always something to talk about too, I find.

(very odd to type 'PB' and mean something else, as someone who was a fervent Popbitcher back in the day)

I have a Miricioiu 'Vissi d'Arte' somewhere which EVERYONE who hears thinks is Callas- although I should stress that, just as you do not habitually 'ahh' at announcements of encores, nor am I often to be found hosting delightfully twee 'guess the singer' evenings.

Popbitcher?? That one passed me by.

I think I still have a complete Thais with Nelly on cassette, loaned by a friend of David Harper who then disappeared off the face of the earth. Maybe at last I should listen to it and try and transfer it to CD.

I did once do a 'blindfold' with two non-musical friends, playing them 'Casta Diva' sung by Callas and then by Nicola Kirsch, winner of 'Stars in their Eyes'. They preferred the Kirsch...