So I finally chose to forsake Tristan Act 2 - and Joyce DiDonato with the Talens Lyriques in Handel, a foretaste of which we were given at the French ambassador's residence on Friday - in favour of Messiaen's Vingt regards sur l'Enfant Jesus (a suggested translation is 'Twenty ways of looking at the Infant Jesus'). How could I regret it? This monumental cycle seems to be performed rather more often than its phenomenal difficulties and the enormous concentration span it demands from both pianist and audience would seem to permit. Yet, as with the Quatuor pour la fin du temps on Wednesday, I can't imagine hearing it played by anyone other than the artist(s) I heard at the Wigmore Hall - in this case, Steven Osborne solus.

He performed all riveting two and a quarter hours of the Vingt regards without a break (I could conceive one after the titanic central dance of 'Regard de l'Esprit de joie'). There are just moments, usually the slightly repetitive ones, where I find myself thinking of Massenet, Cecil B De Mille and Ed Seckerson's trademark phrase 'lurex music'. But Messiaen so pushed the boundaries of the pianistic possible in 1944-5 that one can only laugh (for joy) at the excessive cornerstones of the work, where Osborne always kept a steely grip on rhythm and overall shape. And time truly became space in 'Le baiser de l'Enfant-Jesus', in which he finally took the same transcendental role as that occupied by his colleagues in those three amazing movements of the Quatuor on Wednesday. It did enter my head to think both 'this is one of the loveliest piano pieces I've ever heard' and 'I could learn this!'...until the filigree birdsong and the massive cadenza-like passage drove all such notion from my head. Crikey, I couldn't play ANY of these pieces from start to finish.

Old friend Tom Pope and I stood at the end, of course - not just for Osborne's stamina, but also for his many voices, his orchestral command of every dimension and his tenderness. He seemed so normal and likeable afterwards, commending only the silence of the audience (by no means filling the Wigmore Hall, mostly men of a certain age). I now need to hear his recording. 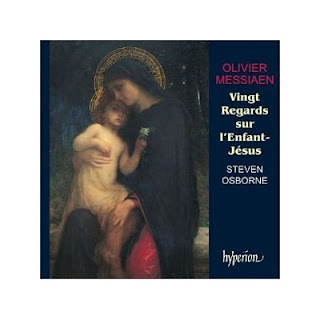 Mike Spring, pianist-seeker and -booker of Hyperion who encouraged us to go backstage and pay our respects, says it's still one of his two or three all-time top piano discs made by that distinguished label. I do hope they can grab Osborne and Gerhardt, along with the violinist and clarinettist of their choice (they've played with so many) for the Quatuor. Likewise, I don't currently want to hear it interpreted by any other artists.
Posted by David at 08:49

Joyce di Donato was fabulous by the way, and, judging from the applause, very much loved by the audience. Christophe Rousset's direction was perfection.

I'm sure she was. Rupert Christiansen declared her top of his ten divas for her performance as Donna Elvira in the Royal Opera Don Giovanni. I'm lucky I saw her in Handel's Hercules a couple of years ago.

I recently heard Vingt regards live for the 1st time ever, with this featured pianist. Having only vague memories of the Naxos recording for comparison, I came to the work basically fresh. She played very well, and was "in the zone" enough that when one side of the score ever so slightly threatened to turn of its own free will, she quickly punched that page back into place without missing a beat.