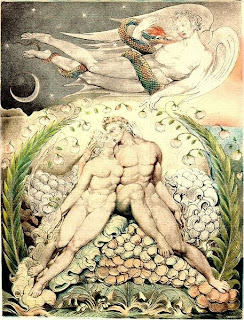 Today is John Milton's 400th birthday - and it was only just over a year ago that we celebrated the 250th of his perfect illustrator, as exampled above, William Blake (who seems to be something of a leitmotif here, I know not why).

All I want to recall are the circumstances of the time I actually read with pleasure the whole of Paradise Lost. Having been drilled in Books One and Two for A-level - too early, though I did relish some of the desolate scenes against which Satan poured out his defiance speeches - it wasn't until nearly two decades later, on a holiday in Basilicata and Calabria, that I took it up again. 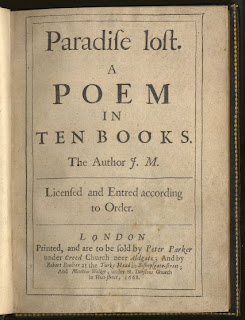 Serendipity struck when I discovered that, according to Norman Douglas in Old Calabria, Milton's chief source, Serafino della Salandra with his Adamo Caduto, came from Cosenza. We didn't actually stop there, but we'd already spent time walking in the Pollino National Park before I discovered this fact. And there, reading Paradise Lost, I'd been struck by how the great high plain beneath Montes Pollino and Dolcedorme, even on a brilliant autumnal day, chimed with the landscape where Satan held his Pandemonium; and how much more so the following morning, when the first snows were due and all the autumn colour had drained out of the landscape. Perhaps I'll be able to get a photo scanned by tomorrow, but the important thing is just to say many happy returns with an especially vivid memory.

Oh, and I still want to do a production of Comus up the enchanting valley near Ludlow where the revels are supposed to have been set.
Posted by David at 15:52