From funeral to jamboree, songfully 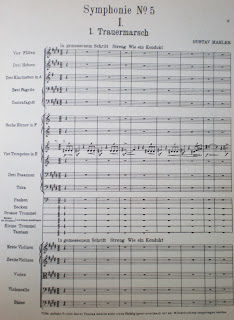 Two hours with my Inside the BBC Symphony Orchestra students on Tuesday weren't enough for Mahler Five, so I was a little worried about how I was going to whittle it down to forty minutes in the Barbican pre-performance talk on Saturday AND squeeze in something about Haydn's D major Cello Concerto.

Well, there are at least two ways of approaching this many-headed hydra among symphonies. You can believe Bruno Walter when he wrote that 'nothing in my talks with Mahler, not a single note in the work, suggests that any extrinsic thought or emotion entered into its composition' and simply follow the line of the 'heightened polyphony' which, Mahler declared, called for a renewed power of orchestration. Or you can trace the connections with the songs Mahler composed at the same time, over those two incredible summers of 1901 and 1902, and suggest more of a programme as the music moves from darkness to light than the ambivalent composer ever liked to admit.

That's the line I took, starting with that incredible solo-trumpet fanfare

which is to the world of the funeral march what Mendelssohn's Wedding March is to nuptial formalities (Mahler's in C sharp minor, Mendelssohn's in a garish C major). Interesting link, maybe: in February 1901 Mahler nearly died of a haemorrhage, while in March 1902 he married Alma Schindler. We heard Mahler's piano-roll performance of the opening before tracing it back to the Fourth Symphony when the unruly troops are marshalled back into neoclassical shape (the fanfare is at the same pitch).

Then it was the turn of the more inward march-proper for strings, connected with the most painful of the Knaben Wunderhorn songs about the drummer-boy on his way to execution, 'Der Tamboursg'sell' and the first of the Kindertotenlieder; both the songs in question were among the eight composed in 1901. That fraught second movement squeezed in by virtue of the vocal quality in its all-encompassing minor ninth, and the way Britten re-worked the whole theme in Grimes's 'We sailed into the wind' (what a performance from Pears).

The Scherzo, even though Mahler declared that it had nothing vocal about it, needed a bit of singing, from Deryck Cooke's examples. He uses them, as I did, to show how the opening Landler is more original and lopsided than it seems - how, in fact, it would sound as a regular 16-bar strain. The Adagietto: well, loads to say there - for a start, the love-lyrics which Mengelberg fitted over the melodic line, which you could sing at the speed of Walter's 1947 recording (7m35s) but not at Scherchen's (15m12s - that's the 1964 Philadelphia recording which also gives us a five-minute Scherzo; go figure). If it's a song without words, is it more about the retreat of 1901 ('Ich bin der Welt') or all for love of Alma in 1902 (connection between the end of the 'private' Ruckert song 'Liebst du um Schonheit' and the strings' final grand descent)? Is the radiant melody in the middle of the movement another lovesong, and if so, when it returns in the finale, is this Alma keeeping Mahler company in the Viennese hurly-burly? Why is the fugal tumult based partly on the Wunderhorn song about the donkey favouring a cuckoo's song over a nightingale's? And what about the chorale which finally conquers all, and which Alma didn't much like?

As for the Haydn D major, I handed over to Alban Gerhardt, who in a recent blog entry gives a cellist's perspective on why the work is so delightful to listen to but such a bugger to play. Came the performance and Jean-Guihen Queyras, photographed below by Yoshinori Mido, did indeed make it sound mostly easy and ineffably charming, with a radiant mid to upper range that projected sweetly in the Barbican (so, too, did the stylish body of strings - this hall is often more favourable to the smaller-scale). 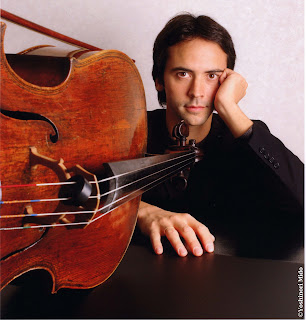 Though I'd noticed the fun interplay in the rondo between soloist, oboes and horns, I hadn't registered the slow-movement reprise with the leader, which Queyras played with introspective beauty. There's a relaxed suavity about the first movement which for me sets it above the C major, though I wish I'd heard that when Queyras played it the previous week.

Belohlavek's Mahler, unfolding over the years rather than crammed into a single season like Gergiev's, continues to astonish. His apparently laid-back spaciousness gave way to sheer adrenalin rushes at the ends of scherzo and finale, and he really knows how to let that awkward chorale make its mark on both appearances. Here he is in action as photographed by Clive Barda. 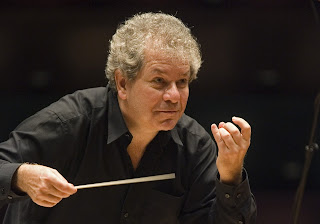 The brass playing was out of this world. You can usually tell whether the whole performance is going to work from the opening fanfare, and Gareth Bimson was unusually faithful to Mahler's injunction to make a quasi accelerando on the upbeat triplets, true to military style, before opening out to a penetrating brilliance. That was the hallmark, too, of Martin Owen's horn obbligato in the Scherzo; I've never heard the panic cry that temporarily stills the action more full-throated.

The more incisive the brass lines in the first three movements - and there are points where one can't help feeling Mahler has stuck in one episode too many for human comfort - the more impact comes from the strings and harp of the Adagietto. Sioned Williams's contribution as chords hung in the air made the music sound especially novel.

Yet there was one horrible shock as the final string pianissimo died away. I'd spoken at the talk about a frightful Scottish National Orchestra performance in which the conductor (Peter Eros) let the audience clear its collective throat before what, if Mahler's attacca is followed, should be the most magical horn note in the history of the symphony, ringing out in the silence. Having impressively created an expectant hush before Mahler's 'Part Two', Belohlavek now inserted the same break as Eros between Adagietto and Rondo-Finale. Why, I wonder? It seemed especially perverse as everything else breathed a clarity and a confidence you rarely hear in a Mahler symphony. Radio 3 is broadcasting it all on Friday 3 July.

One thing's for sure: Belohlavek's training over the past few years has given the BBCSO a focused identity it often lacked before. At its best - and this was certainly the best - it's easily comparable with the other London orchestras. Next season looks good: at last London gets to hear all six of Martinu's symphonies over the concert year - a chance missed at the last anniversary - and because none of them is much over half an hour long, that gives the cue for some intriguing balancing acts in each concert (four works for the first two in the series). I have to say that this excites me more than most of the latest Proms programmes - a marked contrast, or so it seems from my perspective, to the brilliantly successful risks of last year.
Posted by David at 13:03

Food for thought here. Did you hear the Mahler Third they did some seasons back? Amazing - especially the lady trombonist and the offstage posthorn.

I'll be sure to listen to the broadcast.

Yes, that Third was Abbado-class. The 'lady trombonist' was Helen Vollam, best I've ever heard in the first movement, and it was a pleasant surprise when the 'posthorn' player came out to take a bow and turned out to be Martin Hurrell, who's come to our classes several times with his delightful and brilliant girlfriend, pianist Liz Burley.

The point you make about spreading the Mahler symphonies is certainly valid. Here in NY we've just had a cycle shared between Barenboim and Boulez, and I don't know whether that does anyone much good.