Music to watch films by


‘If you’ve enjoyed Cheri, tell all your friends’, declared the very professional MC at the Cine Lumiere screening of Stephen Frears’s new film last Wednesday, ‘and if you haven’t, keep quiet.’ It may have been because we were a bit quiet at the reception afterwards that a delightful French lady felt obliged to step in and say, ‘well, you know, it is very much a woman’s film’ – as if women were less discriminating than men, and as if the Colette original weren’t a timeless, universal marvel – and ‘but wasn’t the music wonderful?’ Well, I found it de trop, overblown when not tootling archly – and how much of it there was (several orchestrators were credited).

By the same token, how much of it there is in an altogether more authentic French drama, Arnaud Desplechin’s Un conte de Noel (A Christmas Tale); and yet how wonderfully this collage of diverse sounds and scores not only enhances the film but sometimes even seems to dictate its emotional rhythm. 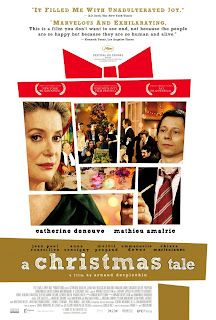 Obviously Mendelssohn’s Midsummer Night’s Dream Overture and Intermezzo play an important role, but I wish I recognised the bittersweet berceuse that pops up at very diverse moments (it might, of course, be a new theme by the soundtrack's composer, Gregoire Hetzel). It makes an unexpected return, counterpointed with jazz, to calm the nerves through the final scenes, when Deneuve’s matriarch undergoes the bone marrow transplant provided by her splendidly dysfunctional black sheep of a son (Mathieu Amalric). I haven’t been so haunted by music as an integral part of a film since the sombre, ultimately transcendent use of Rachmaninov in a Swiss movie, Garcon stupide.

Which justifies a brief digression, as I just (13/5) found an eminent musician who felt the same about Garcon stupide and Rachmaninov. Pianist Jeremy Denk (whose Prokofiev Visions fugitives was perhaps for me the highlight of the Bard Festival last summer) writes on his idiosyncratic blog think denk of the last scene. In it, to give a bit of context, our hapless hero may or may not find happiness in a fairground... 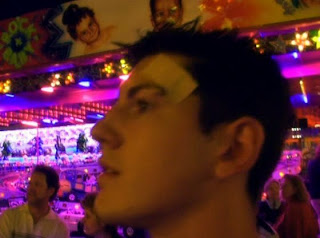 ...and the unearthly beauty of the slow movement from the First Symphony plays at length (I'm sure for more than two minutes). Denk writes eloquently: 'The concluding two minutes of the film seem musical, not by accident, but in essence. The onscreen events are reticent to declare themselves (”I am a happy ending” or “I am a sad ending,” or even “I am an ending at all”?), and they take refuge therefore in the music (which cannot really declare itself either); the two enigmas are tied to each other, timed as a gradual release and disintegration, an unfolding of images and motives.'

But back to A Christmas Tale, the plot of which gives very little idea of the film’s unique, dreamlike quality – indeed when I read about it at the time of last year’s release, I wasn’t tempted. Yet it’s a real one-off, a kind of gracious French Bergman family drama in which sadness or misery dissolves at the lightest of pressures. And what wonderful performances Desplechin draws from his ensemble of accomplished actors. One who lights up the screen in all her variousness is Emmanuelle Devos, a name I blush to say I’d not come across before. Her character, the black sheep’s girlfriend Faunia, is by no means a dominant figure, and yet her expressive range is utterly compelling. So I’m looking forward to catching up with another Desplechin film in which she plays a major part, the highly praised Rois et reine.

And Cheri? Well, it’s a step up from Frears’s excruciating Mrs Henderson Presents, but none of the characters seems quite right for Colette’s lethally elegant novel – though Rupert Friend’s petted young roué comes close – and none won my sympathy. Michelle Pfeiffer can be luminous, but she’s resolutely unsexy: didn’t Frenchmen like their courtesans with a big bust and an ample derriere? ‘Nice hats’ is the best I can do.

PS - accents: where are they when you need them? As my laptop doesn't have a 'separate numeric keypad', I'm at a loss for an alternative. And I've tried.
Posted by David at 12:58