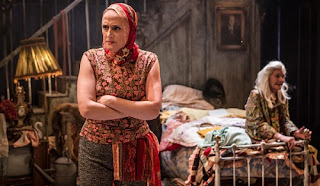 A second viewing of the Maysles brothers' classic 1975 fly-on-wall documentary Grey Gardens after seeing the musical at the Southwark Playhouse makes me wonder whether Edith and 'Little' Edie Bouvier Beale were no more than fleetingly in distress. These one-time socialites now seem more like independent-minded women doing their thing in the dilapidation and squalor of their bohemianised Long Island mansion. And what lovely eyes they both had. 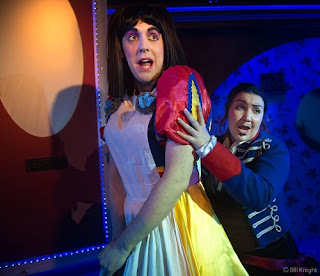 In Charles Court Opera's pantomime Mirror Mirror at the King's Head, which came to an end just after the Christmas season, Snow White was a six foot four dame more than able to look after herself. There, I've tried to justify the links, or not, between two shows with accomplished singer-actors carrying material of varying qualities. My thanks to theartsdesk's resident photographer Bill Knight for the pantopics, and to the Southwark Playhouse photos of Scott Ryland. 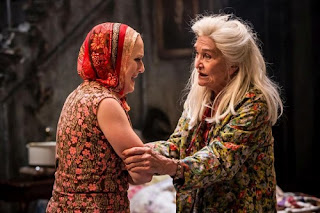 If you hadn't heard - and a lot of my friends, unlike adorable Jinkx Monsoon on RuPaul's Drag Race, had never even come across the original - Grey Gardens got turned into a musical giving the Ediths more of what they'd always wanted - more song, more dance. It finally arrived at the Southwark Playhouse with two consummate showgals in the lead: Sheila Hancock - whom I well remember as Mrs Lovett to Dennis Quilley's demon barber in the London premiere of Sondheim's Sweeney Todd - as Edith senior in her old age (Ms Hancock is 80, and still croons rather beautifully), and a personal favourite, Jenna Russell, of whom one can usually only sigh 'lovely lady, lovely lady' as my favourite teacher Mr 'Tibby' Bircher used to do over Desdemona. Here she's only a little bit lovely, but very funny, in a double act as Edith in her prime and 'Little' Edie past hers. 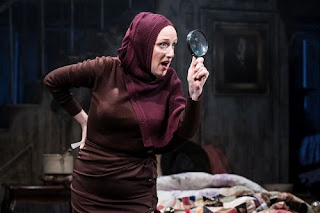 The headscarved, self-styled revolutionary fashionista was a good deal more softly spoken in real life; Russell does a hilarious version which often veers into Australian. No matter; she gets the best number, the opener of Act Two, alongside which the rest tends to be either nostalgic pastiche or sub-Sondheim patter with some infelicitous rhymes and stresses. Composer Scott Frankel is pretty good, but Stevie he ain't (who could be when such geniuses only come along once in a lifetime?) and if Doug Wright's book along with Michael Korie's lyrics are aiming at the sophistication of The Philadelphia Story in Act One, they don't come close. As for the slice of life that is Grey Gardens the documentary, amazingly it's all on YouTube, though can't be embedded, so follow the link here. A still, in the meantime, will have to suffice. 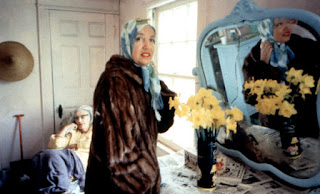 Nevertheless the crazy-family set-up which gives some kind of context to the 'prologue' - a whole act - of 1941 is well enough portrayed in the clutter of Thom Sutherland's slick Southwark production, and though I didn't much care for the token camp bunged into the script, Jeremy Legat as George Gould Strong, Edith's resident musical genius, sure could play, act and sing. Not so certain about Young 'Little'/'Body Beautiful' Edie in the somewhat strident tones of Rachel Anne Rayham - surely nobody needed mikes in that place, stuck on their foreheads like unbecoming tikka marks - but she had a neat song-and-dance number, a bit reminiscent of Street Scene's 'Moon Faced, Starry Eyed', with the dashing Joseph Patrick Kennedy Jr of Aaron Sidwell ('somewhere in Athens a plinth is missing its statue' got the measure of it). 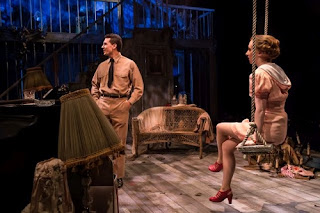 Act Two needed better torchsong numbers, but Hancock did carry off 'Jerry [the boy who visits and does small kindnesses for the recluses, also played by Sidwell] likes my corn' . Didn't think much of 'Around the World' or 'Another Winter in a Summer Town', and the sentimental ending dragged; the real crux was 'Little' Edie's cri de coeur in the climactic argument - dialogue, regrettably - where Russell's ever-impressive truthfulness kicked in. Not the greatest of musicals, then, but a real treat at close quarters - and what a luxury to have such an excellent nine-piece band under Michael Bradley (can they make any money at the Southwark Playhouse?). 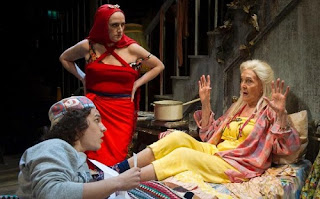 I love that part of town, Borough heading on towards the hopeless case of the Elephant and Castle, and I love Islington in the patches which aren't chain restaurants and cafes - to whit the King's Head Pub and Theatre where we used to go for supper and shows of high quality, and where we now try to catch everything put on by charismatic singer/impresario John Savournin and his Charles Court Opera. After his triumph as a 'Judge Judy' of sorts in an hysterically funny Trial by Jury,  Savournin gave us Snow White the Dame, mourning her late husband Barry and subsequently the murder of dwarf  Half Baked. 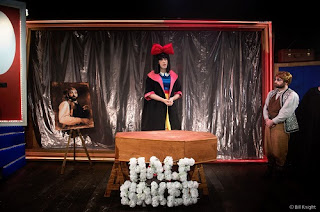 That naming's a result of one running gag - that Disney's copyright-crazed heirs don't like the original names to be used, so out went Dopey, for instance. All seven, being impersonated by Matthew Kellett, never appeared on stage at the same time until the curtain call. 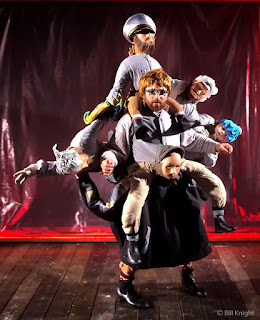 Here's a joke I rather like, not that it featured in the panto: did you know that six out of seven dwarfs aren't Happy? (Audience groans). 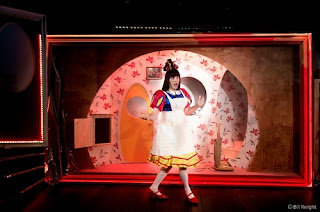 As we know, this is a highly professional, energetic company of opera singers who do pretty good dance routines to boot; as J said, you can't fail to like them and laugh along. Lovely work, as always, from Amy J Payne as the Prince and Nichola Jolley as her Dandiniesque sidekick, destined for frogdom. All the ingredients of traditional panto were here. I imagine Savournin has studied the doyen(ne) of pantomime dames and script writers Eric Potts, who held his own alongside Dame Edna Everage in Wimbledon's superb Dick Whittington. There were the necessary couplets, the obligatory kitchen-chaos theme with audience participation, asked for or not, 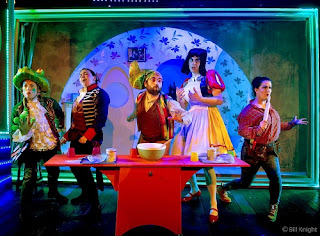 and while I missed the evening performance not having any kids among us, I'm very grateful to the company for singing 'Happy Birthday' to Dancing Delice aka goddaughter Mirabel when she went with her little friends for a matinee before Christmas. Mother Edsy has seen the show four times, and I can see what appealed to the animal-dressing artist in the glove-puppet backing group for two numbers which made us roar with laughter. It's also all too easy to forget that the entire show is carried by five talented performers on a tiny stage and a master musician at the keyboard(s). Onwards, then, CCO, and may we see your Patience soon, pray.
Posted by David at 17:26

Haven't thought about the Grey Gardens documentary in a long time. Fascinating subject and very well done, as I remember it. Speaking of fascinating, must also thank you for the tip-off about the Zweig biography, which I am reading now. An examination of exile through a very interesting lens.

I came to the doc only a few years ago, hadn't even heard about it. Not sure that there was much art in it, just slice of two very singular and amazingly articulated lives. Though the filming of the old portraits etc was well done. I imagine folk will either switch off after 20 minutes or keep going if the humanity of it all grabs them.

No Panto for us this year! I'm feeling very deprived......

Indeed - and as I wrote, this played by most of the rules while being subversive in not having young juve lovers singing cheesy songs. Wimbledon, apparently, disappointed this year. No draws like Dame Edna or S'wEllen.

And what of Grey Gardens? Surely you two are afficionados. I can't imagine a gay man who doesn't identify with campy-coy 'Little' Edie just a bit.

David, though I have not seen the stage version, nor the film made with actors, I did go to the theater in the 70's, to watch the original documentary with my friend G. I wish that I could have, at that young age, been more philosophical about it, seeing it as their choice to live in a place and style others found eccentric and, moreover, awful. Because it was presented, as I recall, as a terrible discovery, something that well-connected and monied relations ought to do something about, it was shocking to us. We had not been exposed to any lifestyle quite so alternative. It was not, however, upsetting enough to make us leave. To the contrary, we were riveted, unable to take our eyes off the screen, watching with increasing disbelief, as Edie appeared in scene after scene, sporting a bedspread as a skirt, wearing a sweater vest in the regular way, and later on her head - unless she had chosen a dish towel. Though normally a polite and attentive audience, we were also good and old friends, who would usually at least glance at each other expressively, push one another's arms, or even whisper a quick remark. Grey Gardens left us stunned in silence, a silence which left the theater with us. We moved speechlessly to G.'s car, got in, and she drove off, down a side street through the night. Suddenly one of us broke the silence. Someone said, "Dish towel," or "Sweater vest," and that was it. We dissolved into convulsive laughter. We didn't find the movie funny - the laughter was from pure nerves. G. had to park, unable to steer, and we sat in hysterics, until she finally pulled herself together. Then we were not allowed to say anything, until safely home.

It was a long time, many months, possibly a few years, before the effect of the film had drained out of us. We could just say Dish towel, or Sweater vest, and get hysterical again, the way we had done over shared comedy, throughout childhood. It does me good to learn about another way of viewing how the ladies chose to live. Freed from the context of inexperienced notions about the one and only way to do so many things, their story does seem independent-minded and bohemian, just as you point out. And, thanks to your mention of the delightful Jinkx Monsoon, I have now seen "The Revolutionary Costume For Today," which gives me a big smile! -- Elizabeth

A fascinating take, Elizabeth, thanks so much for sharing that. I can imagine the shock. In truth, the filth and stench of the place must have been awful. Living with Little Edie on a day to day basis would probably drive one literally mad. But somehow I couldn't see it this time as sad.

On the other hand, I remember seeing Paris is Burning, about the drag groups of, was it 70s or 80s New York who led the way in 'voguing' amongst other things, and feeling so uplifted when I first saw it. Whereas watching again filled me with a terrible sadness, for the fates of so many of those boys. RuPaul's Drag Race, which owes so much to that film, shows us how far we've come that so many people of any persuasion can enjoy such talent and entertainment.