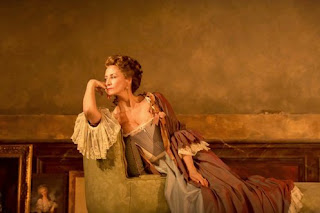 She's a real villain by any standards, a manipulatrix who seems to take active pleasure in ruining people's lives. And yet you have to be fascinated by the gameplayer, the actress in Choderlos de Laclos's Marquise de Merteuil. That I would be spellbound by the characterisation of Janet McTeer in Christopher Hampton's adaptation of that peerless, ultimately profound novel Les liaisons dangereuses at the Donmar was almost a foregone conclusion: this woman has consistently amazed, in the wonderful Sam Shepard play Simpatico, as the Duchess of Malfi, Mary Stuart, Petruchio at the Globe and above all Nora in A Doll's House, which I still count among the handful of most shattering performances I've ever seen. You can read my review of the latest triumph on The Arts Desk (production photos here and there by the excellent Johan Persson). 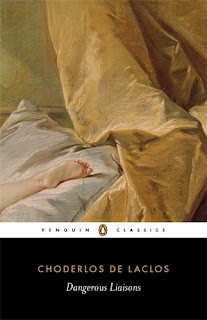 That I would find the novel even more extraordinary - where has it been all my life, or where have I been, unintentionally avoiding it? - took me more by surprise. It shoots to the top of my list alongside War and Peace and Don Quixote (I think I'm allowed three), books I could read any number of times with pleasure. And pleasure is still the word despite the appalling machinations of the Marquise and her not quite so sharp-witted accomplice the Vicomte de Valmont, who either tyrannises women or is enslaved by them (that was maybe why there was a touch of the bovine about Dominic West's performance. How I'd love to have seen the late, great Alan Rickman in the original cast, not to mention Juliet Stevenson).

In Laclos one finds the most devilish tricks wrapped up in the most elegant language (Helen Constantine's Penguin translation, I'm guessing, must be a good one; I only wish my French was good enough to read the book in French, though there's still time). What is the writer's declared aim? 'To unveil the strategies used by the immoral to corrupt the moral' through a series of letters in which the principals, loving enemies and co-conspirators, never meet. Hampton did a magnificent job in turning that in to drama where they do meet. But his achievement has to be a long way from the book itself, and above all its magnificent portrait of the self-contradictory anti-heroine, who is always cleverer than her male counterpart. She wants to play the goddess with human puppets on a string, spelling out a hubris which must be punished; and she says her aim is to wreak revenge upon men, but she seems to amuse herself just as much in destroying the women who are always the victims as she follows Gresset's maxim 'Fools are on earth to keep us all amused'. 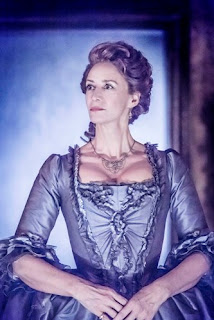 The heart of the book, to explain if not condone the lack of heart, is Letter 81, where she analyses Valmont and sets herself apart.

Tremble, above all, for those women whose minds are active while their bodies are idle; you call them 'sensitive' women - who fall in love so easily and overpoweringly...They are imprudent creatures, for in their present lover they fail to perceive their future enemy.

But I, what have I in common with these empty-headed women? When have you ever seen me break the rules I have laid down for myself or betray my principles? I say my principles, and I use that word advisedly. For they are not, like those of other women, discovered by chance, accepted uncritically or followed out of habit. They are the fruit of my deepest reflections. I have created them, and I can say that I am what I have created.

The Marquise goes on to give Valmont and us her history, how she concealed beneath a society mask her thirst for a knowledge which, had she been politically powerful, could have been put to better use. There was no proper outlet for women like this. If only Merteuil had become queen and not Marie Antoinette, whose tragedy as a pleasure-loving mediocrity is ruthlessly outlined by Stefan Zweig in the biography I've just started. 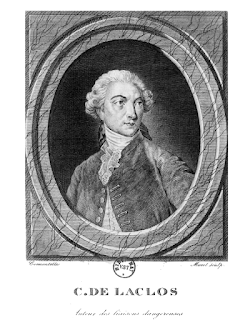 Later Merteuil allies the past with a knowledge of fading beauty in the present, the only possible power that a middle-aged woman can hope for. There is some pity in this, and Laclos wrote several treatises on the education and (lack of) rights of women after finishing Les liaisons dangereuses. For this quotation from one of them I'm grateful to Constantine's introduction:

Interesting man! I must search out a biography. But in the meantime Zweig on Marie Antoinette must lead me sadly forward to the end in which she rose at last to some stature.
Posted by David at 16:11

Yet another nice trail of crumbs you've set us to follow here. I've got one more Arden to get through, of Henry IV, Part 2, first, but, prompted by your earlier earlier post, I've already put the Zweig biography on order at the library, and now see I must add Zweig's bio of Marie Antoinette. Janet McTeer is wonderful, isn't she? This seems a perfect role for her, too.

'Miettes qui tombent' as I remember from one of the fairies' variations in Act 1 of The Sleeping Beauty. I'm actually keen to return to, was it Sophia Coppola's film of Marie Antoinette as valley girl after I've finished Zweig - it will make more sense.

Did you know I played Mistress Quickly in Henry IV Part One in my first year at grammar school? There's incriminating photographic evidence to prove it. I was a rather buttoned-up hostess visually, and probably didn't do a Cockney accent either, but the audience got a good laugh when I was supposed to be laughing at Falstaff's raillery and I went to sit on a bench that wasn't there...not in the direction.

And I think our school production had some better performances than in the one you're going to see...with the Hotspur (if it's the same one) it wouldn't be difficult. Ours was excellent - I remember his name, Moray McKay.

As for peerless Janet, you can see the Donmar Liaisons livescreened (I presume it's transmitted in the US like much else) on 28 Jan. Not to be missed.

Perhaps Mme de Pompadour was talented? And I do not mean only in bed. As maitresse en titre she was in effect queen. And Marie Antoinette had some talents. Comments on such as these tend to be biased by a dislike of the system as a whole

Great to read this David. I thought you might enjoy a contemporary engraving of the latter part of Letter 71

David: undoubtedly these women were talented, but had no real outlet for their talents that didn't spring from the bedroom (in Madame de Pompadour's case) or from being pretty and lively (I'm amazed by the perspicacious letters that Maria Theresa kept sending to her giddy girl, begging that she'd apply herself and take care of the wider world around her). Mme de Stael proves a notable exception.

Sebastian: this engraving and others liked it I toyed with using to illustrate the piece - but of course they titillate the male readership with ladies' tits whereas Laclos does nothing of the sort. whatever free rein he may give to the imagination.

David: Love the anecdote. You might enjoy knowing that, as a first grader, I played the Mouse King in our Nutcracker. Striving for verisimilitude, I did not get up from the floor after being slain, and the teacher had to prompt me that the scene had ended, and I needed to get out of the way.

Accompanied by what, Sue? A school orchestra? Or was it a play version of Hoffmann's story? Our primary school band for HMS Pinafore consisted only of an army of recorders, six cellos, percussion and piano. It saddens me to hear even of contemporaries who didn't learn music with the Dolmetsch descant recorder and method. We all enjoyed it, I think.

It was a classroom "production," so the music was on LP, and I wouldn't be able to say which one. I love the idea of HMS Pinafore with that instrumentation. I don't recall ever playing recorder, lots of percussion though, triangle, blocks, tambourine, all that.

Ah, right - we did a 'music and movement' show to numbers from Peer Gynt - for some bizarre reason the grotesque Dance of the Mountain King's Daughter was illustrated by a peaceful Norwegian village scene. I was a tailor, and my mother put a piece of black felt over the 'Portugal' label on the cap I'd been given by a neighbour.

Percussion is OK, but of course the recorder helps you to read music, and because the plastic instruments were so cheap, the entire class had one. Three cheers for Mr Soper, our kind and gentle music teacher.

Surprised to hear you missed most of the snow in Poughkeepsie. Meanwhile, my friend Mary in Chicago keeps posting very dramatic pictures of life outside her window.

Mme de Pompadour was active in state affairs, however she got to her position. She remained influential for many years. She played a role ( with Maria Theresa) in the reversal of alliances which tried and failed to bring down Frederick the Great. [And with the Empress Elizabeth as the Autocrat of Russia Europe was rather run by women in those days ] La Pompadour was also a patron of Voltaire. One has also to recall that marriages at high levels were arranged for political reasons, so that the king would look elsewhere than to the marriage for a companion, often in a mistress.

Laclos was with Talleyrand a member of the Duc d'Orleans inner circle. Laclos must have been talented and perhaps an attractive character, as he rose to move in society at levels perhaps surprising in view of his bourgeois birth

Maria Theresa is becoming a more and more extraordinary figure in the Zweig biography. So far she's not seen her daughter once since the marriage - isn't that one of many bizarreries about Marie Antoinette's story? All the more so because her letters seem so real coming from a loving but exasperated and helpless mother - and of course horribly prophetic too.

Well David thank you again for these excellent book reading suggestions. Recently friends of ours were visiting Princess Rita Ludovisi Buoncompagni in Rome, she opens her house on invitation for guests to see her Raphael ceiling and other art works. She also discovered in an old suitcase a stash of several letters signed Marie-Antoinette. Letters to friends and supporters a few years prior to the revolution, she had a beautiful hand and it is quite easy to read them. Her French was also very elegant as befit a Queen.

That's a good name to drop, Laurent - straight out of the world of La grande bellezza. That Marie Antoinette had many sides to her, I'm learning from Zweig, despite his insistence on her being essentially a rather ordinary woman blessed with beauty and a light step.