High lights in the West End 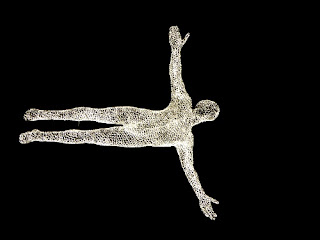 Highlights, too, of Lumiere London 2016 (reported over on The Arts Desk, but with photos by others), one of Cédric Le Borgne's Les Voyageurs flying high above St James's Square, and the jellyfish by Janet Echelman called 1.8 London floating over Oxford Circus. 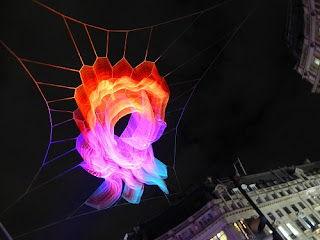 The palm for the light spectacular, at least monumentally speaking, has to go to Patrice Warrener's The Light of the Spirit on the west front of Westminster Abbey. 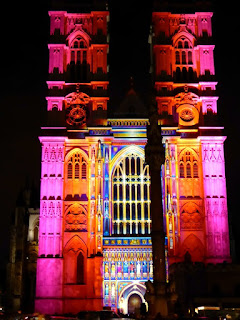 With 31 installations shared between Mayfair, the West End and Kings Cross, the experience was bound to be hit and miss. Our own trail on the Friday night took some time to yield wonders - proceeding from Lumiere's VIP HQ, we hit the light fantastic at Keyframes figures climbing up a Regent Street facade. Good to see the thoroughfare closed to traffic, but was there enough going on here? 1.8 London looked nothing from a distance - I was to find out how wrong that impression proved on Sunday evening - and there were modest pickings around Carnaby Street. J told me Elephantastic worked better on a bridge in Durham than it did above the arch near the Regent Street curve. 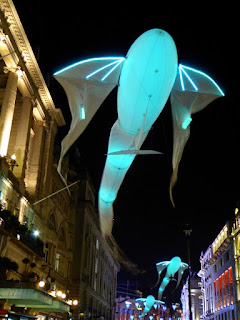 Then, however, we hit Porté par le vent's barrage-balloon fish Les Luminéoles swimming above Piccadilly like some sort of phantasmagorical celebration of Chinese New Year. Kids gaped in wonderment and so did we - this time the pedestrianisation proved a triumph. Shame about the blaring Harry Potteresque music. 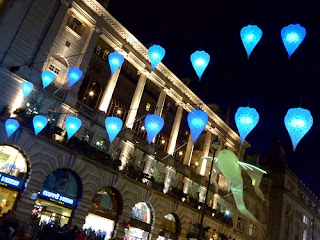 Having taken an unimpressed look at NOVAK's 195 Piccadilly, we followed the Voyageurs trail from St James Piccadilly 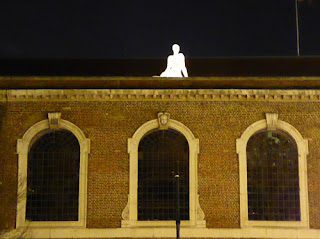 downwards to the Square I hardly ever walk through (not a member of the now-exorbitant London Library, you can tell). A cold, clear night with a half moon gave the figures a goal to reach 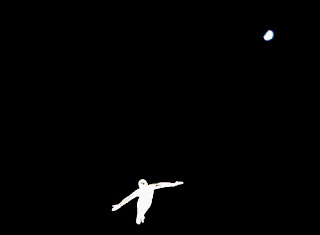 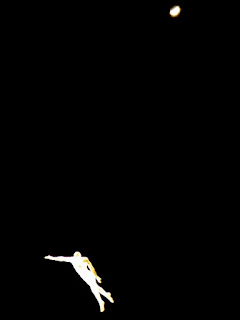 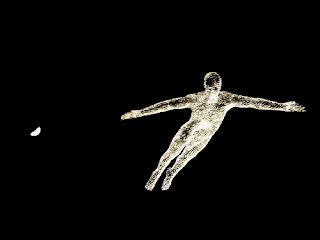 and I also wondered if the buildings were normally illuminated as well as this. Certainly the Theatre Royal Haymarket glowed in its rightful perspective from one of the Square's exits. Trafalgar Square was underwhelming, Centre Point's neon sign taken down and squatting in front of the National Gallery, but Leicester Square's garishness was well served, as I've already pointed out in an earlier blog entry, by TILT's Garden of Light. 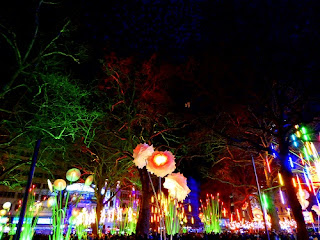 No harm in reproducing the giant ?peony? blooms again, this time by flashlight. 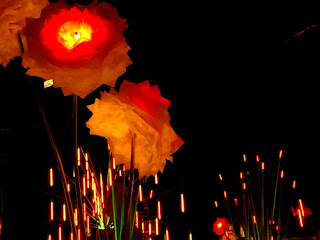 That was our early evening stroll done before going up to supper in Primrose Hill. The couch potato would not acquire legs for a Sunday evening attempt to catch up on the rest, but I was glad I went, and phoned from Westminster Abbey to say he had to come and see this. 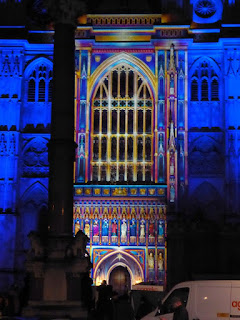 For the first time I looked properly at the 'martyrs' placed in the previously empty niches above the west door back in 1998. 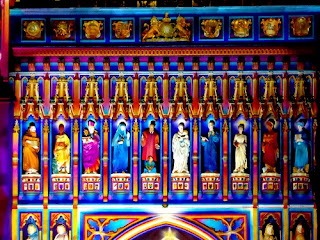 Nice, also, to bump into three people I knew, have the admiration compounded and be told what was worth seeing of the rest. 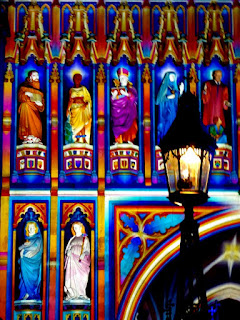 I took the Victoria Line up to Kings Cross, where a whole procession of lightshows was to be seen on the walkway up to Central St Martins, but there was such a static queue in the tube tunnel that I turned turtle and took the southbound train to Oxford Circus. Which turned out to be the right thing to do, since 1.8 London proved a wonder close up. 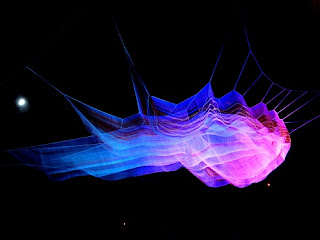 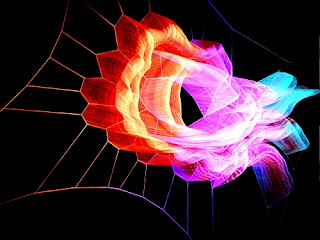 Green-jacketed stewards were yelling through megaphones that no-one should stop on the pavements - a reasonable enough request, as it turned out, since you could do what you liked in the roads and on the Circus itself.

I thought the Grosvenor Square zone would be less crowded than the rest. I was wrong, so I did a quick whizz around the neon birdboxes of Sarah Blood's Sanctuary and avoided the throng in the Square itself, which was fine since Ron Haselden's Brothers and Sisters could be seen perfectly well from the other side of the railings outside the American Embassy. 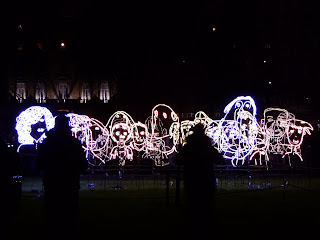 And in a last bout of mad indulgence, I let myself get hemmed in by the crowd pressing forward to see Aquarium in a phone box by Benedetto Bufaino and Benoit Deseille. Very good-natured it all was, with children refusing to believe there were real fish in the booth until they got closer, and one Scouser on his mobile phone saying 'I don't know exactly where I am, but I'm standing near a phone box with fish in it'. 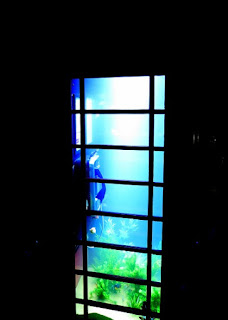 So I squeezed along and got a close-up glimpse before taking the No. 10 bus home. And that's not quite the end of it, because there will be a Lumierisation of the Guildhall on Shakespeare's birthday.
Posted by David at 11:20

Such a luminous parade of delights, David. Thank you so much for the virtual tour. Westminster Abbey must have been truly splendid to see lit up like that.

And an incandescent happy birthday to you, dear Sue.