ENO: Stage Management next in line for cuts? 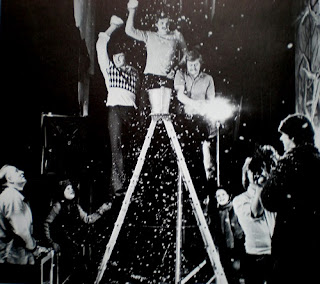 So it seems - but a climate of fear within the company has prevented this being the post it should have been. If matters change, I'll change the text. But the fact remains: the Chorus has had a voice and now we'll all be called upon to support the Stage Management (not pictured in the above scene from The Magic Flute. That's a rehearsal for Bergman's film - the great man pictured on the left: the only version I've ever seen which caps dramatically, though not musically, what they did at ENO this time round).

In the meantime, so many journalistic speculations about Mark Wigglesworth's departure are either lopsided approaches to the truth or downright false. Why does none of these people ask the music staff, chorus, orchestra, technical staff or at least check facts? Immediate reporting of the news in the broadsheets was balanced and responsible. But opinion pieces from Rupert Christiansen, Charlotte Higgins and Norman Lebrecht have all been to some degree wide of the mark (surprising from the first two, though not from Slipped Disc; way too many people in the music industry use it as a sort of gossip bible). I understand we can expect some counterbalance from Hugh Canning in the forthcoming Sunday Times.

All the following statements are FALSE:

Wigglesworth was sour about Ed Gardner getting this season's Tristan and Isolde and canvassed for the most expensive productions (Lady Macbeth of Mtsensk and The Force of Destiny were planned before he took up the Music Directorship. And he has always categorically stated that it did not matter which operas the MD conducted).

He looks down on Gilbert and Sullivan; the defendant is a snob (a fact deduced from an alleged unwillingness to participate in endless Mikados - see last sentence in above paragraph for contradiction. And during a recent performance of  that indestructible Miller production, MW was sitting in front of me and commented on how difficult this work of genius was to do well).

He left because he wanted the Artistic Directorship for himself (how he longed for someone in the post with whom he could work - he felt, like so many of us, that had there been one in place none of this nightmare would be happening now).

The Board and the CEO tried every other possible route (they arrogantly refused to do so. Details of Wigglesworth's alternative plan have not emerged, so any judgment that it was 'overambitious', as the Board is claimed to have responded, would be premature).

I repeat: just ask any member of the company what he's meant to each and every one of them. The rest is flummery. In the meantime, Wigglesworth is wisely stepping back until the furore dies down. Then we can expect more honesty and directness. Praise be to the Easter break for allowing us all to get away from the constant stream of information good and bad. And yes, I appreciate the irony that I'm adding to it here. But the latest stage in ENO's dismemberment needs flagging up as soon as possible. It shows all too clearly where the management will send the company  - down the tubes. Is political intervention now the only hope, or can that come from an uprising within?
Posted by David at 22:01

Without taking away from the special factors in the ENO case, I can only add that this careless( if not worse) reporting is pretty typical of the media. Over many years I have seen reports that personalise, seize on controversies ( whether they exist or not), over dramatise, and elaborate some snippet of a comment into a powerful false statement. For many or even most the excitement an newsworthyness of the debate is the important thing, not the truth. I once sat next to an impressive young woman who said she was deciding what angle to take on the radio about a certain event. I suggested that she should just report the facts as they appeared. She pointed out to me, obviously a poor amateur, that if they took that approach they could not possibly get a good programme. Calling Wigglesworth a snob is wonderful copy

The pursuit of truth is a hard and mostly thankless task, but it has to be good in the long term. Slight analogy here with the Prokofiev biog - before Vol. 1 was published I kept being asked what 'angle' I was taking. And I replied - it became a bit glib after a while - that there was no one angle, only many.

The snob ref, you gathered, is mine, a quotation from 'Trial by Jury'.

I must say I'm surprised at Rupert. A riposte to false claims is imminent in that not so august publication.