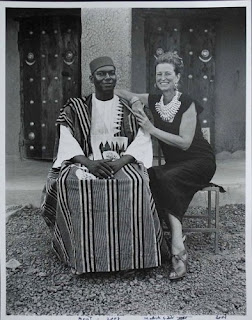 Gone far too soon, but Keita lived longer than anyone ever expected since his second wife and loving partner of 10 years, our Sophie Sarin, went to the ends of the earth to find cures and stavings-off of the myeloma that gradually, with remissions, wore down his resistance. She was trying, with expensive medication from India, to the last. A French drug wrought miracles for about a year.

I trust Keita's Malian family, including his first wife by whom he has two children (update - three, Sophie tells me below, proving how much time has passed), realises all that. For one thing especially they owe Sophie eternal gratitude - that the treatment she sought out in Casablanca got Keita walking again. His mother lived to see that, and to have hope, before she died. I wish I could find that first photo I took of Keita in his workroom at Djenné's hospital - that would have been Christmas/Tabaski of 2005. Communication wasn't always easy given my far from perfect French, but the last time we spoke, over the phone while Sophie was here for supper on her last visit, was unforgettable for his big, deep laugh at something I said. We also spent quality time together in Meknes, Morocco, when they both joined us at the Riad Lahboul for a couple of nights. Above, the two in the main square; below, in the Riad, Keita in his most splendid boubou. 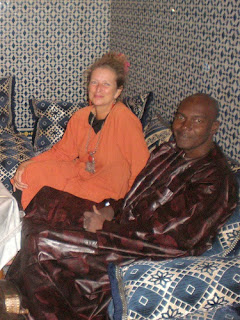 I know that Keita was the rock Sophie needed, both in her life generally and during her time (ongoing, of course) in Djenné - his presence smoothed over difficulties and allowed her to be her usual outspoken self. He'd always have wise judgment to give in conflicts with staff and locals. I never knew a gentler yet more manly, natural soul.

We have yet to hear from Sophie of that no doubt harrowing but - I hazard a guess - still extraordinary week by his bedside at the hospital in Bamako (he became unconscious on Good Friday and died on Easter Saturday). Hope we can be of support to her when she returns. Meanwhile, our thoughts are with her. Echoing the last line of her latest blog entry: Rest in Peace Oumar Keita, Mandé Massa. 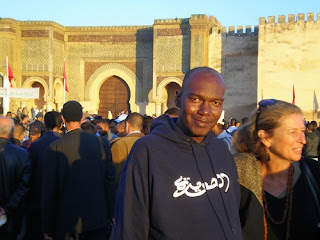 Dearest David,
how lovely and how kind that you have left this tribute.
I have returned to Djenné with Keita's children (three in fact!) for the last bit of the Easter hols. Their presence is healing and I hope and believe it is mutual.
I will be back in London in a couple of weeks.
Much love
Sophie

Glad to be able to honour Keita in some very small way. That scenario sounds good and, as you say, healing, and I hope all is well with the family. Put my mistake about the number of children down to the passing of time since we last visited. Looking forward to fussing over you as much or as little as you require. xx

What fabulous photos of Sophie and Keita. I regret so much not having met him. A beautiful tribute.

Glad to have dug them out. Hope you get some sense of what Keita was like. A pillar of the Djenne community, respected by all.

Thank you for this beautiful tribute.

And thanks for all your kind/perceptive messages on Sophie's blog, Laurent. Pleased to have put you two in touch.